WWhat Are You Doing?

Posted in Limited Information on November 3, 2009

ou just sat down to build your Zendikar Sealed Deck for Grand Prix–Tampa. You have three byes and you're looking to really rip through the tournament. How would you build your deck from this pool?

1 Quest for the Gemblade
79 Cards

This pool's red was pretty weak. Only the Punishing Fire (and maybe the Tuktuk Grunts if I wound up with an ally heavy deck) stood out to me as a card that I really wanted to play. With that in mind, I was able to quickly eliminate red from contention except for a potential small splash if I wound up in green, thanks to the Harrow plus Khalni Heart Expedition, and/or black thanks to the Akoum Refuge.

Once I pushed the red out of the way, I noticed that my white, green, and blue weren't much deeper.

Going by simple playable density I realized that I was going to have to play black as a main color. If I went white-blue I would have enough playables for a deck, but that deck looked pretty lackluster

Then I put together a white-black deck which looked like this:

This deck perfectly demonstrates the problems with white-black decks in Zendikar. There are just so many color-intensive cards in white and black that it becomes very difficult for them to work together.

Let's say you have an opening hand with Plains, Swamp, Swamp, Swamp, Heartstabber Mosquito, Steppe Lynx, and Vampire Hexmage. What do you do on turn one? 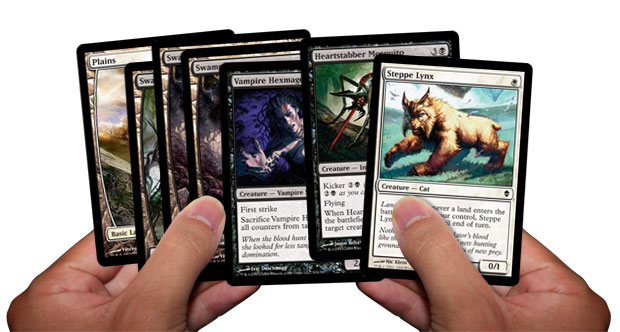 For what it's worth, the right answer is probably to cast the Steppe Lynx, because there are a variety of draws, such as Adventuring Gear, another Steppe Lynx, or Disfigure, that would make your turn two relevant (whereas if you play the Swamp first, the best that you can do is have a Vampire Hexmage on turn two).

This deck, while fairly fast and powerful if it functions properly, just has too many potential mana problems to justify playing. The upside presented by having the potential for a turn-one Steppe Lynx is more that off-set by the cost of needing to run an eighth white source, drawing a Steppe Lynx late when you have moved past your hyper aggressive stage of the game, and having draws where you can't play your

two-drop on turn two if you play a Steppe Lynx on turn one.

So I cut the two Steppe Lynxes, a Plains and the Kor Aeronaut added a Swamp, Bala Ged Theif, Bog Tatters and Soul Stair Expedition, making the deck look like this:

This deck looked a lot better than the previous version. The abstract power level of the deck might have dropped slightly, but as a whole it was now ready to function much smoother than it would have when it was chock full of white one-drops, black one-drops,

Next I fiddled around a bit with blue-black deck and got it down to 42 cards before I realized something ....

... I knew what the core of my deck looked like: it consisted of fourteen black cards and three artifacts. I might be able to cut one of the black cards if there were a sixth card in a potential second color that seemed interesting, but that's just nitpicking. The point was that my deck needed to play a lot of black in order to function properly.

So when I realized that blue was really just offering Welkin Tern, Æther Figment, Sky Ruin Drake, Reckless Scholar, and two Paralyzing Grasps against white's Kor Cartographer, Kor Duelist (which is pretty special in a deck with three pieces of Equipment that give +2 power), Pitfall Trap, Kor Sanctifiers, and Felidar Sovereign, it became pretty clear to me that I would be better off with the white, thanks in large part to Felidar Sovereign.

With that in mind I decided to play the second white-black deck (the one without the Steppe Lynxes). I made that decision because I felt it gave me the best combination of raw power and consistency that this pool could offer.

Understanding What Needs to Go Right

In a booster draft, you have the ability to control your own destiny. Through your draft picks, you will get to consciously decide what is valuable to you every time you see a new pack. Sometimes you will be choosing between two dramatically different types of cards—say, a Welkin Tern and a Spire Barrage. And other times you will find yourself choosing between two cards that appear quite different from one another, but are actually functionally quite similar.

So when you open up your first pack and you see an Oran-Rief Survivalist next to a Kor Aeronaut with nothing else of note, you might think that you are choosing between two wildly different cards. In some ways you are, but in many ways those cards are actually quite similar.

If you end up with a lot of white in your deck, having a 2/2 flier that you will be able to regularly play on turn two will be great. But if you end up only playing a little bit of white, say nine white spells off of 8 Plains, then that Kor Aeronaut will still be good, but it won't be anything special.

The point is that both of these cards need something to go right for you, beyond just playing that color, for them to reach their full potential. In that way, both Kor Aeronaut and Oran-Rief Survivalist actually share more in common with Spire Barrage than they share with Welkin Tern during the first couple of picks of the draft. 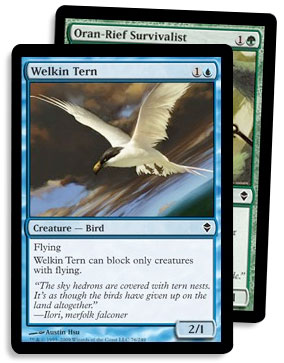 If you take a Kor Aeronaut over an Oran-Rief Survivalist first pick out of an otherwise empty pack, it should be because you have a preference for white, a dislike for green, a reason why you wouldn't want to try to draft Allies, or something else along those lines. Keep in mind that you are taking a reasonable risk by taking a

If you take a Welkin Tern over an Oran-Rief Survivalist, you should do so because you have a preference for blue, a dislike for green, or a reason why you wouldn't want to try to draft Allies.

If you take a Kor Aeronaut over a Welkin Tern first pick out of an otherwise empty pack, it should be because you have a strong preference for white or a strong dislike of blue. The reason why you need to have a much stronger reason to make this pick than you would when you were taking the Kor Aeronaut over the Oran-Rief Survivalist is because Welkin Tern has in game functions that are quite similar to Kor Aeronaut while being significantly easier to cast.

When you are comparing two cards that have similar potential impact levels, where both have about the same level of impact when that potential is reached, then you should take the one that has an easier time reaching that potential.

When you are comparing two cards that have very different potential impact levels, such as Oran-Rief Survivalist when compared to either Welkin Tern or Kor Aeronaut, then you have a lot more to consider. If Oran Rief Survivalist reaches its full potential, it will be better than Welkin Tern or Kor Aeronauts could ever hope to be, but if it doesn't it could end up being pretty mediocre.

Caught in the Web

Pro Tour veteran Ben Stark wrote an article this week on building Sealed Decks. This article is very sharp and clear, and will definitely improve your understanding of Sealed play.

You open up your first pack and you are greeted with

Posted in Limited Information on November 3, 2009