It's Burn Week and things are really heating up here on magicthegathering.com.

Is it hot in here, or is it just Burn Week? 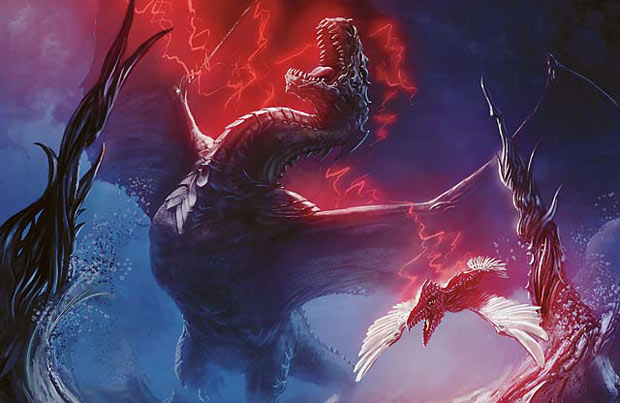 But fortunately for those of us who like it when our opponents are a bit crispy even if my jokes this week are ice cold, there's still plenty to talk about. Burning stuff has always been an awesome thing to do in Limited. From the Fireballs and Lightning Bolts that people were playing in the mid 90s, to the Fireballs and Lightning Bolts that people started playing again this summer, to the Arc Trails and Galvanic Blasts that people started playing a handful of weeks ago.

And, as those of you who've been playing the format at home know, the latest burn spells to come out of the oven have excelled beyond even the high expectations that people had for them.

Let's take a look at them!

In many formats, a card like Arc Trail would be good—but it wouldn't be all that hot.

Why wouldn't it be that great?

Well, it would certainly be good at pretty much any point in Magic's history, allowing you to kill a small evasion creature, or a mana producer that would otherwise give you a lot of trouble. And heck, sometimes you would even be able to kill a second creature with it—putting you up a card for the low, low price of two mana. 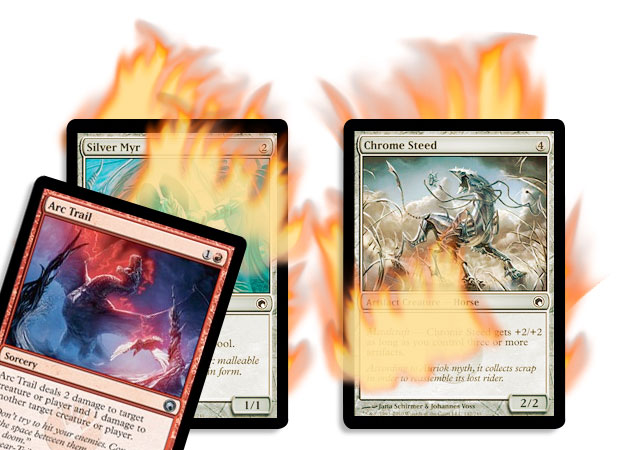 But if games are being dominated by big threats and powerful spells, then being able to scorch little critters won't always be too important. For example, Forked Bolt was a decent card in Rise of the Eldrazi drafts—but there were plenty of more attractive options to choose from in the set. 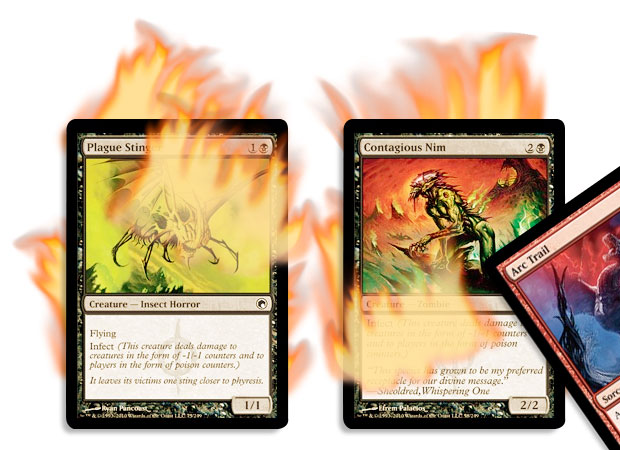 While in a slower format, you would commonly have to use your Arc Trail to trade one-for-one with a low-end creature; in Scars of Mirrodin, when everyone's deck is full of 1- and 2-toughness creatures, it becomes pretty amazing. 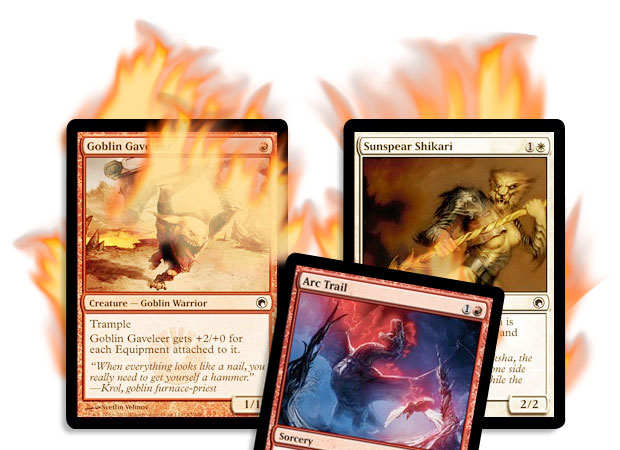 Arc Trail is one of the best cards in the format. Everyone plays with an abundance of 1- and 2-toughness creatures—so killing a Silver Myr and a Chrome Steed, or a Plague Stinger and a Contagious Nim, or a Goblin Gaveleer and a Sunspear Shikari, or even a Spikeshot Elder and an Embersmith on your third turn is a pretty common occurrence. 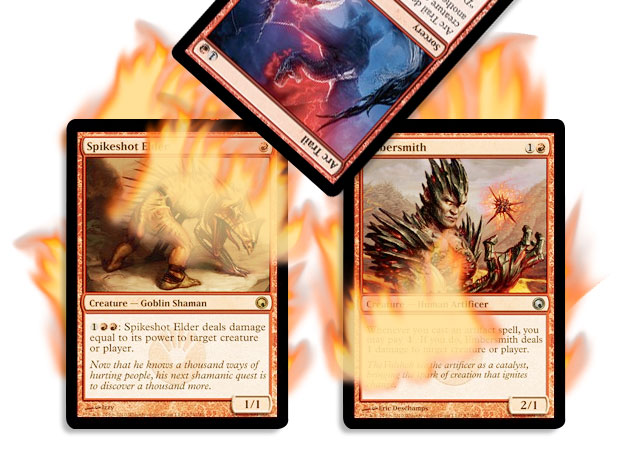 So a card like Arrest, which can deal with pretty much anything for a reasonable—but not altogether cheap—price, would be a stronger pick than Arc Trail in a slower format, like Rise of the Eldrazi Limited. But in Scars of Mirrodin, I will take Arc Trail over pretty much anything but the bombiest of bombs, like Carnifex Demon.

It just does so much for so little mana.

While Galvanic Blast isn't quite up to Arc Trail's level in Scars of Mirrodin Limited, it's still an excellent card to start your draft with. 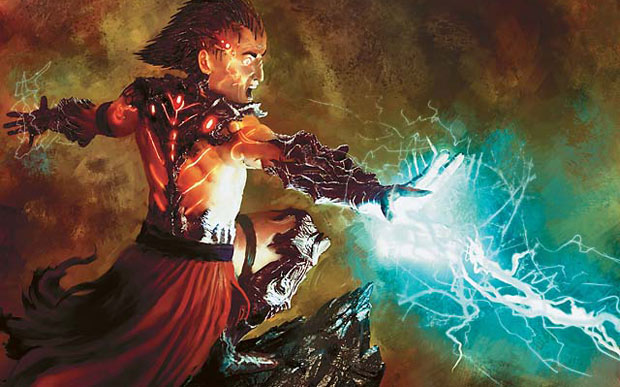 For only one mana, you get an answer to:

You can use a well-timed Galvanic Blast to break up your opponent's metalcraft at instant speed, often leading to disastrous results for your opponent, from which you will, of course, be able to reap benefits. (It's a lot easier to take out a 2/2 Chrome Steed in combat than a 4/4 one).

And that's just if you are using Galvanic Blast to shock things for 2 damage!

If you end up with a bunch of artifacts allowing you to reliably turn on metalcraft, then that's gravy (and gravy does go quite well with a crispy opponent ...). This makes it that much more likely that you will be able to burn your opponent, who foolishly thinks that he or she is safe at 4 life with a locked down board, right out of the game.

Throw a Necrogen Censer or another Galvanic Blast into the equation and all of a sudden you have more reach than even the tallest boxers—allowing you to take down opponents who are sitting at a very healthy 8 life without breaking a sweat.

Burn spells that can target either creatures or players (such as the aforementioned Galvanic Blast) tend to be amongst the most flexible removal spells that you can find. The Galvanic Blasts of the world that can not only take out your opponent's best creatures, but also deliver that finishing blow to your opponent who mistakenly thought that he or she would be safe at 4 life against your metalcraft deck—tend to be really special.

But the ability to kill creatures tends to be the much more important part of burn spells.

This is why cards like Flame Slash, or Turn to Slag, that can only target creatures are still great while cards like Necrogen Censer have pretty limited applications.

Putting Your Burn to Good Use

You don't really need to do anything special to make Arc Trail and Galvanic Blast work other than running a few Mountains (and of course Galvanic Blast gets better if you are playing a metalcraft deck, but that's beside the point), but burn spells that can only target opponents require a certain set of conditions to be good for you.

Next let's look at Exsanguinate (okay, this, unlike Necrogen Censer, actually drains—but I'm hoping you will give me a pass). 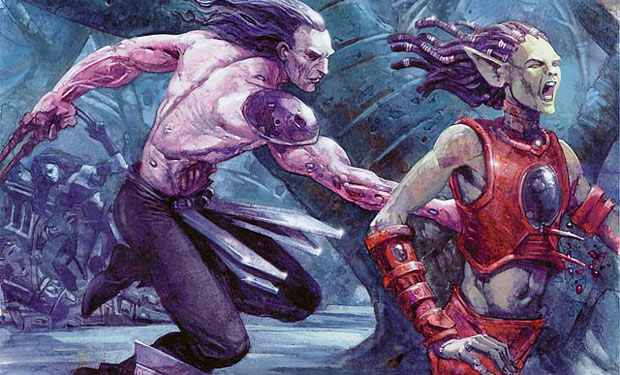 Have you ever drafted a Fireball, or a Blaze, or a Demonfire, or a Consume Spirit, or some other

spell and then felt extremely reluctant to ever use it to kill a creature? 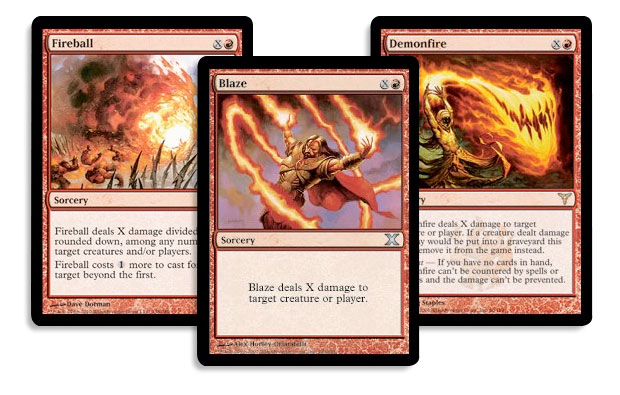 Maybe you break down and Fireball that Spined Wurm because you don't want to get hammered for 5 damage a turn ... but you aren't happy about doing it because you really wanted to save that Fireball to finish your opponent off—with a giant ball of fire!

Yet you probably have no problem passing around an Exsanguinate late, or even leaving it in the sideboard of your black deck.

The reason why Exsanguinate is an okay card is because it's only a finisher. And investing a card in your deck that can only be used to kill opponents who are already at a reasonably low life total just isn't always worth it—especially if you are trying to win by attrition, or with powerful bombs.

The reason why cards like Fireball or Blaze are so good is because of how flexible they are, and how much potential is embodied within them. Yes, you will frequently use your Fireball to kill your opponent. But you will also use it to kill that 5/4, or that flyer, that is giving you fits. And if you're having mana problems, you might even use it to off one of your opponent's aggressive creatures.

But Exsanguinate can do one thing and one thing only.

Sure if you have an Exsanguinate in your deck, you are going to be able to kill a lot of your opponents with it—but you are also going to have a lot of games where it just kind of sits in your hand while your opponent ends up playing one more threat than you can deal with. Eventually you drain your opponent for 5 to get an extra turn, but it doesn't matter, because you don't end up drawing what you need.

The lesson here is twofold:

One: Don't take Exsanguinates too early.

Two: You are probably playing your Fireballs and Blazes wrong. Unless you have a deck that desperately needs a way to win, you should not think of your Fireballs and Blazes as finishers that occasionally can be used as removal spells (but only under desperate circumstances). Instead think of them as multi-purpose cards that can be used to fit whatever your needs are that game. 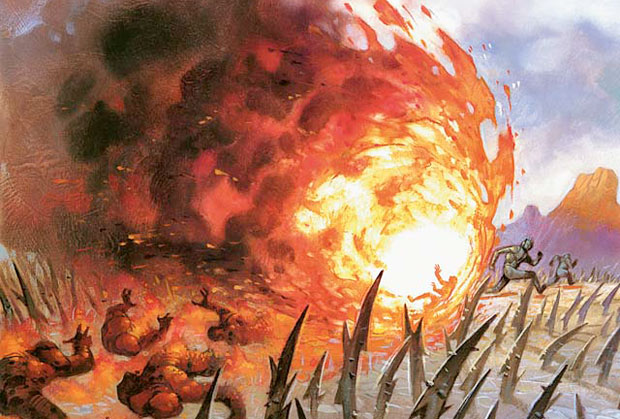 Need a finisher? Then hold onto your

spell until you can torch your opponent out of the room.

Need a removal spell? Poof, your opponent's creature is gone.

Need some insurance for later? Then hold onto your Fireball until your opponent casts a Baneslayer Angel or falls low enough on life for you to be able to burn him or her out with a single spell.