Looking Inside the World of Live Event Coverage

ack in 2011, the combined forces of the Magic web team, R&D, organized play, and the brand team took a long look at our live event coverage. As the event coverage manager, I took up the challenge of blending all these groups' priorities—along with results from an in-depth viewer survey and hordes of anecdotal feedback from Magic fans—into a coherent vision for the future of coverage. We had seen great growth in our Top 8 webcasts and many of us knew we needed to take the big step of streaming live video all three days—and to do it at the high production level we'd been doing Top 8s at for the last ten years. 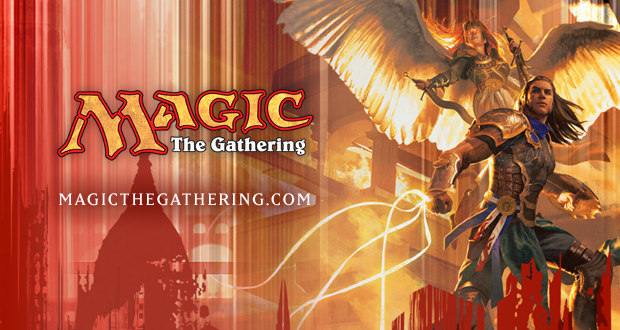 Thanks to the hard work of too many people to mention here and the unflagging support from the higher-ups in Wizards, we kicked that off at Pro Tour Dark Ascension in February of 2012 and we've been building on it ever since. The live Pro Tour webcasts are now being watched by more than 200,000 people over the three-day stream, and the YouTube archives of deck techs and feature matches garner another 400,000-plus views during the week after an event. I'm particularly proud of how we've developed the news desk studio to bring the viewer deeper into the Pro Tour storylines and the growth of the Walking the Planes video series as a companion to live-event coverage.

The Pro Tour and Worlds Week (the combined World Championship and World Magic Cup) will always be our flagship coverage events, much like the majors in golf and tennis. But to build a strong audience, you need recurring content, and that's where the Grand Prix fit in. Having Magic to watch on Twitch.tv as often as possible helps us showcase the compelling player and metagame storylines and grow the appetite for coverage of our major events. We spent much of 2012 building up a staff to handle the increased number of Grand Prix, and I looked at 2013 as a year to build that audience even more.

But it's hard to figure out where to go without a map, so here's a look inside the major goals we laid out for live coverage in 2013.

1. Show All the Cards in a Player's Hand During Match Coverage

For a few years, we've considered the ability to provide a persistent graphic display of a player's hand as the next big coverage breakthrough but couldn't make it work in practice. We were finally able to bring the home viewer that exact information at Pro Tour Gatecrash, taking much of the ambiguity out of commentary. With one show under their belts, I'm excited to see how the commentators use that information at Pro Tour Dragon's Maze next month. Unfortunately, due of the staffing required to feed hand information into the graphics system, we can't add this to Grand Prix coverage at this time. 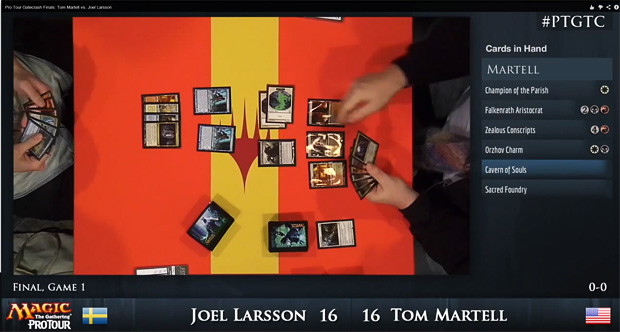 2. Build a Live-Viewing Audience in Europe

Let's get this out of the way right now: Time zones are not my friend. As I was analyzing viewership stats in 2011, I'd see big drops in our live webcast audience when an event was in Europe. It didn't take much to figure out this was because our primary North American audience members weren't bright-eyed and bushy-tailed in front of their computers watching coverage—they were asleep! And with only one or two Pro Tour–level events in Europe each year, the low frequency of events wasn't enough to build a regular audience in that region.

Steps taken toward the end of 2012 laid the groundwork for the complete European video coverage team you see today—a group I'm excited to have streaming from all twelve European Grand Prix in 2013. With five events in the books, the European audience response has been more than I could have expected, matching and sometimes exceeding audience numbers for North American Grand Prix.

Staffing coverage teams for forty-five Grand Prix across twenty countries in one year is a daunting challenge, and while I wish we could do full live-video coverage at all of them, there are some limitations to ye olde coverage budget. Prioritizing European coverage meant that something had to give, and that was live video at each and every North American Grand Prix. In 2013, we'll have official video coverage at twelve of the twenty-one North American Grand Prix, chosen by a combination of format interest and time of year.

However, as restrictions so often breed creativity, I started looking at the rest of the North American schedule for opportunities where other websites could become broadcast partners with Wizards. The fine folks at SCGLive.com did a great job at Grand Prix Charlotte and will be bringing you the action from Grand Prix Miami later this summer. We're investigating other websites that may be able to cover additional Grand Prix with the aim to bring the home viewer as much video coverage as possible.

Here's a complete schedule of tournaments with live video coverage this year:

Watching someone play Magic Online is very different from playing it yourself—specifics like a player's name and life total need to be bigger for the home viewer, for example. Having the ability to move the video feed from match to match also changes how you tell the story of a given round, allowing for a more rapid-fire, "NFL Red Zone"–style of commentary. Finding the right balance between that and the longer-form match coverage done at Pro Tours and Grand Prix will require some work. As those issues are addressed, we'll be looking at more opportunities to bring you live streaming content of big Magic Online tournaments such as Magic Online Championship Series season finals.

The explosion of video content has pushed Magic tournament coverage in new directions for sure. As more manpower and thought are put toward providing the best viewing experience possible, I don't want to neglect the written word. Our analytics show that the appetite for text content is as high as ever, and that form of storytelling appeals to some fans much more than video. I expect the sight of a writer hunched over a laptop next to the feature match table will be around for quite a while, but what I have planned for 2013 are a few experiments with what's being written.

Since the dawn of event coverage, feature matches have been written chronologically, from the first turn of Game 1 to the final turn of Game 3. When no video match coverage existed, this made sense—the reader wanted the drama of the match to unfold while reading it and didn't want to lose the suspense of who won or lost by finding that out first.

But we're in a different world now. The desire to see matches unfold play-by-play is served so much better by live video that the traditional text feature match could use a facelift. Look at how major media retell the events of a single game of football or baseball. When watching post-game video highlights, the narrative is almost always purely chronological and the result is kept secret until the end. But if you read about the same game online or in a newspaper, the writer has picked an angle and frames the game within that storyline, leading with the result and interviewing key players on the biggest moments of the game.

Why not cover a match of Magic like that? To be compelling content, a feature match needs to tell a story... and who better to get inside the story of a match than the two players sitting right there?

When someone asks you how your match went, do you say "I played a Forest and Arbor Elf on turn one. Then my opponent played Island and said go..."? Nope—you tell how the game turned on the Thragtusk you were able to blink at just the right time, or the combat trick you expertly walked your opponent into. So let's get that into the coverage by doing more postgame interviews with the players and working that into feature match stories.

Over the next few events, the writing crew will be experimenting with this new style and we definitely want to hear from you about what you think. In fact, I'll start right now...how does this sound to you?

6. If Something's Not Working, Change It

I put a lot of new challenges on the table in 2012, and not all have worked out as I had hoped. We started the Fantasy Pro Tour on Facebook with Pro Tour Dark Ascension, and while thousands of players have taken part over four seasons, unfortunately it hasn't shown the growth I was hoping for. Because of that, we're putting it on hiatus for Pro Tour Dragon's Maze. Over the next few months we'll be reevaluating the Fantasy Pro Tour with the hopes of bringing it back in time for Pro Tour Theros.

Running live coverage of any kind at so many events requires a large freelance staff, and because coverage isn't a full-time gig, it has its fair share of turnover. That means I'm always looking for new people to join the official coverage team. Along with having a deep Magic knowledge, I'm looking for people with experience in written or broadcast journalism—particularly if you've produced content on daily or hourly deadlines. If you're interested, introduce yourself by sending me an email using the link at the bottom of this page.

If 2012 was all about pushing coverage into new areas, I see 2013 as focusing on continuous quality improvement. I'm confident the path we're on is the right one, but there's always room to make it better. We're always paying attention to feedback on Twitter, Twitch.tv, and the forums, so let us know what you like and what you want to see changed. And don't forget to tune in for live video coverage from Grand Prix Portland on May 11–12 and Pro Tour Dragon's Maze on May 17–19!