's greater elementals are ethereal manifestations of concepts or dreams in the form of a surreal combination of animal elements. The art descriptions given to the artists for these cards got across this idea in bizarre style.

This large creature is an elemental of undoing and forgetting. How to represent it is up to you. One idea is to show a creature with a many-legged giant newt or lizard body, and the face of tawny frogmouth (an owl with an unusually large mouth). The creature's large mouth is the source of the weirdness in this case, with blue light and vapor coming from it, and a fog like that from dry ice around its feet. At its hind end the creature seems to be dissipating into its own fog, as though slipping out of reality.

That description might sound familiar. Ready to identify the piece of art? 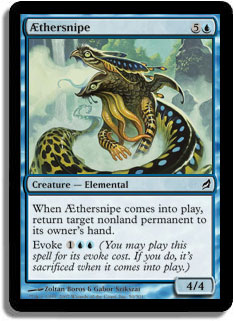 Surprised? This card got its art swapped to Shriekmaw after all the elementals' art came in, but the art description was originally written for the card that would become Aethersnipe.

Want to see another? Here's another art description for a greater elemental:

This creature is an elemental of brute force and destructiveness. How to represent this is up to you. One idea is to show a monster that looks something like a rockfish with horns or something else it could ram things with. The creatures moves across land with centipede-like legs that run the length of its sides. At its hind end, the creature seems to dissipate, perhaps in a way that looks like its scales are drifting apart.

That piece of art, if it hadn't been swapped, would have ended up on this card: 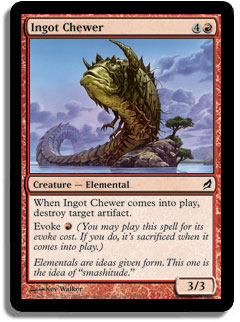 Here's the third piece in the puzzle. This was one more art description for a greater elemental:

This creature is an elemental of decomposition and decay. How to represent this is up to you, but it can't be outright creepy or horrifying -- this is Lorwyn, after all. One idea is to show a creature similar to a giant mole with many blind eyes, but where its backward-sweeping claws would be, instead there are earthworms that flail around and burrow into the soil. At its hind end, the creature seems to dissipate somehow, such as by breaking into pieces that float away behind it.

This was the card it was originally meant for. 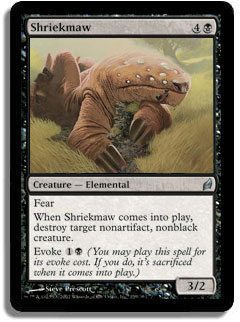 After the final art came in for all these cards, the pieces were swapped around to match the functions of the cards more closely. The rockfish-centipede with horns ended up a huge creature leaning against an island, so it went onto the 4/4 blue card, Aethersnipe. The giant burrowing mole with blind eyes ended up going onto the red anti-artifact elemental, Ingot Chewer. And the newtlike elemental with the tawny frogmouth beak ended up with a black-scaled snake look, and was moved to Shriekmaw.