and welcome to Magic Academy! Today we'll be looking at the skill of analyzing a card's quality, as applied during a draft or deck construction (Limited or Constructed). 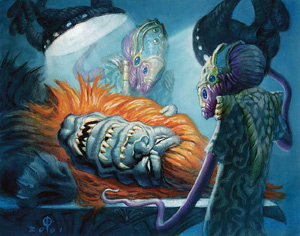 At every Prerelease, throngs of players engage in this activity, scrutinizing new cards and considering their exact potential. In the weeks and months to come, a general consensus will emerge on which cards are actually good, to what degree they are good, and how they are best used. To an extent, card evaluation is done by the Magic community as a whole.

However, having sharp card evaluation skills of your own is important. In Draft, it is regular to have to decide between a common that is known to be good, and a rare whose power is only known more generally. In Limited deck construction, a cut might have to be made between two cards of similar value. In the period of time when consensus is still settling, one must be especially able to decide for themselves what is good. Even once consensus settles, certain cards are incorrectly assessed by the majority, or sneak under the radar. These gems will provide a welcome advantage.

In Constructed, consensus may seem to play a bigger role, with top decklists available for exact use. But the rewards of keen card evaluation are especially great here. An innovative card choice may facilitate an entire new deck which might storm a tournament. Being able to recognize and shore up a deck's weak spots (and weak cards) with stronger ones, or ones better tailored to the current metagame, can be the difference between having a winning deck and a losing one.

Let's look at what is involved in card evaluation, in both types of Magic.

General Baseline Reference: In our introductory Sealed Deck article, we looked at creature quotas: established and understood standards. These provide a baseline for evaluation. We understand that a 3/3 for four mana is a typically solid creature in Limited. Positive augmentation makes it more attractive; negative, less so... etc.

Example: We understand that a 4/4 for five mana is generally good in Limited. A 4/4 for four mana with an ability is even better!

Specific Baseline Reference: Beyond general standards are specific ones. Can you relate this new card to one that existed previously?

Format-specific: There are also considerations specific to the format. Is this card particularly good or bad considering the format? Shatter, normally unplayable, was a first-pick in Mirrodin (the artifact-themed block)!

Example: Typically, 2/2s for two are only okay; in a format with a dearth of good two-drops, though, it is a higher pick than usual.

These are general considerations. They indicate how good cards will tend to be. Other considerations depend on the exact deck you are in the process of drafting or building.

Archetype-specific: Some cards suit certain archetypes better than other archetypes. They may emphasize the archetype's strengths, or help shore up its weaknesses. It's important to recognize the increased value of these cards in these cases.

Example: You're drafting blue-white with plenty of fliers. Normally, a Horned Turtle wouldn't be exciting, but in blue-white, where you'll need some way to hold the ground while your flyers attack, it is stronger than usual.

Deck-specific: Sometimes a card is particularly good (or bad) for the exact deck you're drafting or building. Keep an eye out for something unusual that might just happen to be a perfect fit!

Example: Most of your creatures have no abilities or generate tokens. Muraganda Petroglyphs is great!

Consider this card's effect on the game. Is the mana cost prohibitive?

Example: Akroma's Memorial costs seven mana. Does its effect justify the cost (and risk that some games we will never be able to cast it at all), and is the effect still worthwhile considering it will only come into play in the late game?

Envision its effect on the board.

How versatile and efficient is this card? If a card has multiple functions, is good whether you are winning or losing, or usable even if you are low on mana, it is versatile. This is a bonus. 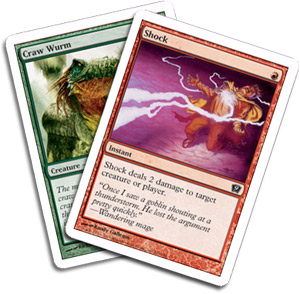 Example: Craw Wurm may be a powerful creature come turn six, but Shock handles specific problem creatures (e.g., Royal Assassin), helps you stay alive if you're stuck on mana, or paves through an opponent's defense with an aggressive draw.

Card evaluation need not occur all at once. If you're unsure about a card's value, make a mental note. When you're playing in a game, consider how useful that card would be if you would happen to have it in your hand at a given time.

When considering a new card for a given format, ask yourself how it compares to the general set of cards seeing play. If Trained Armodon is not seeing Constructed play as is, a similar card (say, a 3/2 for

Specific Baseline Reference: Perhaps a card will be comparable to a specific card in recent memory. How does it stack up?

Format-specific: A card may be particularly useful considering a given format. It may be especially powerful for some reason, or it may fill a certain niche.

If a format naturally facilitates and is rampant with control decks, an anti-control card will be better than usual.

If a format is especially short on Disenchant effects, with a fair amount of targets, a new Disenchant card will have increased value.

The reverse is also true. Many cards that seem good on paper simply don't fit in a given format.

Example: Akroma, Angel of Wrath might be too slow for Constructed in general, but if the format is slow, with plenty of mana acceleration available, and not too much countermagic to worry about, it may be workable.

Deck-specific: A card may be either especially good in a certain established deck (either because it's powerful in its own right, or because it shores up a weak spot), or may even facilitate an entirely new deck.

Example: Mind's Desire may have had a powerful effect, but it did not fit into any established decks when it was first printed. Do the support cards exist to facilitate a certain card's potential?

Again, consider cards you're unsure about in-game. Rumor has it that tournament mega-staple Psychatog was first discovered when being used as a proxy for Shadowmage Infiltrator; imagining it in their hand, players realized how good it could be in practice!

That's it for this week. See you again soon!