and welcome to Magic Academy! This week we'll be looking at the aspect of bluffing in Magic.

Magic is often described as a cross between chess and poker. One element that poker adds to this description is hidden information. In both poker and Magic, but not chess (in the absolute sense and for the most part), there is information private to each player. Private information is what opens the door for bluffing.

Your opponent doesn't know which cards you have in hand. But certain plays you make indicate what you might have or are likely to have (by being consistent with having that card). They represent it. If you misrepresent what you actually have, your opponent may (and often will) make a play that is inferior to the play they would make if you represented exactly what you did have. The risks and rewards of misrepresentation can vary, though. It's important to be able to recognize the most profitable bluffing opportunities. 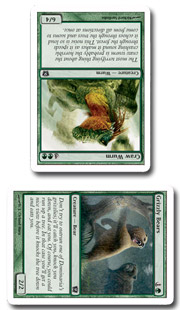 Your opponent has an untapped Craw Wurm. You attack him with Grizzly Bears. To your opponent, it seems that you either have a pump spell or a burn spell, and that perhaps they shouldn't block, or that you are attempting to bluff through 2 damage, and that they probably should block. Whether or not this play, for you, is profitable depends on several factors, divided into two categories.

Risk, which in this case means: how likely is your opponent to block, and how bad is it if they do?

Reward, which in this case means: how important is the 2 damage? 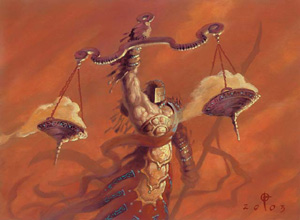 What this means is that if you're ahead and likely to win, it's worth avoiding risks—even profitable ones. If they go your way, well, you were already ahead. If they happen not to, you might suddenly be facing a loss!

If you're already ahead, risk is less attractive.

If you're already behind, risk is more attractive.

There is a lot of variation in what you and your opponent are actually risking in bluffing scenarios. It may be a creature, it may be damage (I attack with a Grizzly Bears into your Lumengrid Warden. I am not risking my Bears, only that I might take 1 damage on the backswing when I would otherwise have an untapped blocker), it may be cards, etc. 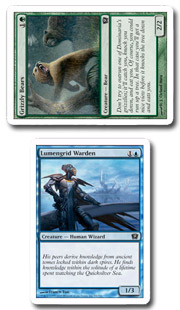 If your opponent's at 22 life, the reward is less valuable.

Aside from some of the general interactions mentioned above, let's look at a few common bluffing scenarios.

Board clearing effects: Consider a situation in which your opening hand contains some creatures and a Wrath of God. Here, the play most generally profitable is to not play your creatures as soon as possible, as you normally would, (or only play one or two as bait) and instead wait until your opponent invests multiple creatures to the board, so that you can make full use of Wrath first.

This is a fairly indirect and automatic bluff. You are representing weakness (I have no creatures to play! You should hurry up and kill me before I draw some or get enough mana to play them.) The risk is that your opponent will realize what you are doing and only commit a nominal amount of creatures to the board, or anticipate your Wrath and have a Cancel ready—ouch! The reward is leaving your opponent low on creatures post-Wrath while you play a steady stream of them.

Does your opponent really have no turn-five play with six cards in hand? Or are they waiting for you to extend into a juicy Slice and Dice?

Lands in hand: In the late game, extra land drawn is often redundant. In these cases, it can be valuable to hold them in hand. To you, three land in hand is useless. To your opponent, three mystery cards hold the threat of a combat trick or a removal spell, which could seriously affect the way they play!

You win if you attack with everything, but if they have a bounce spell you lose. They have three cards in hand, all drawn in the past three turns. Can you attack?

Tricks in damage race: These are the most common and most direct bluffing situations.

Often, particularly when one player has evasion creatures and another doesn't, games become damage races. In these situations, every few points of damage count. Here, calculated bluffs can be very valuable. The damage is significant, and misrepresenting a trick has high value since it might cause your opponent to attack or block awkwardly later on.

Your opponent attacks with Hill Giant into your Air Elemental. You can't afford to block. Finally, you're at 6 life, and he's at 8. It's difficult to justify attacking since he represented Giant Growth earlier.

At the end of the game he shows you he only had land!

No-Risk: Sometimes misrepresenting a card is free. That is, there is no or only marginal risk, for potential gain. In these situations, it is important to recognize the card you can easily and profitably represent. For example, let's say you have a Plains, an Island, and a Mountain in play, and that your opponent knows you might be playing Mana Tithe. You play Goblin Brigands on three consecutive turns. If you tap different mana (Island or Plains) each time, it will appear that you indeed have no one-mana spell to potentially play. If, however, you leave up a Plains every time, the possibility for Mana Tithe exists, and even seems plausible!

It's control on control. Your opponent plays his Watery Grave untapped, takes 2 damage, and passes the turn. Does he have the Force Spike, or is that just what he wants you to think?

No or low risk / low reward

That's it for this week. Please post your own bluffing scenarios in the forums! When and why do you find yourself bluffing in your own games? Does it usually work out?