As a content manager one of my absolute toughest jobs is replacing a writer on a column like Magic Academy. The list of skills needed to pull off a column like this is staggering, it's much tougher on the writer than a more typical column, and by its very nature it also has to be written to stand the test of time. When going through the Academy archive we've got so far, I always knew this would be one of the articles we'd run during the holiday weeks. This article hits just the right starting point and does exactly what it's supposed to in terms of getting the reader comfortably started and opening the door for further exploration down the road. On top of that, this one came late enough in the series that it wasn't run again during the waiting period before new columnist Jeff Cunningham took over. Ted did a great job with a very tough assignment, and I think this article is one of the very best examples of what he managed to pull off.

This article originally appeared on September 23, 2006 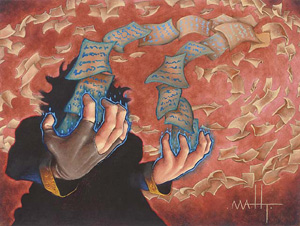 back, my eager students. For those of you standing, please be seated. For those of you sitting, settle in because we've got some hard thinking to do today. Today's lesson is going to introduce one of Magic's basic theoretical concepts: card advantage. More words, both wrong and right, have probably been written about card advantage than any other piece of Magic theory. It was one of the game's early strategic concepts and it continues to guide the play of pros even today. With that in mind, it behooves me to introduce at least the basics to you here today so that you have some understanding when you see the topic come up, and also so that you too can start using it to guide your own play, which will likely make you better at the game of Magic to boot.

Why Should I Care About Theory?

Magic is a game. Games are about fun. Why should you bother learning any “theory” about a silly game – isn't it enough to just play?

A fair question, and one that you will need to answer for yourself. For some of you, the very thought of Magic theory will be a stronger soporific than red wine, turkey, or a bottle full of melatonin pills. If that's the case, and all you want to do is battle with friends without involving too much thought, so be it. Magic is fully able to engage you at that level and should still prove quite enjoyable. However, for those of you interested in using additional areas of your nugget, Magic theory offers additional depth to a game that is already shockingly complex. If you are interested, here is what Magic theory written by the game's best writers can do for you:

Games of Magic are all about the specifics – he made this play with these cards and I responded at this time in order to do yadda yadda yadda. What theory does is it burns away the specifics to give you general guidelines about how the game works.

What Is Card Advantage?

Why is this good? Well, imagine you were playing against someone running the exact same deck as you are, except with their deck they get to draw two cards per turn, and with your deck you only get to draw one card a turn. Which one of you is more likely to win? Your opponent is, obviously. This is true at a much smaller level than a full extra card per turn. Sometimes simply drawing two or three extra cards than your opponent for an entire game will give you a huge edge. Drawing more cards than your opposition provides you more resources, and since Magic is basically a battle of resources, he who has more and uses them best is most likely to win.

For some of you this is intuitive, while others will be out there scratching their heads, still uncertain as to exactly what I mean. Therefore, let's do a couple of minor math problems to give you a more concrete example instead of airy-fairy theory.

I cast Counsel of the Soratami. This spell allows me to use one card to draw two cards, thus putting me up one card net. Voila, you have just created card advantage.

Here's another one for you. I win the die roll at the beginning of a match and chose to draw. This puts me up one card versus what my opponent will start with (8 to 7) because I get to draw on my first turn of the game, but at the disadvantage of allowing my opponent to start before me. Simply by choosing to draw, I have created card advantage.

Aside: Choosing to draw just to get the extra card often isn't worthwhile because it sets your development back. This illustrates that while creating card advantage is a good thing, it's not always worth the sacrifices required to obtain it. Card advantage is one part of the equation. It's an important part, but it's only one part.

How Do I Create Card Advantage?

I'm glad you asked. To me, there are three major ways to go create card advantage.

1) Draw more cards than your opponent.
This is the classic example. You cast Tidings, drawing four cards for the cost of one (the Tidings itself). That's the type of obvious card advantage that everyone understands.

2) Force your opponent to discard cards.
Often casting a discard spell will cost you one card to get one card (like Duress or Coercion), but spells like Mind Rot are guaranteed to hit two cards of your opponent's as long as they have two or more cards in hand. You lose one (the Mind Rot), they lose two, you gain a one card advantage in the process.

3) Force your opponent to spend more cards than you do.
This is the idea of using your cards more efficiently (or playing more efficient spells) than your opponent. By dealing with more than one of their cards with a single card of your own, you create a resource imbalance that should benefit you in the long-run.

Say your opponent is attacking with a Grizzly Bears and decides to Giant Growth his Bears before combat damage to hit you for five. You respond with Shock on the Grizzly Bears, sending both the Bears and the Giant Growth to the graveyard. This play cost you one spell to your opponent's two spells, thus netting you one card. Being aware of and making this sort of play is the very cornerstone of how to play better Magic.

Here's a second example in the same vein. Ben has four creatures on the board. Opie has zero creatures, and casts Wrath of God. This play cost Opie one card in exchange for Ben's four creatures, a pretty good deal by any accounting standard.

The examples for the practical application of card advantage in actual Magic are endless, so be on the lookout to exploit them whenever possible.

When Eric “Dinosaur” Taylor originally pitched this concept, it was defined as “card advantage when no one loses cards.” The classic example for this is playing a Moat against your opponent's army of ground pounders.

You haven't killed all the creatures like you would with Wrath of God (thus making it virtual), but you have now locked down her entire opposing force with a single card.

Special Case: Why is Howling Mine not Card Advantage?

Many beginning players see Howling Mine and flip their lids over the idea of drawing two cards a turn. This in spite of also noticing that it makes the opponent draw an extra card per turn as well. This is what we call a symmetrical effect, and it doesn't net you any card advantage on its own because, while it draws you extra cards, it does not draw you extra cards in relation to your opponent.

Let me put this another way – you cast Howling Mine. Who gets to draw a card from it first? Your opponent does. What happens if your opponent just Naturalizes Howling Mine before your turn? You get to draw zero extra cards, even though you invested a card to do it, while you opponent is happily sitting there with one extra card in hand.

Alright class, I can see that the meter for your brains is full to overflowing, so we will adjourn for today. I hope that you have found this initial foray into the wild world of Magic theory a rewarding one and that you will make frequent returns. For those of you interested in continued study in this particular case, check out the readings I have posted below for some of the original work in these areas.

It's been a while since the old man wrote, but edt was one of the foremost thinkers and innovators of Magic theory. “Tempo and Card Advantage” and “Virtual Cards in Urza's Block, a Sub-Category of Card Advantage Theory” are two of his classics on this specific area of Magic fundamentals.

There have been numerous other articles written explicitly about this particular topic that can be found through a simple internet search, but many of them overlap or are downright confusing/contradictory in how they tackled this topic. Therefore I'm going to leave you with just edt's work this time around, and a warning not to believe everything that you read.