and welcome to Magic Academy! This week, we'll be reviewing the basics of combat and looking at some common scenarios.

Combat is the tactical centerpiece of the turn. Though the correct play will be highly specific, similar general situations occur with regularity. Being familiar with good approaches to them is important. 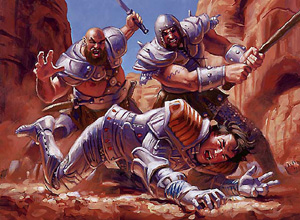 Since you control which creatures attack on your turn, your goal is to select the ones that, attacking, will best further your position in the game. You must of course consider relevant spells (especially combat tricks) in your hand, and the spells your opponent might play. You must consider your opponent's potential counterattack. You must consider life totals.

Tip: One way to help figure out whether a certain attack is profitable or not is to arrange your creatures against your opponent's in the way you think they will block. A visual display can help clarify which attacks might be irrelevant or useless, or which ones will be overwhelming.

While all the steps have their purpose, the meat and potatoes of your attack phase is the declare blockers step ("before damage on the stack") and the combat damage step ("after damage on the stack"). Those are the points after blockers, before damage is locked in, and after it is locked in, but before it resolves. These are the key points in which to navigate combat-related spells and abilities.

Before damage is your last chance to augment creatures' power before they can assign damage. That is, to pump one of your creatures with a growth spell so that it has enough power to be able to kill a blocker, or to shrink a blocker with a spell like Feebleness, or outright kill it, before it can assign damage. You might also somehow give an attacker trample, so that you will be able to assign damage to your opponent. Playing combat spells and abilities before damage is on the stack (and making attacks that will force you to do so) carries a certain risk. If your creature is somehow killed, it will not deal any damage. You attack with a Grizzly Bears and your opponent blocks with Hill Giant. You play Giant Growth. He plays Shock.

Plays made after damage is on the stack carry less risk. You play a damage prevention or bounce spell to save one of your creatures. Even if your opponent kills your creature in response, the combat damage it assigned will still soon resolve. This means that unless we must play a spell before damage is assigned (e.g., a Giant Growth to bring its power to the necessary level), we will wait until after damage is assigned. It also means that you should approach situations in which you must make your move before damage is assigned, while your opponent has mana up, with caution.

This leads us to our first scenario.

Attacking with a trick into untapped lands: You have a Grizzly Bears and a Giant Growth. Your opponent has a few cards in hand, untapped lands, and either a) a Hill Giant in play or b) a Viashino Warrior in play. Assuming you want to kill the blocker and save your Bears, the risk involved in each possibility varies widely. In the first situation, you will be forced to use the Giant Growth before damage, and risk losing both the Bear and the trick to an instant removal spell. In the second situation, you will be able to wait until damage is on the stack to save your Bears; an instant removal spell from your opponent here will not also nab your Giant Growth.

Attacking with a trick you will be forced to use before damage, into untapped lands, carries increased risk.

Alpha striking, and forcing blockers: When and why should we just attack with everything (or most things)?

Of course, if our opponent has no mana available, and the amount of unblocked damage we are guaranteed exceeds his life total, we'll attack with everything (say, three Grizzly Bears against two Hill Giants, with the opponent on 2 life). If the opponent has mana up, this situation becomes more complicated; a single removal spell will result in a wiped board for you. Here, you will have to decide between waiting for another creature or taking the risk.

Another good reason to attack with plenty of creatures, instead of just the big ones, is because it makes it harder for your opponent to make profitable and safe gang-blocks; their doing so might result in a lot of creatures getting through. Your opponent has four Hill Giants. If you attack with just Enormous Baloth, your opponent might as well block it with everything; a Giant Growth here will still result in the death of your fatty. If you also attack with your own Hill Giant and a Grizzly Bears, however, your Baloth is likelier to only be blocked by minimal defenders.

Extending this point, even when an alpha strike would not be lethal, it is often correct if the opponent will be forced (due to life total) to make certain unfavorable blocks. For instance: our opponent is at 3 life. We have a Grizzly Bears and two Royal Assassins in play. Our opponent has a Grizzly Bears. We can attack with everything without having to worry about losing an Assassin, as our opponent must block the Grizzly Bears here. If you have six creatures and your opponent has six creatures, you may not be able to kill them this turn, but you know they will be forced to block every creature you attack with, and that they can't gang-block—perhaps this advantage will enough to motivate an attack.

Of course, one of the most crucial aspects of alpha striking is making sure that your opponent can't just block to survive, and then untap and attack you back for the win!

Maximizing combat-relevant abilities: Permanents such as pumpers (Ghost Warden), healers (Samite Healer), and pingers (Prodigal Pyromancer), all have very relevant abilities in combat, even on a clogged board. They can't make all of your creatures bigger at once, but they can make one creature (functionally) bigger even after your opponent commits their blocks. This, in a way, makes all of your creatures more threatening. If you attack with two Grizzly Bears with a Prodigal Pyromancer waiting, your opponent will be forced to trade his Hill Giant no matter which Bears he blocks.

Maximizing combat-relevant abilities can depend on the number of defenders your opponent has that require help to get through. With two Grizzly Bears and a Pyromancer against a Hill Giant (and even another Grizzly Bears), you can attack with both Bears. However, if your opponent has two Hill Giants in play against your Bears, you can only profitably attack with one; otherwise, they can block both. This means that on a clogged board, with combat-abilities that can make an attacker as big or bigger than the toughest defender, it is often profitable to attack one at a time. However, sometimes the advantages of an alpha strike—pushing your opponent away from gang-blocks—will be enough to encourage you to make bigger attacks, knowing that your combat abilities will leave you better off than your opponent once the smoke clears.

Considerations of inevitability: As discussed in Introduction to Inevitability, deciding whether to attack can depend on your long-term position. If your long-term chances look bleak (e.g., your opponent is getting further and further ahead each turn with Archivist), you are motivated to attack and try to end the game as quickly as possible. If your long-term chances are strong (you're the one with the Archivist), you are motivated to slow the game down to maximize your advantage. Inevitability can take many forms. A fog effect in hand usually motivates you to race. A bomb in hand usually motivates you to stall. 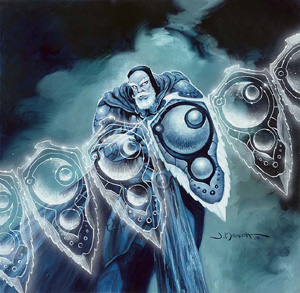 When blocking we must try to find the most positive exchange possible considering the creatures our opponent has selected to attack. Again, we must consider life totals, cards in hand, and opponent's potential cards in hand (partly informed by any suspicious attackers).

There are a few important differences to understand when blocking.

Baiting: The defending player always has priority second—the attacker will have to act at each step before they do. This opens the door for traps. Rather than simply removing a creature on your own turn (say, with Terror), consider whether you could try to draw a pre–combat damage trick out of your opponent first. You play a Llanowar Elves and pass the turn. Your opponent attacks you with Craw Wurm. He plays Fury Charm, intending to trample past for 6. Now you play the Terror. If your opponent doesn't turn out to have a trick in the first place, well, you can always play the Banishing before damage anyway.

Maximizing defender's advantage: The offender can only attack the opponent, but the defender has the choice of which exact creatures he wants to block and how. This is an advantage that can be maximized. If your position is strong, you can minimize potentially risky damage and chump block as necessary. If you are behind, you can take damage more liberally, and make only the most profitable blocks to try to get yourself ahead on the board.

Safety-blocking: You have the benefit of knowing your opponent's attackers before you have to commit to blockers. If your opponent is only attacking with a few creatures, and you would have extra blockers, the option is always open to block them with more than enough lethal damage, in case they have a trick. In some cases this means that a trick will only allow them to trade, and not to keep their creature. Though this can be ill-advised, depending on the exact situation, and the potential trick (Venomous Breath—yikes!), it is a play that comes up a lot.

Further reading: Quentin Martin's article Combat Tactics illustrates how specific and deep even the most innocuous looking combat situations can be.

See you next week,