and welcome to Magic Academy! This week we'll be looking at some basic and important rules of thumb. They all fall under the category of efficiency.

Over several games of Magic, minor advantages (or disadvantages) will begin to add up. With this in mind, it's important to design your approach to the game to be as efficient as possible. That is, to maximize the usefulness of your cards.

Most of these tenets apply mainly to deck building, although sometimes they require conscious application in-game.

A basic unit of power in Magic is mana. Ideally, you want to be using all of your mana every turn. Any mana left unused has gone to waste. Design your deck to use all of its mana.

This means a full and carefully balanced mana curve. A full mana curve means having some way of utilizing your mana once you have an abundance of it (this is the top of your curve). One way to do this without danger of clogging your opening hands with expensive spells is to include cards that make use of mana but can also be played cheaply. For instance, Blaze can be played for 2 mana against a 2/1 on Turn 2. It can also scale up to use all of your mana on Turn 10 for a powerful 9-point game-ender.

It also means the inclusion of Turn 1 and 2 plays, even if they may not be as powerful as more expensive cards. If you have no plans to otherwise use your mana in these first few turns, any cheap spell you include might as well be free! They have a much lower chance of being clogged in your hand than expensive spells. Considered in this way, it's easy to see why simple cards like Sleight of Hand are so useful. Even though their effect may seem relatively marginal, the fact that they are so easy to play (especially if you're not using the mana to do anything else) makes them a good deal.

Another reason why cheap spells are efficient is because they can be easily adapted to the mana requirements of a given hand. Whereas a 4-drop will almost always demand a full turn's mana, a 1 or 2-drop can be used to fill the holes in a turn's play, and ensure that mana doesn't go unused.

Maximizing your mana use also requires attention in-game. If you get your spells out of your hand faster than your opponent, you will be poised to put them on the back foot; an advantageous position. I try to organize my early-game plays to make the best use of my mana.

Let's look at a few ways to make the most of your spells.

Synchronize mana cost with purpose: Depending on the deck, certain effects (counter-magic, card-drawing) will be best suited to a certain phase of the game. Include cards with costs that allow them to be played during this phase of the game. For example, while Haunting Hymn is a more powerful discard spell, hypothetically the reason you are including discard in the first place is to help ensure that your deck's critical Grave Pact resolves on Turn 4. Coercion would be a better choice in that case, since you can play it before you would want to play Grave Pact.

In-game, play cards in an order that suits your purpose. Consider a hand with Air Elemental and Tidings on Turn 5. Here, generally speaking, it is best to play the Air Elemental first, and then the Tidings. The main purpose of the Tidings is to ensure you can play a steady stream of threats or answers. In this case you already have a good threat and don't need to refill yet.

Resilience: If possible, choose cards and strategies that are difficult to deal with, and have staying power. Some Combo decks do this by choosing avenues to victory that are unusual. This may leave conventional disruption useless. For example, recent decks based on the Dredge mechanic are extremely difficult for unprepared opposition to beat since they operate using an unexpected resource (the graveyard).

Does your deck have any sort of defense against heaps of hand destruction? Or against a quick creature deck? These are questions to ask yourself. Having multiple avenues to victory (for example, a Combo deck that can also win just by attacking with creatures), is a nice feature some decks have.

In short, spells involved in strategies that are offbeat or difficult gain value.

Manage density: In "Sealed Deck Walthrough" we looked at a concept I call density. Density is a card's capacity to win the game on its own. Shadowmage Infiltrator is a dense card; unabated, it will quickly swing the game in favor of its owner. Smother is not a dense card; at best, it will trade with a small creature, end of story.

Though dense cards are more recognizable as Sealed Deck bombs and tournament powerhouses, it is important to balance your deck with both.

Dense cards need support. A Mana Tithe, which may be useless beyond the early game, and may only serve the function of trading 1-for-1 at best, helps buy time for more powerful cards to come online—make sure you have those powerful cards! What are you going to do to make best use of all those extra cards from Shadowmage Infiltrator? Once you're ahead on cards, cheap 1-for-1s are a great deal!

Synergy: Choose cards that naturally work well together. A deck need not be "Combo" in order to contain beneficial synergies, and to avoid dissonances.

The better your cards work with each other, the more value you extract from each card. 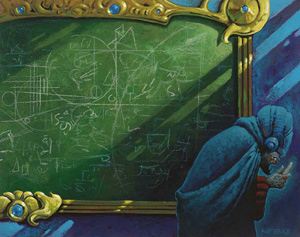 Let's review some basic numbers. 60 cards, of course, is the standard for tight tournament decks. This is to ensure the best chance of drawing the best cards, and also to maximize the predictability of the mix. There may be fringe reasons for going above 60 cards, but they are very marginal. 4 of a card is the maximum (not counting basic land). Generally, we want to play 4 of our deck's better cards; this gives us our highest chance of drawing them.

As you learn your deck more thoroughly, you will be able to fine tune the numbers. Here are a few ideas to keep in mind when fine tuning:

That concludes our tally of efficiency reminders for deck-building. Of course, one of the most difficult (and fun) aspects of deck-building is not just to recognize these factors, but to manage them all at once.

That's it for this week! See you next time,