Introduction to Mana base

ello, and welcome to Magic Academy! This week we'll look at the aspect of deck construction known as the mana base.

The term mana base refers to the mana producing cards (primarily land) in a given deck; the means by which a deck is able to cast spells. Every deck has its own certain needs, and there are many ways to construct a mana base that will facilitate these needs. More or less land can be played. Greater or fewer different colors of land can be played (and be either basic or multi-colored). Colorless lands with special abilities can be played. Acceleration can be played (mana producing non-land permanents). Fixing can be played (mana-selecting spells). These decisions are motivated by the deck at hand. At the same time, if a deck demands too much of a mana base (with inadequate space for land, or overly difficult color requirements), then it may have to be adjusted. This is a back-and-forth that regularly occurs.

Deck mana bases represent one of the most plainly mathematical aspects of Magic. Though knowing the exact math might be helpful, only a simple understanding is necessary. The general goal is to be able to play all of your spells all of the time (that is, whenever you would ideally want to cast them), and a good mana base aims to achieve this goal as often as possible. If you play an Elvish Warriors (which costs 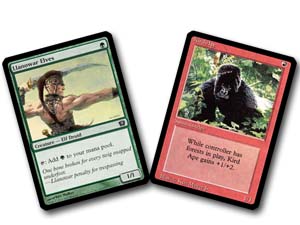 How many cards of each color are you playing?

(26 Green, 10 Red) If you're playing a mono-colored deck, your task is made easier. Rather than having to work out a correct balance between two or more colors, acceleration, and fixing, you can simply worry about a balance between the appropriate basic land, beneficial non-basic lands (IE, Quicksand), and acceleration. However, it will certainly not always be the case that you only play one color.

How many cards of each color are you playing? Knowing a deck's color ratio will help govern the color ratio of mana used.

However, this ratio should not be followed exactly. It is difficult to win if you can't play all of the cards in your hand, even if you can play most of them. Again, we aim to be able to play all of our cards most of the time. Also, it is usually the case that any additional land of a color beyond the first or a second is redundant. Even if we were to have twice as many green spells as red spells, it is more important that we have (at least) one Forest and one Mountain than it is we have two Forests and one Mountain. That said, we still want to pad our green spells since, one, if we have to draw only one or the other, we would much rather it be a Forest and, two, there will be turns when we play more than one card. In these cases, since we have more green cards than red cards, we will need some extra Forests.

In general, the fewer colors you play, the less land you'll be able to play, since you'll have to worry less about bringing the amount of mana-support up to a sufficient level for each color. But that only goes a little way, because the amount of land any deck actually plays is more related to how much its cards cost, and how long it expects the game to go.

How much colored mana do these cards require?

versus one that costs

means a very different thing for a mana base.

Heavy color requirements mean that extra copies of land take longer to become redundant. With this in mind, heavy color requirements on cards can fit much more smoothly into colors which are already heavier, since we are already inclined to play more of them, and so there will be more that would naturally become redundant, but are more difficult to support in fringe colors.
I may have fewer red cards than green ones, but I need 3 Mountains and 2 Forests (or Llanowar Elves) before I'm able to cast all my spells. My mana base now will reflect the tension between this fact, and the fact that I have more green cards than red ones.

When am I casting my spells?

A Goblin Balloon Brigade and a Searing Flesh both are single cards, and both only require one red mana. However, their mana requirements are vastly different. One is ideally played on the first turn, when only 7-8 cards have been seen by their owner, and the other will generally be played on turn 8+, when 15+ cards have been seen by its owner. In the latter case, less red mana is necessary to support the card, but more mana in general. In the former case, less mana in general is required to support the card, but more red mana.

This is less of a factor than the other three since, in general, all your spells are important, but occasionally certain cards rise above the rest. For example, some decks need to be able to cast Wrath of God by turn 4 in order to survive, and will want to bias additional white mana to further increase the odds they will be able to do so.

This is all, of course, just getting the ball rolling. Join me next week when we consider how mana-fixing, mana-acceleration, and non-basic lands factor in, and take a shot at an actual mana base.