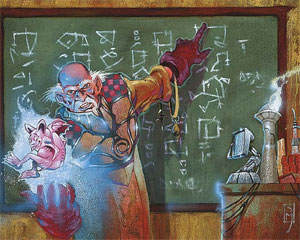 and welcome to Magic Academy! As this is the 48th and final installment of Magic Academy, this week we'll be taking a look back at the series.

When Scott Johns first contacted me about writing this column, he billed it as one of the most important in the game's history. Where previous broad and educational Magic columns were either antiquated or incomplete (note though the valiant efforts of Joe Crosby, and Andrew Johnson), Magic Academy was to be both modern and comprehensive. It would also be fundamentally practical, aiming to provide clear and relevant lessons, and an organized reference, for newer players. More specifically, Scott wanted a bridge so that newer players that could muddle their way through a game but weren't up to the speed of the rest of the Magic Internet had a place to go where they could read what they needed in one friendly place.

The significance of the column's vision is even clearer to me now than it was then. I realize now how much of what veteran players understand about Magic had gone (and continues to go) unarticulated. Try giving a formal definition of mana screw (if you play too few land, and draw too few, are you really screwed?), or explaining the relevant differences between playing 1 Shivan Reef and 1 Plains or 1 Battlefield Forge and 1 Island, and maybe you'll see what I mean. On top of that, what little there already was out there was so scattered across the Internet that novice players had little-to-no chance of finding what they needed.

As soon as I began writing the column I realized how deep it could extend; every topic
seemed to point towards several sub-topics, and comprehension of any subject would be aided by workshop articles. I had anticipated the series would run longer, even indefinitely.

Ultimately, though, the terms comprehensive and practical don't quite stand side by side. To be comprehensive requires the thorough exploration of even the most fringe theories. However, practicality demands that our topics be essential and applicable. This leaves us where we are now. I think the articles collected are fairly comprehensive of practical theory-- and that actually seems like a good finishing point. From here, more specific and advanced strategy articles around the net should at least be legible. Put another way, we believe at this point that Magic Academy has done its job of bridging the gap between novices and more knowledgeable players. From here, there's plenty of writing that can be done, but at that point we're talking more like Zvi's "The Play's The Thing" than Magic Academy. However it plays out, hopefully other writers will build on the foundation we've built here. Whatever they do and wherever they do it, Magic Academy will remain as a one-stop shop for novices that want to get up to speed, and a place where they can so at their own pace.

I hope that you find the column useful either for yourself or for newer players that you know. I hope also that the existence of this column as a reference will provide some sort of groundwork for further theoretical discussion of the game.

For this final article, and thinking of Magic Academy as a reference, I wanted to provide a complete catalog of all articles contained in the column, arranged by subject and difficulty level. Thanks again for reading, and see also below for some follow-up comments from site manager Scott Johns on where things go from here.

These articles are about the way the turn works as a whole. The formal structure of the turn, and how it is relevant to gameplay.

The Constructed-specific articles center on the natural strategies (decktypes) that emerge in Constructed formats, and how they interact with each other. There is also discussion here of how to approach designing a mana base given the many options available in Constructed.

The Limited-specific articles center on the basic strategies of Sealed Deck, and Booster Draft. There is also discussion of when to mulligan in Limited, and how to play under less-than-ideal mana circumstances.

These articles outline fundamental Magic concepts. Being familiar with these ideas is a crucial part of being able to take your game to the next level.

These articles approach the game from a broader standpoint.

For further reading, I would strongly recommend "Limited Information" for draft and sealed formats, "Swimming with Sharks" for Constructed formats, and lastly Zvi's column "The Play's The Thing" for a good look at the kinds of decisions players face when actually playing a game of Magic.

Thanks, it's been fun!

First off, I want to take a quick moment to weigh in on what an incredible job Jeff has done with this column. Anybody that's ever attempted anything involving writing for a novice audience knows just how difficult it is to maintain quality of writing while still keeping the lesson as clear and accessible as possible. Jeff managed to pull that off while consistently putting out some of the best strategic content available anywhere on the web. The amount of email and other feedback I've received from novice and experienced players praising how much Jeff has helped them is testament to how well Jeff accomplished the goals of the column week in and week out.

So, obviously the big question is where things go from here. As Jeff said earlier, at this point we believe Academy has done its job of providing a bridge for novice players to get up to speed enough to be able to read sites like magicthegathering.com. To be honest, Magic Academy has probably gone far beyond that goal, because I'm confident that anybody that reads through the entire Academy series is going to be well above the level of our average reader. So, as far as that goal, I'm willing to put a check in the "done" box.

However, that's just one part of the overall goal. Now we have a good path for novice players to get up to the level the rest of the site is written toward. Next we need to focus on a step that's even less served: the brand new player that knows nothing at all about the game. Academy is a powerful resource, but it's no good for the completely new player that has no idea how to play. Moving forward, much of our planning will be focused on finding an online experience that helps that new player through learning to play the game. Whatever that new experience is, if it can get a brand new player to the point of being ready for Magic Academy, we know we've done our jobs right.

With that goal in mind, I should let you all know that we're in the process of completely re-evaluating the content we host on magicthegathering.com. In terms of content, this site and pretty much any other Magic site I can name have basically been online versions of article-based print magazines. That's not to say we're getting rid of articles, but it does mean we're willing to look at things from a completely new perspective and decide what kinds of content we can host that takes maximum advantage of what the web is capable of, and in the process meets what you're looking for and what we need to accomplish as a company.

So, in addition to a likely complete redesign sometime next year, in the meantime we'll also be working on plans for a much better new player experience as well as providing a better home for what we already have in Magic Academy. (The current Magic Academy homepage could be a lot more useful and inviting for newer readers, plus several of the articles should probably be switched in order. For example, note that to a new reader Jeff's article above is a lot more useful as they start reading the column, rather than being at the end.) The end result is that we won't be continuing a column in this Saturday space, at least for this year. While we've had a Saturday column since the original launch of magicthegathering.com, since then we've increased our event coverage on the site, not to mention the addition of Hall of Famer Raphaël Lévy's "Ask the Pro", which updates three times a week including Saturdays. For those that just can't get enough to read, I can tell you that there are also significant plans in place for once Gleemax.com is up and fully running.

Overall, it's an exciting time and there are some very big things on the horizon. I don't blame anyone for being skeptical (especially this audience!) but I'm confident that as you see what we've got in store, you're going to love it.

Introduction to Combat by, Jeff Cunningham

Hello and welcome to Magic Academy! This week, we'll be reviewing the basics of combat and looking at some common scenarios.Combat is the tactical centerpiece of the turn. Though the corr...