Here's the list, as provided by TrophyHunter in the forums:

"The aim of the deck is to play some small mana-creatures in order to accelerate into a turn 3-4 Sek'Kuar, Deathkeeper. The next turn - in your beginning of combat step - you put all mana from your mana-creatures into your pool, sacrifice Martyr of Ashes to get some 3/1 hasty creatures, attack with them and cast Run for the win. The deck won every now and then, but lost mainly due to mana issues.

The mana requirements are quite difficult, as you need green mana in turn 1 and green, red and black mana when you cast Sek'Kuar. Then you need 7 mana to sac Martyr and play Run the same turn."

I am going to avoid tuning the deck and discussing its viability, for the most part, and instead focus on how to develop any rough idea through the manabase stage.

That said, I have made a few tweaks that I think maintain the original idea, while making its strategy more robust. This gives us more to consider when designing a manabase.

I cut the 4 Shocks and 4 Dead//Gone for 8 other red cards (keeping with Martyr): 3 Akroma, Angel of Fury (to give us another three-mana spell, and something else to do with all of our mana and acceleration), 3 Greater Gargadon (another threat, and another sacrifice outlet for Sek'Kuar), and 2 Stormbind (so that we still have some removal, a backup plan, and a use for extra land). In short, we now have options even in case we don't draw Sek'Kuar, draw it but don't draw Martyr of Ashes, or other contingencies. 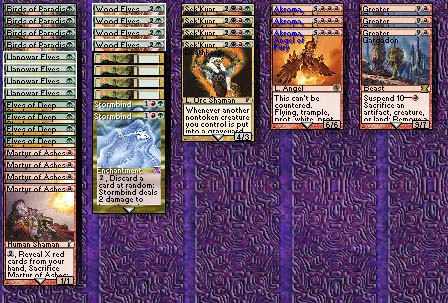 Now let's apply the seven steps from last week to arrive at a mana base.

1. Make sure your deck is at least reasonable for the format.

This is a Standard decklist, so we'll have to limit our scope to mana sources available in Standard-legal sets. Currently, Standard includes the multi-color themed Ravnica block, which features many excellent multi-lands. In addition (and even if Ravnica wasn't around), there are the core set's fine painlands. In general, we're looking at some good options. Are they enough for the build at hand?

The answer is yes:

There is much to consider, no doubt, but proceeding is certainly reasonable at this stage.

2. Determine, roughly, how much space you have for mana.

As I mentioned last week, acceleration is often tied closely enough to a deck's core concept that it's included even prior to development of the manabase. This is the case here, with sixteen cheap mana-acceleration creatures already in the mix!

That's a lot. The typical issue with running so many acceleration cards is that, since they can't replace land, and can only even affect your manabase to a point, since you generally want to keep playing land every turn while you're accelerating, they replace cards that actually have an active effect on the board. In this case, however, they also serve multiple other functions: They can be converted into 3/1s with Sek'Kuar, and they can become potent attackers with hit. Although we might want to eventually trim one or two, they seem in general to be a core part of the deck. So how do they affect the amount of land we'll want to play?

In order for the acceleration to be worthwhile, we will want to be playing Land at the same time. We want to make our land drops 1-4, although after that we don't need much more. Our most expensive spells cost five mana and six mana (to unmorph). Fortunately, our strategy is pretty early-game oriented, so late-game landflood should be less of an issue.

Extra land has some function here. We can discard it to Stormbind, sacrifice it to Gargadon, or use it to cast Run without having to tap a mana-creature that could be attacking.

I estimate that, despite all the acceleration, we're still going to want to play about 23 Land. I've set aside room for 24 already. I'll put in a single copy of Boom//boom for now, and will consider the possibility of adding another spell as I progress.

Our other requirements are fairly basic and are likely to be satisfied by satisfying these.

How much green mana do we need to be able to play our accelerants on turn one very reliably?

How much red mana do we need in order to have three by turn four reliably?

In this case, we can factor in nonland sources: Birds of Paradise (which is somewhat less reliable than a land, since it can be killed) and Wood Elves (fetching Stomping Ground). Playing 20 red sources gives us about a 70% chance of being able to flip Akroma by turn four (assuming we draw it and acceleration). Playing 15 gives us about a 50% chance. Playing 25 gives us about a 90% chance. We'll aim high - 20+ Red mana-sources - but this is beginning to push the threshold of what is reasonable.

If we satisfy these, then the question with Sek'Kuar becomes: How much black mana do we need to have one by turn three reliably?

Again, here we can factor in nonland sources: Birds of Paradise, Elves of Deep Shadow, and Wood Elves. This makes it a lot easier to err on the high end, because we will already be playing at least 13 sources! With 13 sources we already have about a 90% of having a Black source by Turn 3 (although the fact that some of our sources are fragile reduces this). With 15 sources we have a 95% chance. We'll probably aim somewhere in the middle, and will plan ultimately to only play a few black-producing lands.

Firstly, what are our options? Because the acceleration/fixing component of our deck is taken care of already in this case, what multi-lands are available in Standard?

Shocklands (Stomping Ground, etc): These are strong cards. Though our deck will probably incline us to take the 2-damage a fair amount of the time in the early game, that's still a cheap price to play for a multi-land. We'll probably use these.

Painlands (Karplusan Forest, etc): These are also strong cards. Since our deck only needs to play color-intensive cards once or twice, these shouldn't cause us too much harm. We'll probably use these.

Bouncelands (Gruul Turf, etc): While the coming into play tapped doesn't help our green requirement much (since we want to play our Elves etc. by turn one), we may be scrambling for additional multi-sources. The specific nature of the bouncelands (eventually they will allow you to get 3 lands worth of mana out of 2 lands) make them attractive. They might allow us to justify playing fewer land. Always something to consider.

Taplands (Highland Weald, etc): Obviously in terms of power these don't hold much of a candle to the Shocklands. Sometimes they're worth playing in addition, though, or with Snow cards (which we don't use). However, here, these also don't satisfy our Green requirements. We're not going to be using Tresserhorn Sinks, because Blood Crypt is strictly superior in our deck, and we won't need a full complement of those.

Storage Lands (Fungal Reaches, etc): The mana storage is unnecessary here, and the color-fixing too slow for our various requirements. Avoid.

Gemstone Mine: A definite option, considering by the time it will most often run out we won't need one extra land that much anyway. It's rarely prudent to go too heavily on these - drawing multiples can be disastrous - but we may want to include 1 or 2.

Pillar of the Paruns: Not an option, as we're not running nearly enough multicolored cards.

Terramorphic Expanse: As with above, the enforced come-into-played-tapped ability is especially painful here, and the card doesn't offer anything especially attractive to make up for it. We'll probably avoid.

So, we have fairly heavy red and green requirements for land, but we can get away with playing few black lands.

Since we already know we are heavy on the Red and Green, we might as well include a full complement of the powerful multi-lands.

What about bouncelands? We can play the red-black one, Rakdos Carnarium, fairly painlessly, since the drawback won't affect our green requirement. The question is how much black mana we can afford to play. We have 13 already. Let's try 2 Rakdos Canarium and see how it goes.

One Gemstone Mine should be fairly painless. Let's put it in for now.

How do we stand before adding basic land? 16 black sources, 19 red sources, and 10 green sources, with 11 slots to go. Black, we're about where we want to be, and if we add more it will probably be via non-Basic land (since we still have plenty of good options left there). Red, we wanted 20+, and we have 19 already. Green, we wanted 15-20, and we have 10. Since it seems like fulfilling the green requirement is a bit more important (the issue of the 1-mana accelerators will come up much more often than the Akroma issue), I'll err a bit on that side, and go with 9 Forests and 2 Mountains.

So, here's what my first pass at the deck with land looks like: 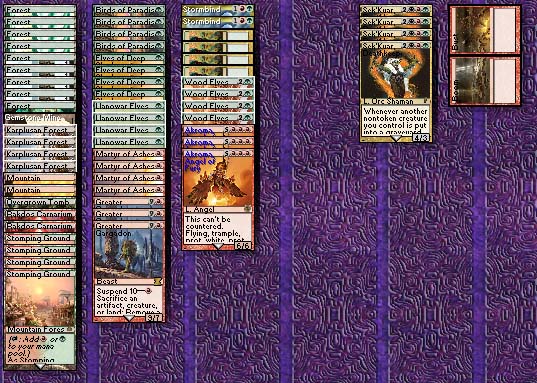 Let's look over our build as it stands:

For now, I just replace a Forest with Pendelhaven.

This step takes time. You're now ready to do actual playtesting, during which you should be considering your mana.

With this build, here is what I would be considering specifically:

In addition, always mind general areas for improvement (such as, are any certain spells stuck in my hand on a regular basis?).

The playtesting stage is prolonged and important. This is what will inform more difficult decisions (such as those noted above), and will make the difference between a good and great mana base.

That's it for our (first) series on the mana base. Join my special guest next week, and take an in-depth look at his signature decktype…