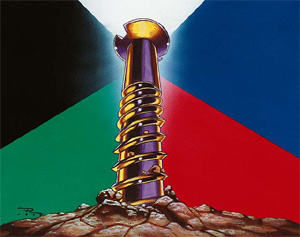 , and welcome to Magic Academy! This week we'll be looking at how best to handle a frustrating situation familiar to any Magic player—mana screw. It's an important aspect of the game, but it sure can be annoying, can't it fellas?

Mana screw takes three main forms: proportional lack of mana (mana screw), proportional flood of mana (mana flood), and absence of a main color (color screw). To some degree mana screw can be avoided by making good mulligan decisions, and by building your deck with mana considerations in mind. But everyone runs into mana trouble sooner or later. The question is how to manage as best as possible.

Many times, no matter if you play perfectly, you'll still lose in these positions. You may never draw into the right lands or spells, or even if you do, you might not be able to overcome the initial disadvantage. Still, this means that tight play is especially important in cases of mana screw. The games that are won here are often very close.

Despite having a smaller margin for error, being mana screwed typically means having fewer options. You may not be able to play many of your spells, or you may not have many spells to play. So the upside of being mana screwed is that at least there's a little less to think about.

You're mana screwed when you have drawn a prohibitively and considerably lower ratio of lands to spells than your decklist would suggest. (Or if enough of these mana sources are destroyed so as to put you in such a position.)

With more draw steps, you have more chances to draw lands. With more lands, you'll be able to play your spells. This motivates the mana screwed player to stall the game as much as possible. For example, to trade off creatures rather than to get into a racing situation.

Example: Your opponent attacks with Grizzly Bears. You block with Dusk Imp.

On the other hand, sometimes an early mana screw can cripple your late game chances, even if you would draw land. In these cases, it may be important to work to end the game before your opponent can make the most of the expensive and powerful spells that they're able to play.

Example: Your opponent attacks with Grizzly Bears. You take the damage, untap, attack with Dusk Imp, and play another Dusk Imp.

So, the first step to managing a lack of mana is to:

If you have a "bomb" you're just a few land short of playing (Wrath of God), it may be worth taking lengths, such as chump blocking, to ensure you survive despite any trick. Here, you want to stall more than you want to stabilize.

If you have the potential to race your opponent, and it looks like you would be in a weak position even if you draw a couple lands, then it might be worth trying to end the game early.

Most times, however, you will not have these alternatives as options, and your best bet will be to maximize the cards you can play by taking calculated risks to further your board position, and by using your life total as a resource to help you stabilize.

Example: You're stuck on three lands with two Serpent Warriors in play. Your opponent attacks with a Phyrexian Hulk. You'll need at least a few turns to be able to play any more spells, so you might as well block sooner than later; you gang block and hope he doesn't have a trick.

Example: Your opponent attacks with an Elvish Warrior and a Viashino Warrior. You have two Grizzly Bears in play and gang-block the Elvish Warrior.

Example: You play an unkicked Faerie Squadron so that you can gang-block one of your opponent's Grizzly Bears with your Lumengrid Warden, and then have the Warden free to block his other Grizzly Bear for subsequent turns.

Mana screw is more specific than it may seem. Your general goal is to stall and stabilize so that you have time to draw into mana, but this can motivate different plays depending on the board, on the specific cards you can play, and on the power level of the cards you're waiting to play.

Mana Flood (too much mana) 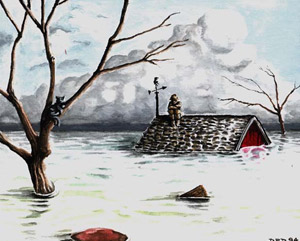 You're mana flooded when you have drawn a problematically and considerably higher ratio of lands (or mana spells) to spells than your decklist would suggest.

Like mana screw, the ways to get mana flooded are either to mulligan/not mulligan into a poor situation or to draw into a glut of land over a long game. With more draw steps, you have more chances to draw spells. Here, again, you're looking to stabilize the game (perhaps at the cost of life points or of increased risk) in order to have more draw steps.

Example: Your opponent attacks with Lightning Elemental. You don't block with Archivist. If you had a full hand, you might, but as is, you need a way to draw cards and utilize your mana.

Example: You're at 14. Your opponent attacks with Force of Nature and Phyrexian Hulk. You have a Sea Serpent and two Hill Giants in play. Rather than gang-blocking the Force of Nature with everything, taking less short-term damage and playing around a small pump spell, you gang-block the Hulk with the two Giants now, and then the Force with the surviving Giant and the Sea Serpent on the next attack.

Many steps are taken in deck construction to help against both mana screw and mana flood. For mana screw, players play a disproportionately high ratio of lands to spells, considering mana cost. Even if the average mana cost of a spell in my deck is 2, I might plan to have three lands by turn three, both so that I can play any spells that might cost more than 2, and just as a statistical buffer. To compensate for this, players sometimes include spells that can be easily maximized even in a mana flood scenario. 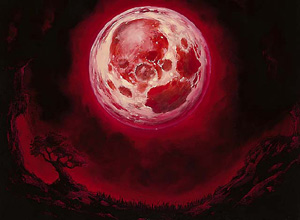 You're color screwed when you have drawn a prohibitively and considerably lower ratio of colored lands to the same color of spells than your decklist would suggest (or if enough of these mana-sources are destroyed so as to put you in such a position).

Being color screwed is similar to being mana screwed, but with a few significant differences.

What this means is that being color screwed is a less severe position than being mana screwed (though drawing out of it might be less likely). You can operate with less desperation.

Many tenets of managing mana screw are still applicable to color screw. If drawing an appropriate colored land will get you out of the situation, it's wise to try to stall and stabilize the board. If it's too late, or if you don't need it, race.

There are dozens of different ways to get unlucky in any given game of Magic. Ultimately, how well you do in general depends on how well you manage these set backs.
That's my spiel for the day. Now go on out there, get mana screwed, and win anyway.