and welcome to Magic Academy! This week we will again be looking at the metagame. This time, we'll look at the practical conclusions that stem from an assessment of the metagame.

So far we've approached the decktypes—control, aggro, and combo—cleanly, and with equal amounts of attention. This is of course not how decks appear in tournaments. Hybrids exist (aggro-control, control-combo), and decktypes appear disproportionately. As well, specific decks demand specific attention. You will want to tailor your deck to be good against the exact field, rather than just against the three basic decktypes.

So, it is important to have a sense of the field, to be able to both choose a suitable deck, and to tweak it accordingly. Let's look at how this is done.

How to Get a Sense of the Metagame? 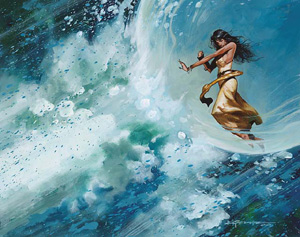 Especially in bigger tournaments, it is possible to make reasoned predictions about the field.

One way players get a sense of the field is by studying the results (and decklists) of previous tournaments in the format, and by staying current with online articles and forum posts. These can provide a gauntlet of test decks, and can give an idea of proportion.

Sometimes there are no previous tournaments in the format. It's possible to make logical predictions about the metagame based on the card pool available. Certain decks make natural sense (for example, Teferi, Mage of Zhalfir, Mystical Teachings, and Damnation–based control decks in Block Constructed...). You can angle yourself against these.

Another thing to consider is the particular skew of any given event. If you're playing at a local store where you usually see a lot of aggro players, adjust for that. If you're playing at the Pro Tour, don't expect players to shy away from control. It's also important to sense trends. Is there a reason that a deck might be significantly more popular this time than last time?

Once you know the general decks that are around, and have a general sense of how popular they are, you must apply this information.

I sometimes I use a chart as a starting point to guide my thoughts. I list each deck I foresee in the metagame and its estimated win percentage against every other deck. Doing this may require a bit of research or playtesting.

These results might influence my ensuing progress one way or another (encouraging Goblins and discouraging Blue-Green).

A few points to remember:

Approaches to the Metagame

Exploit it: One question is always if, in the words of Randy Buehler, a rock-paper-scissors metagame can be answered by a grenade—that is, if there is a deck available that happens to dominate an entire metagame.

Sometimes choosing this deck may represent a risky move, and will defy the logic of avoiding bad matchups against decktypes. Many players, like Nicolas Labarre with Merfolk in Rome, and Tiago Chan with Owl in Honolulu, have taken decks with dominating matchups against control and terrible matchups against aggro to terrific finishes in control-swamped environments.

Other times, it may just be an easy opportunity, waiting to be capitalized upon. Do the most popular decks in a format have many similar weaknesses? Or are they able to be answered by cards that work well together? Or is there just a powerful deck that no one has paid much attention to? These are suggestions that a metagame might be able to be "broken"...

The rewards of exploiting a metagame are great... but it is easier said than done.

Tweak your deck against it: Whether you adopt a deck you thing is good metagame choice in itself, or playing a deck you are familiar with and think is good in the abstract, you will have to balance it against the field. That is, let its natural strengths cover as much ground as they can, and then plug as many holes as possible.

We looked at some of the general approaches to combating aggro, combo, and contro over the last three weeks. But how exactly to do this depends on the decks in the format and the cards available for you to use.

Next week we'll look at the game play article I mentioned last week. :-)