Hello and welcome to Magic Academy! Today we will consider the act of playing the game itself.

Magic is a broad and complex game. In order to make it as manageable as possible for yourself, it's important to focus and organize your approach. 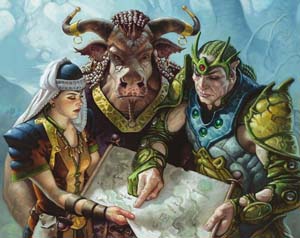 Break it down: You open your seven-card hand and you're off to the races. The first turn is usually pretty easy: you play a land, maybe something small, and pass the turn. From there it snowballs; each of the next few turns becomes progressively more complicated until you're knee-deep in the situation of the game. Because of the disarming start-up, it's easy to become swept into the tide of a game.

Instead, I recommend you approach the game turn-by-turn. Playing an entire game perfectly is a very ambitious goal. Playing a turn perfectly is a much more reasonable puzzle. Of course you must always consider the game as a whole, and your long-term strategies, but use your turn as the unit to re-evaluate these things.
Some considerations:

This will also help with analysis. Looking back at a disaster game, where exactly did it go wrong? You will be able to pinpoint poor decisions and faulty reasoning.

It will also help manage complex late turns, since you will have a cleaner mental segue into them. 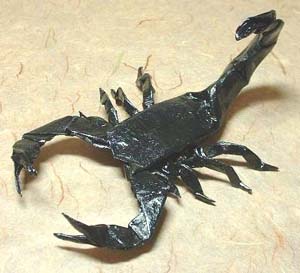 Unless you are this good, you can find a better token than a gum wrapper.

Keep it clean: The physical presentation of the board has a lot to do with tight play. Stay organized. Keeping your cards neatly set and fully tapped when they're used, as well as keeping clean life totals and using proper counters (ones that can represent being tapped and that can't be confused for morphed creatures), make it easier to visually assess the board state. A sloppy board is easy to mismanage.

Example: You forget that the gum wrapper is representing an Elephant token and fail to make a crucial block.

Stay in the game: Make a mistake? Don't beat yourself up about it now. There are plenty more to avoid on the horizon!

Bad luck? Forget about it for now and try to win the game!

Great draw and an opponent on the ropes? Finish them off; what if they have a sequence of cards to potentially escape?

Poor draw and getting crushed? At least give yourself a chance, even if it must involve your opponent having mostly land in hand, or drawing the exact right card! Sometimes it will pay off.

Play according to purpose: What is the purpose of a particular match? If it's a tournament game, then of course you're aiming to win. This motivates meticulous play, with considerations made to time limit (that is, not taking too long).

If your goal is to learn a matchup inside out, play meticulously and disregard time. Take as long as you need. Allow or disallow take-backs as necessary.

If your goal is to get a general sense of a matchup, play quickly. Allow take-backs to promote fast play with less room for accidental game-defining errors. Your goal here is to grasp the general flow of a matchup with as much of a sample as possible.

Example: You want to see how a new deck holds up in general against a stock burn deck. Instead of agonizing over every decision, as you would in a tournament, you hurry through ten games. Winning only one, it's clear your deck needs more work here, and also probably the specific areas that can be improved.

Analyze your games: In order to improve, it's important to analyze your games (especially ones you've lost). It is a considerable accomplishment to play a normal game perfectly, so there's usually plenty of room for improvement.

Walk through the game in your head. What were the difficult decisions? What was the turning point? Decide what your mistakes were. The goal here is not to avoid making the same specific mistakes again (exact situations may not repeat themselves), but to correct thought processes that are more generally applicable. Not just what was the mistake but why did I make it.

In-game, with the clock ticking, sometimes details can be overwhelming. Takes notes as necessary to be able to reapproach a situation later, or to get help with it.

If you get blown out of the water with a sealed deck, ask another, preferably more experienced, player for their take on it.

In short, it is important to always be actively trying to improve your game.

Example: You lose a close Sealed Deck match. Afterwards, you realize that the Archivist that gave you such a headache could have been nipped with the Shock you used on a Grizzly Bears to get a Viashino Warrior through the turn before. Perhaps you should modify your game to use removal more sparingly?

Practice the format: It's important to have logged plenty of hours in whatever format you're playing. This will allow you to become familiar with regular plays, and to pick up on important cues. If your opponent makes an odd attack, among other potentially volatile situations, you should be able to mentally provide yourself with a checklist of potential cards they might have.

Example: In a Time Spiral Block Limited game, your opponent attacks you with four creatures, one of which is the 0-powered Utopia Mycon, with three green mana open. Because you know the format well enough, you know that a likely trick for him to have here is Strength in Numbers.

Know your deck: Before you start a game, make sure you have a thorough knowledge of the cards in your own deck. In Constructed, this will usually come automatically from tweaking and tuning a deck beforehand. In any case, as a rule, you should be able to list your deck from memory (for tournaments, at least).

In Limited, this may involve studying your deck for a few minutes before sitting down to play. Knowing your deck will allow you to calculate the exact amount of useful draws you have in your deck depending on your reaction to a given situation. It might also inform specific plays (for example, the particular Rebels you could search out if you were to leave mana up with an Amrou Scouts.). Knowing your deck is also important to inform your possible long term plans given the current board situation.

Example: At Pro Tour-Nice '02, playing for Top 8, Jeff Fung had to decide on two plays based on which one gave him the most outs. After a quick evaluation, he thought each play only gave him one potential draw to win the game. In fact, the play he ended up not making would give him one additional winning draw. And he did draw this card. Ouch!

Be mindful of hidden information: In Magic and poker alike hidden information plays a key role. In poker it is a more central aspect. In Magic, the importance of hidden information is sometimes overshadowed by boards that are complicated and demanding all by themselves. Because of this, players can be less guarded about the cards they're hiding in their hand. If you make an effort to watch more closely, you might be able to intuit a player's thought pattern and be able to make an educated guess about potential cards in their hand. You should also attempt to cloak your own behavior as much as possible to prevent the reverse. Hidden information is difficult to manage but can ultimately be very valuable if picked up on.

Example: Your opponent draws his card for the turn, and instantly begins to scan his graveyard. Beware a recursion effect.

Evaluate the climate of a game: Certain plays are generally or usually profitable, but other plays may be correct given the particular way a game is playing out. Don't entrench yourself too much in habit, and allow room to spot unconventional approaches.

Example: You generally play Cabal Therapy on turn one. However, your opponent plays a land that suggests a deck you don't recognize. You decide to wait for more information before playing the Therapy.
That's it for this week! Join me next week when we try something a little different…
Jeff