Posted in Magic Academy on September 2, 2006

Magic Academy is a column designed to help newer players get up to speed by teaching them more about the game and showing the resources available on the web for learning more. The column is written in linear fashion, like a book, so each lesson builds on material learned in previous articles. So, if you're new to the column, you can either start at the beginning or just check the articles so far to see where you'd like to begin. To see the column's table of contents or learn more, just go to the Magic Academy Welcome Page.

This column is written for players that can at least muddle their way through a game of Magic. If you're completely new to the game and don't know how to play at all, we recommend starting with playmagic.com and then returning to Magic Academy. Once you know the basics of getting through a game we'll take it from there!

Your opponent has a pair of vanilla 2/2s on the board. You have one Hill Giant. Is this a good attack?

Nossir, this is a bad attack. If you swing with your Hill Giant, you trade him for one measly 2/2 and leave your opponent with the only creature on the board. However, if you leave him back on defense, your opponent doesn't get to attack unless he wants to let you pick off his 2/2s one at a time.

Your opponent has a pair of vanilla 2/2s on the board. You have two Hill Giants. Are there any good attacks to be made here? What other factors might change that?

In this case, you are definitely attacking unless you have a very good reason not to (like you know for a fact your opponent has one or multiple Giant Growths in hand and are waiting for a removal spell to use on his creature in response). The reason for attacking here is that the best your opponent can do is trade a 2/2 for your 3/3, but in the meantime you get through three points of damage and you still have the biggest creature on the board. This is effective aggression, which is otherwise known as a good thing.

Going back to our original blocking scenario from two weeks ago, Opie has decided to attack with all of his creatures this time, not even choosing to leave the Llanowar Elves back. What is the highest life total Ben can be at for this to still be a good attack? (Neither player has any cards in hand. Opie is still at 18 life.) 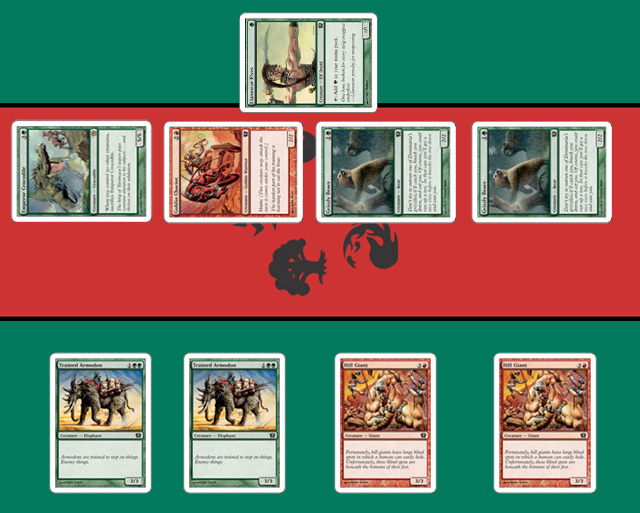 The correct answer here is 1. This attack is completely miserable for Opie, since he will be sacrificing his board position and nearly all his guys in a frantic effort to get through one or two attackers. With no cards in hand, Opie can't even bluff a trick, so he better be able to kill Ben with this attack or he's throwing away his chance at winning the game. This is a good illustration of where being too aggressive can just lose you the game. If Opie just keeps his creatures back and makes good blocks, he still has a good chance of winning this game. However, by attacking with undersized creatures and no tricks in hand, he cedes all of the advantage to Ben, and should expect to get wrecked for it.

Putting It Into Practice

If you read last week's article, you should have a good idea of the guidelines and thought processes you should work through before each attack. This week I'm going to bombard you with a barrage of real world examples culled from some recent 9th Edition drafts I participated in. (Don't worry if you aren't familiar with drafting, we will cover that in the near future.) Keep in mind when assessing these situations that you want to be aggressive, but not too aggressive. Just like in previous weeks, we'll start simple and then slowly make the scenarios more complex. 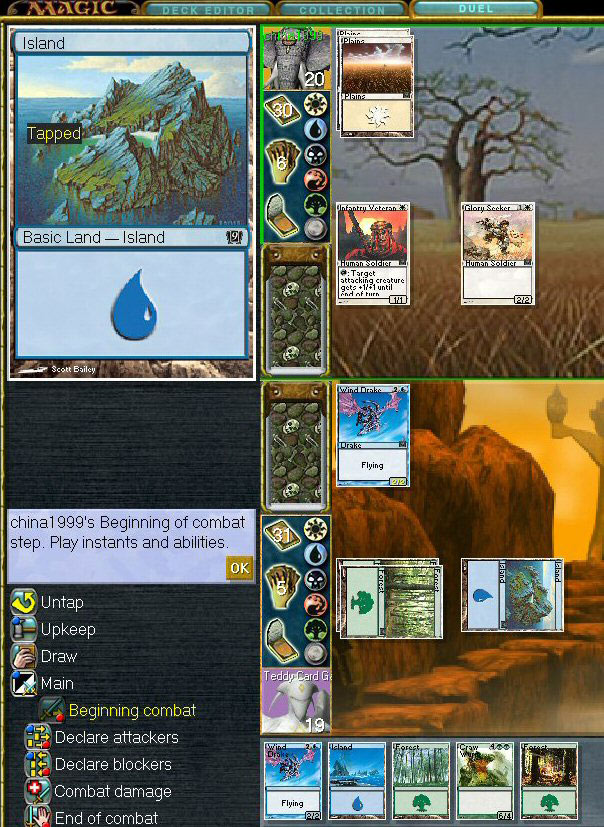 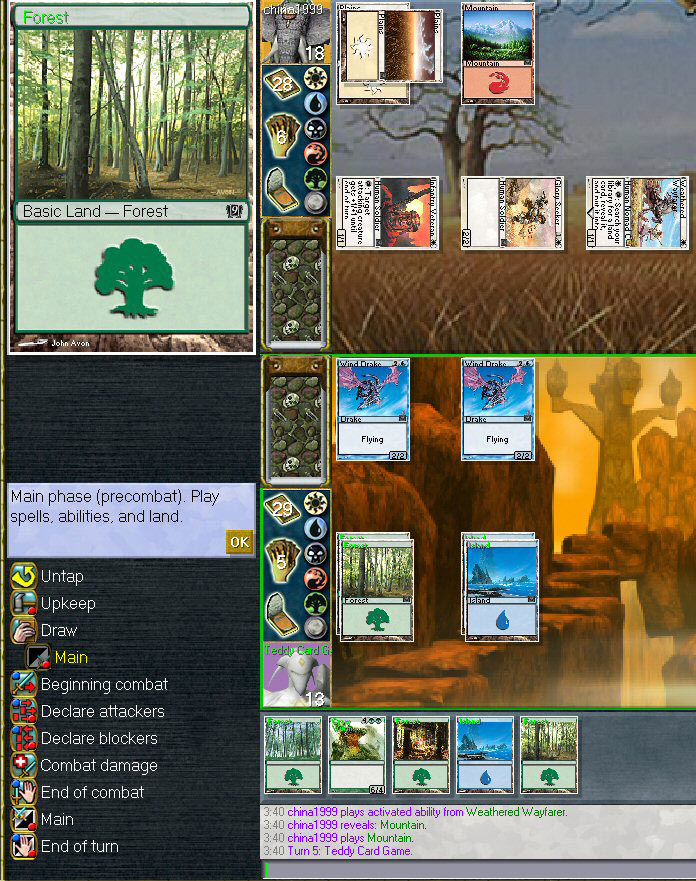 This time it's my attack on turn 5. As you can see, China has added a Weathered Wayfarer to the board, while I've put a twin Wind Drake into play. It's my attack - 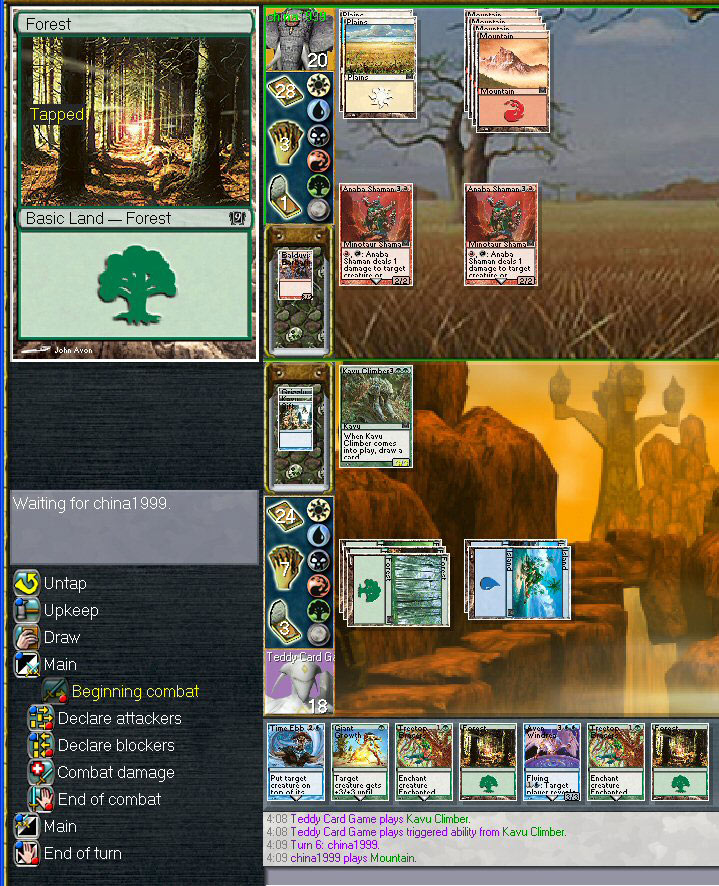 New game, same deck, same opponent. As you can see, this time my hand is stocked with gas. It's China1999's attack, with both of his Anaba Shamans ready to attack, and my Kavu Climber holding the fort. 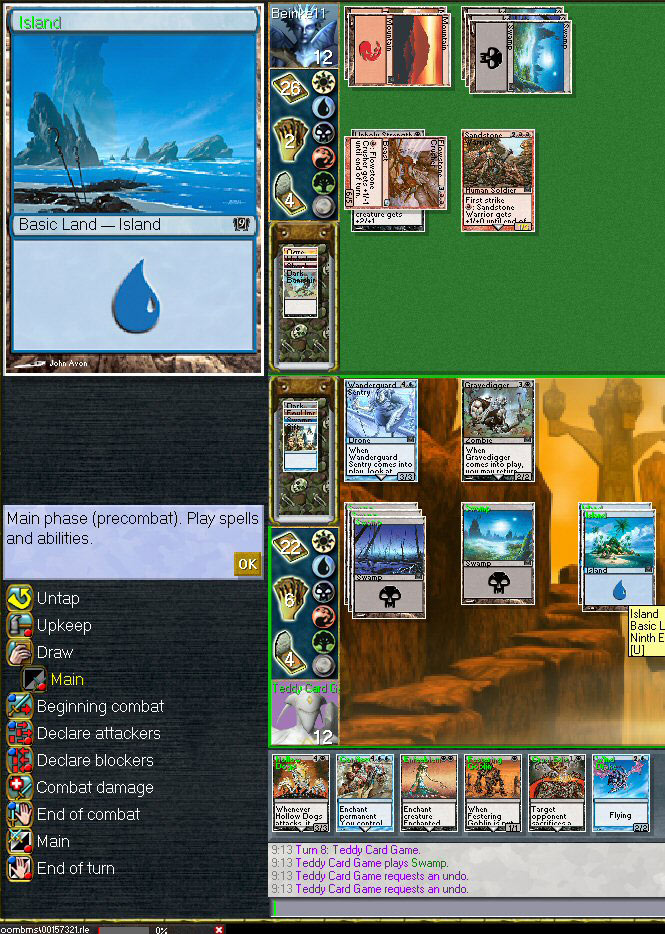 It's my turn, and this time I'm facing an aggressive Black/Red deck with my own very saucy Black/Blue number (which you can tell by looking at the cards I have in hand). My opponent, however, has gotten off to a hot start with Unholy Strength plus Flowstone Crusher, while my guys are considerably more scruffy (though to be fair, we're each at 12 life, so scruffy in this case is alright). It's my attack - looking at the life totals and what's on the board, 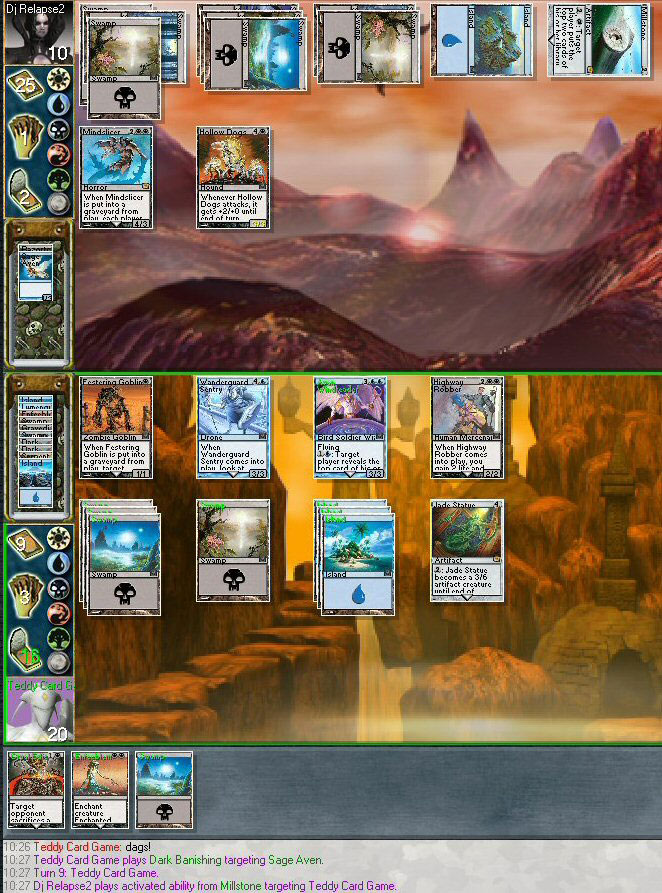 This last one is the most complicated of the bunch in terms of actions to be taken, though the decision of whether or not to attack is relatively obvious. In this match, I faced an opponent with the same colors as I had, but in game 2 he put out a second turn Millstone followed by a fourth turn Mindslicer. This put me in a position of needing to attack quickly before he decked me with the Millstone (which can be ugly when your decks are only 40 cards), but not at the expense of my entire hand. I finally built up an army (trying to empty my hand as much as possible), and then needed to figure out the right sequence of plays to make to maximize my hand and the damage I could do.

This will reduce DJ to 1, at which point not even Plague Wind will save him, because Jade Statue won't be a creature on his turn and therefore will not die. Note step two there by the way. Watch for chances to give your opponent the chance to make mistakes, especially when it's at no cost to you in the process. A lot of people seem to assume their opponents will play perfectly and that's just not the way it works out. Each time you give your opponent a chance to make a mistake, you give yourself a chance to pick up extra advantage!

I hope you enjoyed this in-depth look at attacking in real life situations. I find that many times what seems simple is far from it, and just setting up scenarios to talk through, or reviewing what occurred in previous games is very worthwhile and serves as an excellent teaching tool. At the very least, I hope these scenarios caused you to think through the guidelines we covered last week so that you are more comfortable with attacking and blocking than you were before we discussed these two topics.

Tune in next time when I try to make you hep to the jive.

Posted in Magic Academy on September 2, 2006