Tactical Protocol: Your Own Turn 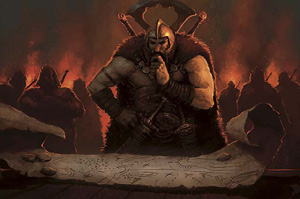 Hello, and welcome to Magic Academy! This week we're going to look at tactical aspects of timing: when to play spells (mostly instants) and effects, and why. This will begin a series of articles focusing on tactics and strategy.

Each turn has five distinct phases, some containing multiple steps. The significance of each phase and step differs depending on whether it is your turn or your opponent's. The structure of the turn can motivate instants and abilities to be played during specific phases. Being able to recognize these structural elements and knowing how best to act on them is highly relevant. Let's take a look.

When and why to initiate spells *

Untap Step: All of your tapped permanents untap. Nothing can be played during this step.

Upkeep step: The most significant tactical aspect of your upkeep step is that it is before your draw step. Generally, it's best to wait until your main phase to play spells, since by then you'll have the additional information of your draw. However, there are several types of effects that are likely to happen during your upkeep:

Draw step: It is unusual to have good reason to play spells during your own draw step.

The most significant tactical aspect of your first main phase is that it is before combat. Of course, this is one of the only two phases in which you can play sorcery-speed spells, but you will have a chance to play them after combat. In general, it's best to save your spells for the second main phase, so that your opponent has less information during combat. Your goal in your first main phase is to put yourself in the best position possible and your opponent in the worst position possible for the combat phase.

Beginning of Combat Step: This step is the last chance for your opponent to tap your creatures or otherwise prevent them from attacking. You declare your beginning of combat step before saying which creatures (if any) are going to attack. It's very rare to have a tactical reason to want to initiate a spell during your beginning of combat step. However, if your opponent is going to use spells or abilities to tap potential attackers, this is probably when they'll do it. Accordingly, the rare times that you play spells or abilities during this step, they will probably be as a sort of response to this: to untap tapped creatures.

Declare Attackers Step: You start your declare attackers step by deciding which creatures are going to attack and tapping them. Then, each player gets a chance to play spells and abilities. The most significant tactical aspect of your declare attackers step is that it is after your opponent's chance to tap your creatures to prevent them from attacking has expired, but before your opponent has blocked.

Declare Blockers Step: At the beginning of this step, the defending player declares blockers. Then, each player has the chance to play spells or abilities. The most significant tactical aspect of the declare blockers step is that it is that last step before combat damage is assigned. Also, your opponent is now committed to their blocks.

It's important to note that whether a card functions as pump or prevention (and the degree to which it does) is often situation specific. A Giant Growth shouldn't always be played before combat damage, or after combat damage; it depends on the situation.

Example: You block my Elvish Warrior with a Craw Wurm. I play Giant Growth. They trade. A Giant Growth after damage had been assigned would have done nothing.

Example: You block my Silklash Spider with an Enormous Baloth. After combat damage has been assigned, I save my spider with Giant Growth. If I played it before damage, the Baloth still wouldn't die, but my opponent still has a chance to play pump to kill the spider.

Example: You block my Craw Wurm with your Craw Wurm. If I play Giant Growth as pump, then I can kill your Craw Wurm even if you have some prevention. However, then I open myself to losing both cards to a Dark Banishing without even killing your Craw Wurm.

End of Combat Step: The most significant tactical aspect of the end of combat step (during your own turn) is that it takes place after damage has resolved, but while combat is still technically taking place. Occasionally circumstances will arise when it is important to use a card like Desert (targeting your own creature), or Crossbow Infantry during exactly this step, but they are rare.

4. Second Main: The most significant tactical aspect of your second main phase is that it is your last chance to play non-Instant spells. This makes it the default phase for playing Sorcery-speed spells.

Balancing considerations of information and resources within the structure of the turn is a deep process that is regularly relevant. This is something we'll come back to.

End of Turn Step: This is when triggered abilities that happen "at end of turn" are put on the stack. The most significant tactical aspect of your end of turn step is that it is your opponent's last chance to play instants and abilities before they untap; it is an important step for your opponent.

Cleanup: This is when damage is removed from creatures and "until end of turn" effects end. Nothing can be played during this step.

I have excluded some more complex and specific situations from the main article, but they are included below for anyone interested. ***

That's it for this week. Join me next time when we look at the tactical design of our opponent's turn!

* Note that I am describing protocol that is phase-specific and am not mentioning general responsive cues. For example, if you have a Giant Growth and an important creature, and you know your opponent has a Shock, you will want to wait until whenever they play their Shock, whether it is in your declare attackers step or end of turn.

** Note that though the actual last time for you to play instants before your opponent's untap step is during your own end step, this is often done during the second main phase. Similarly, general beginning of turn effects are usually done during upkeep, not the draw step, and general combat damage effects are done during the combat damage step and not during the end of combat step. This is for two reasons: First, as shorthand. Second, because it is possible to do other effects (i.e., in the second main phase, playing sorceries) after the instant is played.

*** 1. The at-end-of-turn clause that sometimes motivates spells and abilities to be played during the second main phase (Astral Slide, Anurid Brushhopper). 2. The fact that your upkeep is the first time during your turn after you untap that you have priority. This sometimes motivates split second spells, and priority-related abilities, to be played immediately (Krosan Grip vs. Isochron Scepter). 3. Sometimes it is important to play certain damage prevention spells, ones that target an opponent's creature and not the damage itself, (Boros Fury Shield) before combat damage is assigned. This is because if your opponent counters them by destroying their own creature, then at least their creature won't deal combat damage. There are more examples that are too marginal to bother listing, but do notice them... they come up!