Wax On, Wax Off

Ed. Note: While we had hoped to have the new writer begin this week, contract delays and other issues forced us to push it back a bit more. Next week we don't have new updates at the end of the week because of the Thanksgiving holiday, which seems like an awful time to debut the new writer, so we're instead going to relaunch under the new writer on Saturday, December 2. However, at this point I can finally let you know that we did get our first choice, and I'm very happy to announce that it will be Jeff Cunningham taking over the column when it restarts on December 2. Jeff is easily one of the most talented writers in the game, and I'm happy to have found something that's inspired him enough to commit to a weekly column. In fact, when he first agreed to it his next email back had something like forty-plus topic suggestions for the column to start with, and I think that enthusiasm will show in his work. So, next week we'll have one more rerun and then we're off and running. Thanks again for your patience while we get everything back up to full speed.

again and welcome back to the series that hopefully proves that reading is truly FUN-damental. I'm your host Ted Knutson, and I could spit cheesy sayings like that at you all day long… but I won't, and not because you begged me not to. No, the reason is simply that I don't like cheese. It's also because when last I left you we were in the middle of some important business - namely that of learning how to block, and block well.

Rather than peppering you with jacked up sayings both gouda and bad, today I'll be delving into practical blocking applications, and hopefully helping you simplify situations that can seem too complex. If everything goes according to plan, by the end of today's lesson I will have transformed you from a blocking novice into a combat cuisinart, slicing and dicing through your opponent's creatures like a hot knife through some other dairy product that is definitely not cheese. If you haven't read last week's article, I highly recommend you take a few moments to do so now, because I'll be referencing some of the rules discussed there without explaining them again in this article.

The Answer to Last Week's Conundrum

I ended last week's column with a puzzle but no answer, so I suppose it's only fair to fill in the answer before we progress to anything new. For those who don't remember what the scenario was, it looked like this: 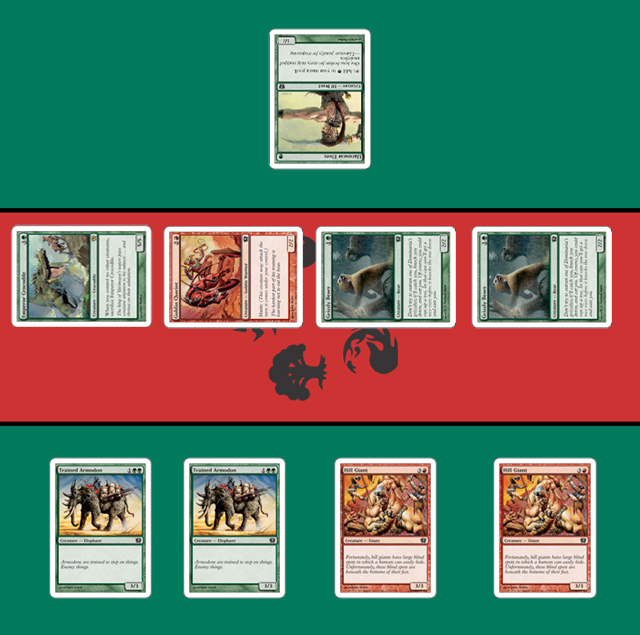 Opie, the top player, has 18 life, and you, the bottom player, have 10 life. Jumping right in, the first thing you want to do in this case is figure out if you have to block. Looking at how much damage you have coming at you (11) versus your life total (10), not blocking leads to death. Therefore, blocks are required.

Now that you know you will be blocking, you have to determine how. The correct answer in this case it to double-block the Crocodile and then block two of the 2/2s with your remaining creatures.

The reason for this is because it's the most efficient blocking plan in terms of making your opponent's creatures easier to deal with in future turns (which is another way of combining and expressing Rules 3, 4, and 5 from last week). Since your opponent has no cards in hand, you don't have to worry about any combat tricks that could kill your creatures while letting his live. In the end, you trade one measly Hill Giant for a 5/5 and two 2/2s, coming out of combat with less life, but clearly winning the skirmish. You could certainly choose to block in a different way for this scenario, but with no cards in hand and not knowing the contents of the decks this way is the best.

Those of you who chose to toss a 3/3 in front of the 5/5 by himself need to go back and review Rule #2. Chumping here is a) not necessary and b) does not help you win a race, and should therefore be avoided.

Ben is once again in a pitched battle with Opie for kitchen table supremacy. This time the board looks like the following:

Opie In the red zone and tapped are: 1 Grizzly Bears, 1 Trained Armodon 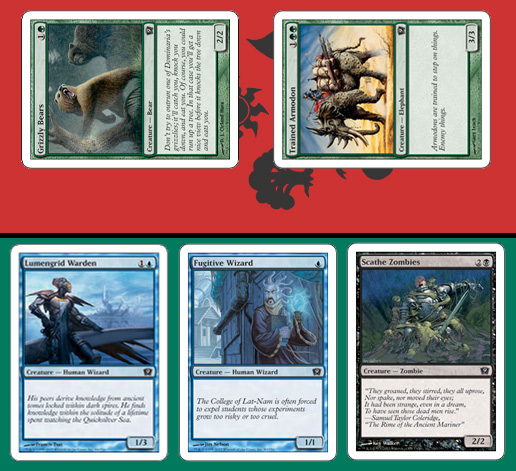 The life totals here are 20 for Opie and 13 for Ben. Since this is another basic scenario, I want you to pretend neither player has any cards in hand and just focus on the creatures presented. Again, the question is simple: ?

I'm going to step away from Ninth Edition cards for this scenario and make it a bit more complicated just to illustrate a point about threat analysis. This time Ben and Opie are battling it out in a Ravnica-Guildpact-Dissension draft. (Don't worry about it if you don't know what drafting is - I will be introducing the format and discussing it in detail in the near future.)

Opie had the upper hand for much of this game, but Ben has just cast his bomb rare, Niv-Mizzet, The Firemind (a “bomb” is a card that is considered to be very powerful). Opie has two cards in hand, and Ben has no idea what they are. He did see both Lightning Helix and Pyromatics from Opie last game though, so he knows that Opie has some good removal spells that double as targeted burn for players as well. Meanwhile, Ben only has Train of Thought in hand. Opie's life total is 16, while Ben's life is only 8. 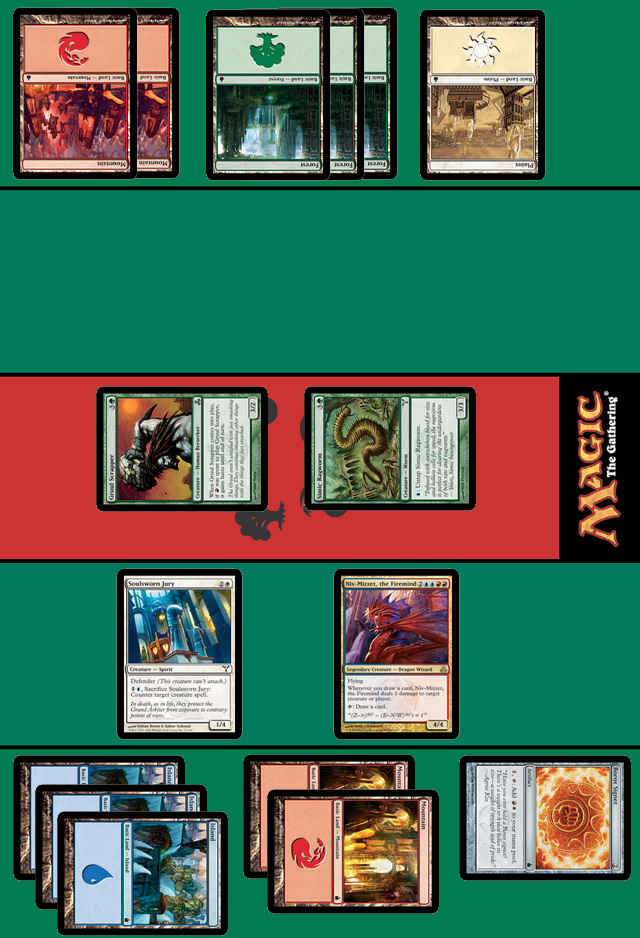 (Take a second to reread Niv-Mizzet and Train of Thought if you need to.) Knowing that Niv-Mizzet can just dominate games,

As you become more experienced with the game, one of the skills you will need to develop is knowing when to risk your best creatures, and when to keep them out of the line of fire so they can dominate on future turns. This is by no means an easy thing to learn, and even the best players don't always get it right, but it gets easier with practice.

Variations on a Theme

Alright, let's take the exact same scenario I introduced last week and change one single variable to see how that affects our thought process. All of the creatures on the board are identical, as are the life totals. The only difference is that this time, Opie has two cards in hand, plenty of untapped mana, and just like in real life, you don't know what those cards are, but your intuition tells you one of them might be a Giant Growth. 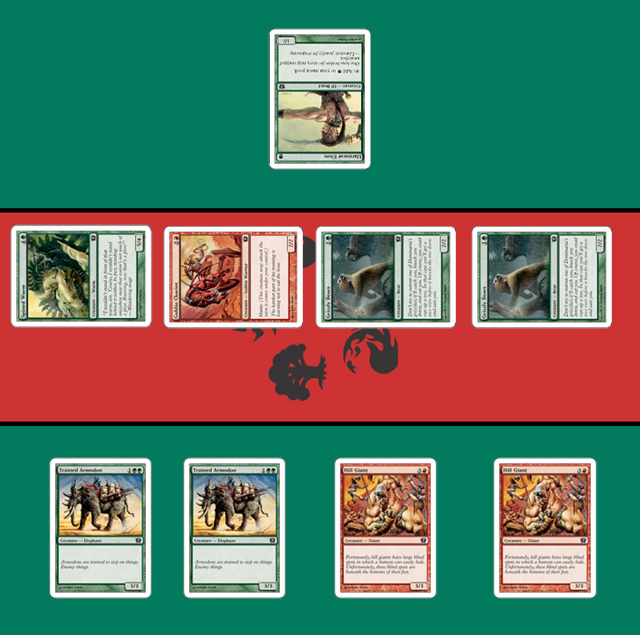 Now suppose you have the same situation as Variation A, except this time Opie has a Spined Wurm in place of Emperor Crocodile, and you have a Dark Banishing in hand and the untapped mana to cast it on the board. (Remember, your opponent now has mana available and also has two cards in hand, one of which you have a strong feeling might be a Giant Growth.)

These scenarios have gone from simple to somewhat complex, but the point of all of this is to show that blocking can be tricky when there are a lot of variables to take into account. Due to the beginner nature of the column, we occasionally need to create some unrealistic scenarios, but the point isn't so much to toss you into a real game and make you figure out the right action - just by playing Magic, you will get a lot of that experience. Instead, the point is to give you the critical thinking skills to work through the limitless situations you will encounter when playing Magic and figure out how to best deal with them on your own when they arise.

I hope you've enjoyed this walk through the kinds of decisions that go into making good blocking choices. Join us next time when we flip the table around and discuss the art of effective beatdown.