If you can't tell, I like to attack. I honestly think an efficient, quick, and smart assault is the best plan for winning a game of Magic. For a number of reasons, I think it's almost always best to figure out the best aggro deck for a format, tune it to the expected metagame, and run with it. Admittedly, my opinion is biased (or perhaps unbiased) by the fact that I've never played in a horrible combo environment where decks that win quickly without attacking ate the norm. But I honestly don't think we'll see another environment like that again, so we can just agree to ignore my lack of experience. Long story short, people tend to overestimate their ability to beat a well-built aggro deck, consequently cheating on anti-aggro cards to fit more Persecutes into their decks.

No beating around the bush then, you want to know how to build a well-built aggro deck, right? Build it well, I say. (Jokes, friends. Jokes.) I touched on it very briefly earlier. An aggro deck has to be efficient, quick, and smart.

Quickness is important because both combo and control decks acquiesce to your early game, generously donating life points while they "set up." To take advantage, it's vital that an aggro deck starts making plays on turn one. I already told you how much I admire a red deck's ability to Shock the face turn one. Ideally though, you want to be playing creatures on turns one and two. I'll go through the math when I talk about efficiency, but here's a simple equation concerning quickness: A one-drop on the play will get in three attacks before Wrath of God clears the board. A two-drop will get in two hits. A three-drop strikes once. Four-drops don't technically ever do damage (unless they have haste). Anything more expensive than a four-drop actually draws cards for your opponent.

In order to play a turn-one creature almost every game, an aggro deck has to actually play a lot of one-drops. The same goes for two-drops. If you look at Boros Deck Wins (red-white), its precursor Red Deck Wins (mono-red), or the modern Zoo decks (usually white-red-green), you'll find that almost every single creature is either a one- or two-drop. I should also note that the quality of the creature isn't especially important, not nearly as important as its quickness. Ironclaw Orcs saw play in the original Sligh decks.

Take a look at this Boros deck from last year's World Championships, which was pretty representative:

Early on players learn about mana efficiency, about how much you should pay for what kind of effect, how lame it is to pay more, how awesome it is to pay less, and so on and so forth, et cetera, et cetera. And lessons in mana efficiency are often tied to lessons about curve. It's important to spend all your mana every turn doing things that are priced appropriately.

Generally, aggro decks don't have a curve, just a block of cards that cost one or two mana, and a few outliers at three and four mana. The way an aggro deck approaches the problem of spending all of its mana every turn is to not have a lot of mana to spend.

Because aggro decks don't often need more than three mana a turn, the decks can afford to play less land than a control deck. Aggro decks can cheat even further because most of their core game plan operates off of two mana. See, when a control deck needs to hit Wrath of God to stay alive, it needs to make four straight land drops. An aggro deck that needs to play the game-winning Char before the control deck reaches eight mana (enough to play Keiga, the Tide Star or a similarly huge creature with Mana Leak back-up) has a rather large window of time to find that third land.

Mana efficiency is a pretty generic concept, essential to an aggro deck but also fairly basic. The efficiency an aggro deck is really concerned about is damage efficiency. Damage efficiency is the amount of damage a card can generally be expected to deal. Unless there's a Furnace of Rath around, a Volcanic Hammer will deal 3 damage. A Char can be counted on for 6 damage (I know, only 4 of it counts, but Char is pretty awesome and I just wanted you to understand that). A card like Demonfire is a little trickier because X can be anything. Damage efficiency is about expected value though, and land-light aggro decks can only reasonably anticipate 4 or 5 damage from an X-spell. Also, note that a spell that costs 10 mana and does 20 damage should be expected to do 0 in a normal game. Make sure not to take a situational burn spell at printed value when evaluating its efficiency. Your opponent won't always be at 10 life (Hidetsugu's Second Rite) or have a grip full of expensive spells (Ignite Memories).

Evaluating a creature's damage efficiency is a more difficult task. That's because creatures aren't guaranteed to deal damage at all, no matter how much mana you pay for them, and most people understand the need to disrupt creature-based damage. That said, creatures, as quick and repeatable damage dealers, can be extremely damage-efficient. Therefore, the ability to understand how much damage to expect from your creatures is critical when building an aggro deck and when playing it.

Using the quickness equation from above, it's easy to see that we can expect 3 damage from a one-power one-drop before Wrath of God does its thing. A Savannah Lions is good for 6 damage. A Grizzly Bear delivers 4 to the dome. Watchwolf is also good for 6. Your average elephant (say, Trained Armadon) rumbles in for 3. Anything on curve on turns one through three is at least as good as Volcanic Hammer, and better when the opponent falters. Like I said earlier, that Hammer will never be better than it is, no matter how many land drops your foe misses.

This red-green aggro deck, also from Worlds, uses Llanowar Elves to get its three- and four-drops attacking sooner than normal, increasing the amount of damage they can deal.

3 Call of the Herd

That said, creatures that are played off-curve, after an opponent has put himself in position to deal with creatures, are fairly inefficient at dealing damage. It's extremely important for an aggro deck to be able to finish the game quickly when its creatures have been invalidated.

I've mostly talked about building aggro decks in this column, but because I touched on it, I'd like to provide a quick example on damage efficiency affecting play decisions. Suppose I have a 2/2 and my opponent has an untapped 3/3. What do I do with the Volcanic Hammer in my hand? It really depends how much more damage I expect from my 2/2. If I'm spending 3 damage to buy 2, it's not really a good deal. If I reasonably expect (or need) two successful attacks from that creature, then I should definitely use the Hammer to clear the way.

There's a final idea I've kind of talked around that is really important to the plan of a good aggro deck. They thrive on redundancy. They win close games because they do the same thing every game, no matter what cards are drawn, while the opponent usually needs a specific sequence of cards to keep himself alive. Aggro decks don't usually play cards that clog up the hand if they show up too early. Cards like Keiga, Compulsive Research, and Wildfire (all cards that have their roles in the fight to survive) sit in the control player's hand and mock him. Sometimes a control player taps out to do nothing – I mean to play Compulsive Research on turn three – and both players get to share a healthy, Three Stooges, violence-is-funny laugh. 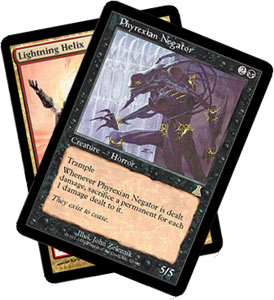 Not as different as they look.Redundancy in an aggro deck isn't just the inclusion of 12 one-drops. It's the idea that almost all of the cards do the same thing – they deal damage. A turn one Shock deals just as much damage as a Tundra Wolf that attacks twice. The cards in an aggro deck don't serve different functions the same way that card drawing spells and kill cards do in a combo or control deck. Sure, a Lightning Helix and a Phyrexian Negator have almost nothing in common superficially. And they do present different challenges to the punching bag – I mean, control player – who's trying to fight them off. But the end result of any of the cards in an aggro deck is almost always the same. Think about it this way: If you took almost any card out of an aggro deck and built something that had 38 copies of that card and the appropriate land, it would win a game if it wasn't disrupted. The average control or combo deck has very few cards (if any, in combo's case) that could make so much as a dent on its own. And even the cards that can win games (like Keiga or Spiritmonger or whatever) probably can't keep up with their aggro counterparts.

Sure, there are exceptions, but to be honest they usually get cut from the better aggro decks. If you look at this Extended season, Armadillo Cloak saw heavy play in the Boros decks while Boros was a warping presence in the metagame. When players stopped having to worry about the mirror match (playing other Boros decks), Cloak started to be replaced by cards that deal sizeable chunks of damage without any help.

I wanted to collect all my bulleted points down here, partly to make sure I covered all the essentials, and partly so you'd have an easy to read summary. Here, then, are my basic suggestions for a well-built aggro deck:

I really hope this column helps you understand not just the more technical features of an aggro deck, but what kind of mindset the aggro player has to be in when he's evaluating cards, building decks, and making play decisions. I know I really didn't talk much about aggro game play, but a lot of the same ideas apply.

The real point of it all for the aggro player is: How do I deal the most damage? Remember that.