and welcome to Magic Academy!
Today we’ll be looking at the basics of tournament play.

Tournament play is an exciting aspect of Magic. If you’re used to playing only with friends, tournaments are a chance to play against new opponents and to become exposed to fresh ideas. A formal environment is also a great place to improve your game. People show up on time, come prepared, abide by a firm set of rules, play for a while, and all strive seriously for a defined goal. Everyone tries. In this sort of dynamic, even in defeat, there’s a lot to reflect on afterwards, and these reflections provide guidance. Besides all this, most people just find competitive play really fun. 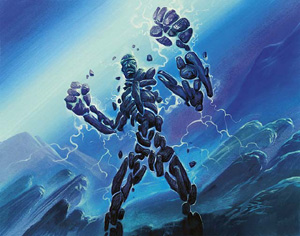 Tournaments are played using either a modified Swiss structure or a single-elimination structure. In both cases, rounds are 50-70 minutes long and are played best two games out of three. The Swiss structure awards 3 points for a win, 0 points for a loss, and 1 point for a draw. In the first round, players are paired randomly. For every subsequent round players are paired against those with the same or similar match records (everyone with three wins and no losses plays someone else with three wins and no losses, etc). Single elimination is simpler. Everyone is paired randomly (sometimes into brackets), and anyone who loses a round is eliminated while everyone else advances.

Though prizes, and the spots to which they extend, vary, Swiss tournaments are usually played for a designated amount of rounds, proportional to the number of players in attendance, before cutting to a Top 8 – the eight players with the best individual records. From there, those eight players play three rounds of single elimination to determine final placement. 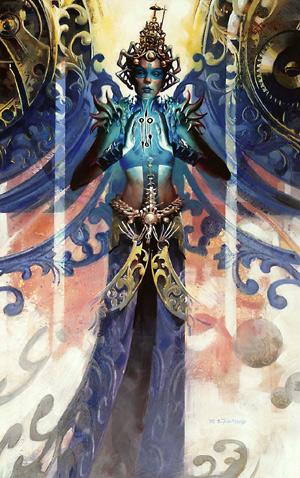 The amount of time a tournament takes can vary. For a long Swiss tournament (say, a Pro Tour Qualifier) with an expected 6-7 rounds, you can expect: 50 minutes (+ 10 for various holdups) x 6 Rounds + 60 minutes for things to get started, for a total of about 7 hours from the start time. You can also allow for an extra few hours in case you make Top 8, and another hour for deckbuilding in the case of a Sealed Deck tournament. For a single-elimination side tournament (say, an eight-person Booster Draft,) you’re looking at between about 1 hour and 3 hours.

Official Magic tournaments are “sanctioned.” Every player has a number (their DCI number) designated to them that they give along with their name at any tournament they enter. If it’s your first tournament, you will be assigned a new number. Try to hold on to it, but if you lose track of it, tournament staff can look it up for you at your next event. Players’ results are recorded from tournament to tournament and are used to generate global and local rankings (so you can see, say, who’s #1 in the World at a given time, or how you rank in your community, state, or country), and ratings (so you can see where you stand in relation to the default, 1600). Sometimes smaller local tournaments are not sanctioned, and thus do not affect ratings or rankings. This is not unusual. Calculating rankings and ratings is beyond the scope of this column, but suffice to say that the more matches you win, the higher your rankings and ratings go. Wins against players with higher ratings than yours count for more, and losses against those players count for less.

Tournaments can be intimidating at first. As I mentioned, they have certain rules (beyond the rules of Magic itself) that are long-ingrained in veterans but may be unfamiliar to new players. Let’s take a look.

Life Totals: The advocated method of tracking life totals is pen and paper. Additionally, sometimes players will make a note of the source when marking damage (e.g., 19-&gt;18 – Painland, or 14-&gt;8 – Attack), for easy reference in the case of a discrepancy (say, you have your life as 10 and your opponent has your life as 8). However, this is not necessary, and I don’t do it. Just try to be neat and clear, and refrain from using dice or spinners, as they offer no evidence whatsoever in the case of a discrepancy.

Both players should keep track of both players’ life totals.

Sleeves: Any specific scratch or wear on the back of a card can mark it. For tournament play, cards must either be unmarked (and assembling a completely unmarked deck can be a real challenge) or be in unmarked sleeves. A pack of sleeves usually costs about $5 and can be used a few times before needing to be replaced.

Decklists: For Limited tournaments (A Sealed Deck or Booster Draft), no preparation prior to the tournament is required. For Constructed tournaments, you must bring a minimum 60 card deck and 15 card sideboard (remember to make sure all the cards you use are legal in whatever format a given tournament uses, as we discussed two weeks ago).

For Constructed tournaments, once you arrive you will be given a deck registration sheet to fill out. This is to list all of the cards you are using in your deck, to ensure that nothing changes from the beginning of the tournament to the end.

In Limited tournaments (only the bigger ones, and usually only Sealed Deck), you will also be given a Deck Registration sheet. This one will have a list of all the cards in the applicable set and will require you to check the ones you open (in your 90 cards), and also check the ones you end up playing (in your 40 card deck) in another column. 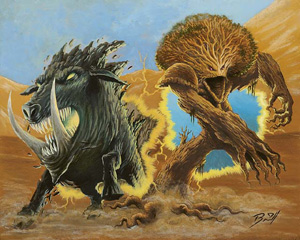 Pairings: Five minutes before a round starts, a judge will post the round’s pairings sheets and announce that they have been posted. The pairings sheets will direct every player to a given table number, where they will meet their opponent for the round.

Lateness is, again, penalized, so make sure you don’t stray too far after a round ends and another is about to start.

Rules & Judges: Magic has many rules, some of which are very complex. Additionally, these rules are sometimes difficult to apply.

As for knowing the rules, different tournaments require different levels of understanding. At local tournaments, prereleases, and Friday Night Magic, a rudimentary level of rules-knowledge is enough to play. For PTQs, and other higher-level tournaments, though, a more thorough understanding of the rules might be necessary.

As for applying the rules, every tournament will have at least one judge on hand to answer either general or specific rules questions. The judge also makes rulings in the case of discrepancies and gives out penalties if necessary. In larger tournaments, there will be a head judge. If you believe a ruling made by a judge to be wrong in a larger tournament, you may (and should) appeal the ruling to the head judge.

If you have any questions, are confused about something, or believe your opponent to be doing something not allowed by the rules, don’t hesitate to call a judge. 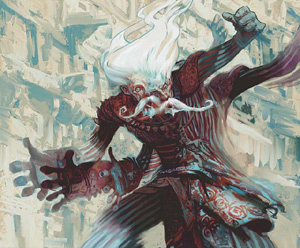 Speed of Play: A certain pace of play is expected at tournaments. It is difficult to define what exactly this pace is – some turns will of course be longer, and others faster – but it is usually described simply as “reasonable.” One may think things out to a degree, but should aim to play briskly in general. If you are playing too slowly, you will usually be given a few verbal prompts to pick up the pace before any formal warnings are given.

Additionally, intentionally playing slower than you normally would in order to gain a strategic advantage (most often, stalling until the round ends in order to get a 1-0 win or a draw), is not allowed and is heavily penalized.

Round’s End: If time (the round’s 50 minutes) runs out while a game is still underway, the game goes into extra turns. After the current turn, only five more turns will be played (Player B, Player A, Player B, Player A, Player B). After the last turn, if neither player has won, the game is declared a draw (regardless of life totals or game state).

A few other notes:
• If a game hasn’t yet started when the round ends, it won’t be played at all, not even for the five extra turns.

• If a game draws naturally (for instance, a player plays Hurricane for 3 with both players at 3 life), then the match continues as if that game had not occurred.

• In the case of single elimination, after the five extra turns, if a match would be drawn (i.e., both players have an equal amount of game wins), instead the player with the highest life total wins. If life totals are tied, or the third game hasn’t yet started, then play continues (or the third game starts) until one player’s life is higher, and then that player immediately wins.

Intentional Draws and Tie-Breakers: If both players consent, an intentional draw (1 point each) can be awarded, rather than a win (3 points) and a loss (0 points). Usually, this occurs if two players are friends and don’t want to knock each other out of contention (two losses rarely makes Top 8, but a loss and a draw often does), or if both players would be guaranteed a spot the Top 8 with only 1 more point. 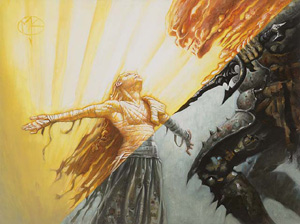 What happens if there is only one spot left in the Top 8, and two players with 17 points? A tiebreaker, very frequently relevant, is used: opponent win percentage.

This number accounts for how well your opponents have been doing over the tournament, the idea being that if you and another player have the same record, the one who fought through superior opposition to get there should be recognized for this.

A high tie-breaker can often mean the difference between being able to draw into the Top 8 or not. Deciding whether or not it is in your best interests to make an intentional draw considering your tie-breaks is an important, but advanced, aspect of tournament play.

All these little rules may seem overwhelming. However, in an actual tournament setting they are very intuitive and easy to get the hang of. Start small at local tournaments, Friday Night Magic, and prereleases, and you should be on your way to enjoying competitive play.

Information about prereleases and PTQs can be found at the magicthegathering.com tournament center. Contact local stores for information regarding smaller local tournaments.

The DCI Universal Tournament Rules and the Magic Floor Rules, along with a number of other documents, can be found at the DCI Document Center.

See you next time,