Back around rotation in September, we announced that we'd launch our first non-rotating format, Historic, with the November update. We're here now to share what that means, how Historic works, and the new cards that will soon be available there.

Our goal is to make Historic a competitive format that pairs with Standard, starting with the following:

Historic is a non-rotating format where cards from throughout Magic's history can live together. The differentiator for Historic, however, is that as a digital-first format, it lets us try new things and grow the format in unique ways.

(Of course, we're aware that players also want play modes that sync up with paper, and we intend to deliver on that in the long term. Read about our other plans for going beyond Standard right here.)

Magic has a deep, rich history of cards and deck archetypes, and we're excited to bring some of those old favorites into MTG Arena. We can't implement everything at once, but we can actively build and expand the format over time. Historic will grow both forward and back, and you'll see the first steps in the new cards coming in what we're calling Historic Anthology 1.

We're kicking things off with 20 new cards in Historic Anthology 1 that have been carefully selected to expand the format in interesting ways. Some are nostalgia plays, some are fun build-arounds to enable new archetypes, and some are powerful new tools.

Being purely digital, we can curate Historic much more actively than is practical for physical Magic. Are there not enough viable archetypes? We might drop a card or two to create new options. Is something dominating the format more than is healthy? Then we'll step in to address it. That might be a full ban, as players are familiar with, or it might be a suspension, where we pull a card from Historic temporarily to see how things change. We can respond quickly to how the format develops, giving us the freedom to push boundaries.

The March of History

Historic fully launches with our November update, bringing new cards, events, and a ranked queue. Here's an overview of everything coming up (you can also see full details here):

Historic Anthology 1 – First of all, Historic Anthology 1 will be available with this update! These 20 cards can all be crafted using wildcards at a 1:1 rate, or you can purchase a complete playset of every card—80 cards in total—in the Store for 3,400 gems. (If you want to see the cards being added, stick around!)

Historic Anthology Event – To go with these new additions, our Historic Launch event will run from November 21–25. Entry costs are 200 gems or 1,000 gold, and you can play as many Best-of-One games as you want, earning cosmetic rewards for five of the new Anthology cards along the way.

Ranked Historic – Then, once you're ready, jump into the Best-of-Three Ranked Historic queue. This also opens on November 21, and it will run through January 15 (the day before the release of Theros Beyond Death). Progress in this queue will affect your Constructed rank, just like Ranked Standard does, so you'll be able to qualify for MCQs through your Historic play (cards willing, of course).

Historic Tournament – To close out this Historic launch with a bang, we'll hold Arena's first major Historic tournament just before the release of Theros Beyond Death, where you'll get a chance to prove your skill in the new format and compete for some epic prizes.

Ongoing Historic Events – When Theros Beyond Death releases, Historic will transition to the off-season. We'll have an evergreen Best-of-Three Historic event so that competitive Historic players will always have a home, but MTG Arena's focus will turn back to Standard until Historic Anthology 2, currently planned for March 2020.

Historic Play Queue – And, of course, Historic will always be playable in the Play queue for quick, casual, Best-of-One games. (Data shows that players don't often stick around for games two and three in a no-consequences queue like Play. This leads to fewer players in the queues, and worse matches all around. For serious Historic play, the ranked queue and evergreen event will offer Best-of-Three, but casual digital play works better in Best-of-One.) While playing Historic in the play queue does not reward daily win progression, all other game modes discussed above will.

So, what will you get to play with in all of these new events? Answering that question was quite a challenge! Magic has a long history, and each set for the past 26 years has had its share of powerhouses, nostalgia, and offbeat cards looking for a good home. We compared personal favorites, surveyed people from all over the building, and dug through website after website in search of the right cards.

Ultimately, with only a handful of slots to fill, we needed to narrow things down. These cards would have several core goals to fulfill:

We'll learn more about what Historic wants as all of you dig into it, and future Anthologies may lean more in one direction or another as a result. But today, we want to provide cards for a variety of approaches, from casual brews to cutthroat competition. We think that there's something here for everyone. But enough standing around—let's take a look! 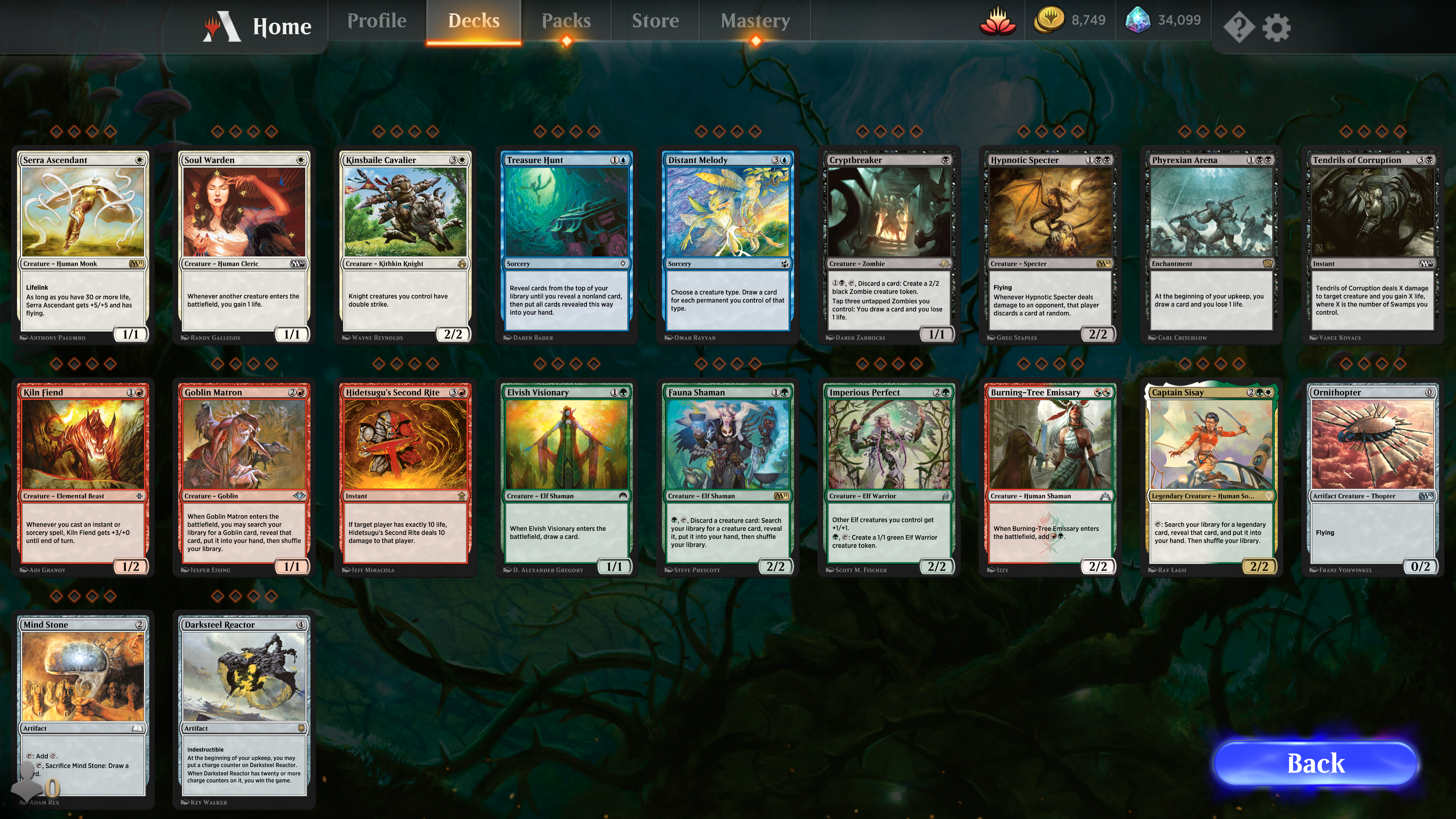 To dive deeper into the possibilities these cards offer, we have decks to share from some of the first folks to tinker with them: our friends upstairs at the Tabletop Studio. Here's Ian Duke to tell you more.

Hi, all! To celebrate the addition of these new-to-MTG Arena Historic cards, I asked play designer Zac Elsik to build some decks to share with the community. We had a blast playtesting with the new cards, and hope these examples help get you started brewing!

4 Kaya's Wrath 3 Dance of the Manse

Based on the Dance of the Manse/Doom Foretold decks that were popular early this Standard season, this deck gets new powerful additions in Mind Stone and Phyrexian Arena. Mind Stone is a card sure to make waves as a colorless two-mana accelerant that any deck can play. In this deck, it can help power out an early Doom Foretold, or, in the late game, power up a Dance of the Manse either from the battlefield or from the graveyard. Plus, in a deck that features a lot of "air" (cards that do little else but cycle into another card), being able to cash in a mana source for a chance at more action is always handy.

Phyrexian Arena is just a plain powerful card in any black deck, but here it does great work keeping a steady flow of fodder going for Doom Foretold. If all else fails, or if you're low on life, you can even sacrifice Phyrexian Arena to keep your Doom Foretold around an extra turn. Plus, it adds to your artifact and enchantment count for Dance of the Manse.

Hidetsugu's Second Rite is perhaps the card Zac and I were most excited about. Not only does it create a satisfying "achievement unlocked" moment when you nail your opponent with it at the perfect time, but it may actually be a strong angle for a Historic mono-red aggro deck to embrace.

Compared to Modern, Historic has fewer incidental ways for a player to change their own life total—there are no fetch lands or pain lands, for example. With a high number of otherwise reasonable aggressive cards that deal damage in increments of 1, this deck should have little trouble getting an opponent to exactly 10. And, if your draw happens to not include Hidetsugu's Second Rite, it's all the more likely you'll be able to deal the full 20 naturally.

Zac made sure to explore some more offbeat strategies enabled by the new additions. Here's a midrange value deck centered around Captain Sisay. As any Commander player can tell you, Captain Sisay, while fragile, is capable of generating tremendous advantage when she goes unanswered. Not only is there a wealth of powerful and specialized legendary creatures and planeswalkers for her to tutor up, but thanks to Dominaria's cycle of legendary sorceries, you can also use her to tear down your opponent's side of the battlefield. The best part of brewing around a shell like this is that you can mix and match whatever toolbox of legendary cards you enjoy.

As a personal fan of resource-denial decks like Legacy Pox and Modern 8-Rack, building around Hypnotic Specter and Davriel, Rogue Shadowmage really piqued my interest. While this particular list goes all in on the discard plan, I can also see a lighter package of Kitesail Freebooter into Hypnotic Specter working well in a midrange shell.

Another good use for Hypnotic Specter is out of the sideboard in an otherwise creature-light control deck. If your opponent isn't packing mana-efficient answers like Shock or Disfigure, or is tricked into siding them out, Hypnotic Specter can really take over a game. Also consider cheap protection tricks like Dive Down to protect Hypnotic Specter and other disruptive creatures.

We hope that this and future updates inspire players to brew and keep the Historic format fresh. Zac and I barely scratched the surface here, and we look forward to seeing what you all come up with. Until next time!

Of course, these decks are just a few ideas, and these 20 cards are just the beginning. Historic is a living format that will change and adapt in ways that only a digital format can. We'll be watching closely as you dig in, and your feedback will help us keep Historic growing in the right directions.