The release of Throne of Eldraine on September 26 heralds a new start for Standard with the yearly rotation. It's a great time to be on—or jump back on—MTG Arena. Updates to Standard, Renewal Rewards and special events throughout the month of September, as well as updates to Historic will make rotation a can't-miss event.

Throne of Eldraine's release is just around the corner and with it our Standard set rotation. Rotation is an exciting, once-a-year refresh of Standard where the environment is shaken up—when the fall set releases, the four oldest sets in Standard rotate out. 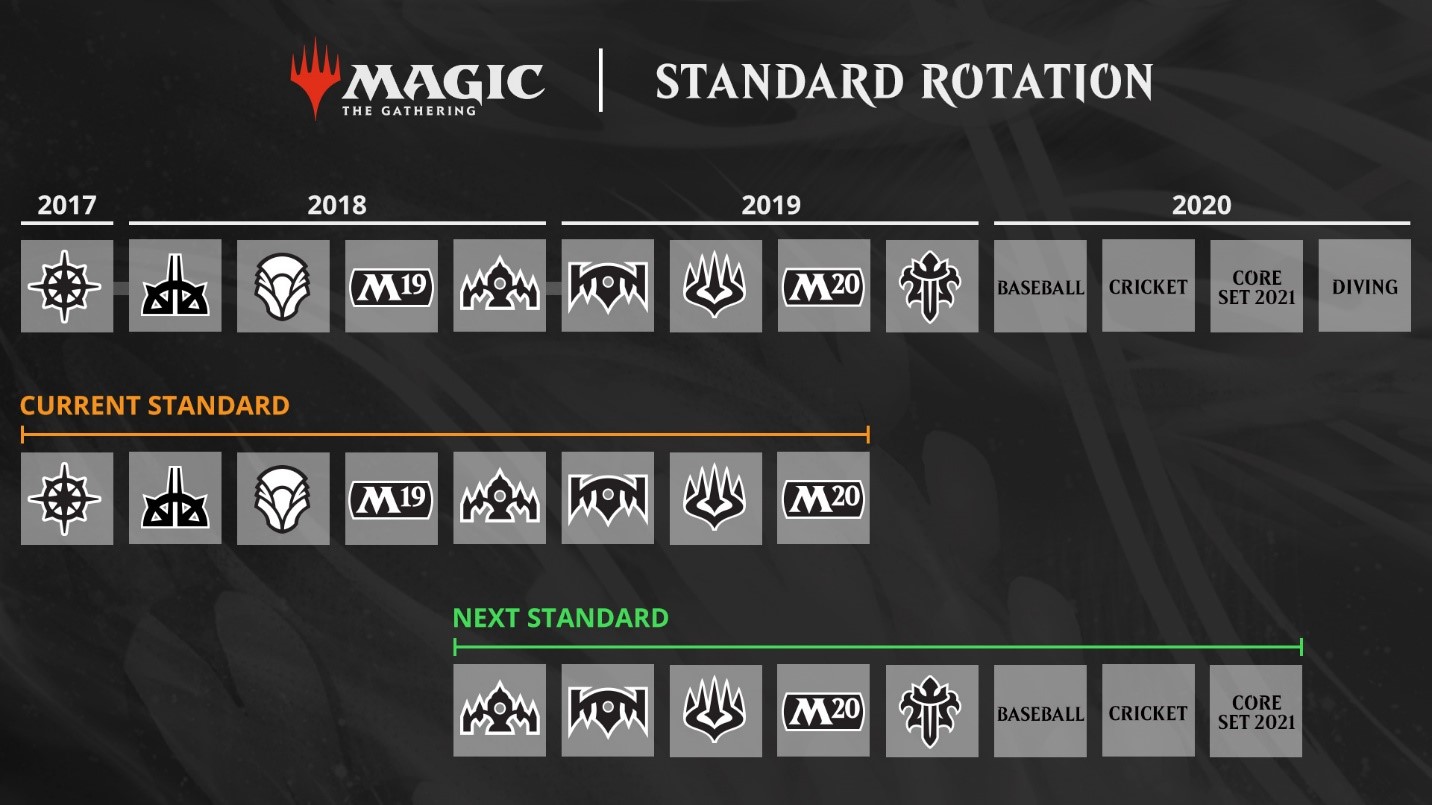 This means that in a few short weeks, Standard will bid farewell to the Ixalan, Rivals of Ixalan, Dominaria, and Core Set 2019 card sets, as we welcome Throne of Eldraine to the MTG Arena family.

Throne of Eldraine, if you haven't heard, is a new world featuring an Arthurian Legend and fairy-tale aesthetic with Magic's signature twists. Its addition to MTG Arena promises to shake up the Standard format.

With the 0.18.00.00 game update, we'll add more information in-game for players, because we want to be extra sure that everyone is prepared for the exciting times ahead.

The Big Questions and Answers—Again! 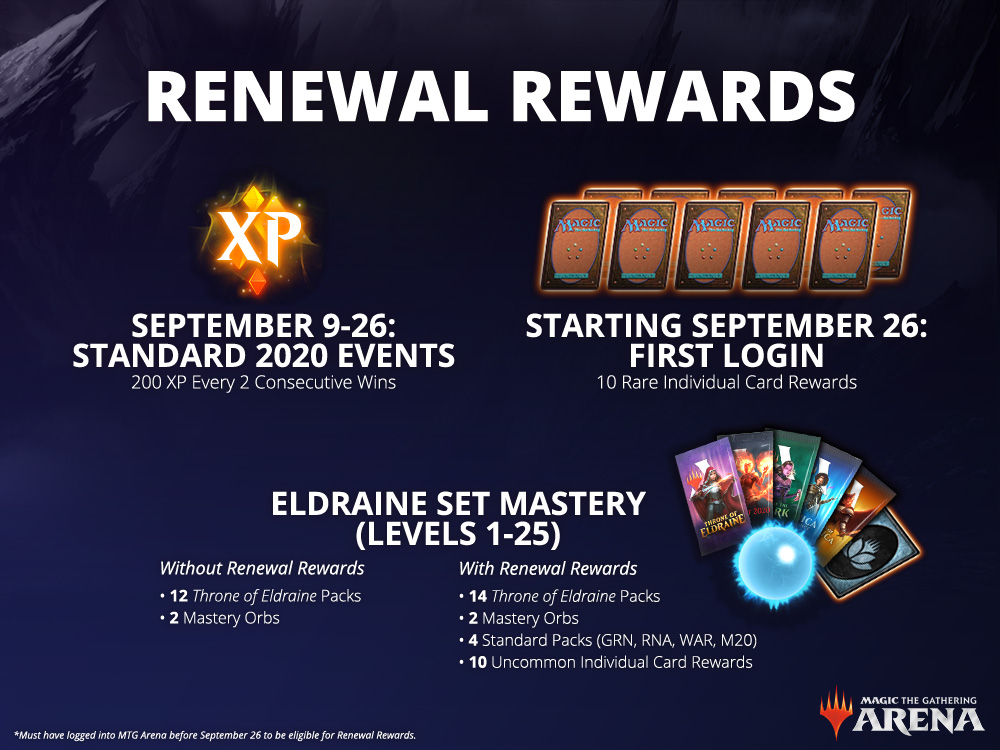 With a new card set, on a new Plane, and a new Standard environment, we want to give you a warm welcome to Throne of Eldraine. This means special events and rewards leading up to its release on MTG Arena, and then we keep the party going with even more earnable rewards after September 26.

Starting on September 9, we'll be holding special Standard 2020 events that will help you get ready for the new Standard. These events will allow you to play with decks only using cards from Guilds of Ravnica forward. As we head into Throne of Eldraine preview season, this is the perfect opportunity to brew some decks while keeping an eye on the new cards you may wish to add when the set releases on September 26.

These events will have no entry fee, will be available in Best-of-One and Ranked Best-of-One match structures, every two consecutive wins will reward you 200 Mastery XP, and you can play them as many times as you like. Looking for a way to catch up on your Core Set 2020 Mastery pass, or maybe finish off those last few levels? Play. As. Many. Times. As. You. Like.

Players who've logged in to MTG Arena prior to September 26 will also have a special renewal gift waiting for them: 10 rare or higher individual card rewards (ICRs) from the Standard 2020 sets, including Throne of Eldraine. A new set release also means a new Set Mastery, and our renewal gift extends to this as well. We'll be adding additional rewards to the first 25 levels in the form of uncommon ICRs and booster packs, and these additional rewards will be available to all renewal gift recipients—no Mastery Pass required!

Again, these renewal gifts are only available for players who have logged in prior to September 26 to help kick-start their new Standard collection. We're not joking when we say now more than ever is a great time to play!

When we first started talking about rotation and renewal, we also introduced our plans for Magic: The Gathering Arena's non-rotating format, Historic. At the time, we announced that Historic would only be available as a Best-of-One Play queue, and there weren't any plans to add additional events, older sets, or Ranked queues at that time.

And today, we're here to say that most of that has changed!

After considering some player feedback, we went back to the drawing board and decided on some core criteria for our non-rotating format, Historic:

But with great criteria comes great complications (or something along those lines). How do we balance existing player collections while still making a format accessible to players who want to jump in? How do we make it feel distinct from Standard while balancing the development time needed to add older cards? If we add new-player queues for a brand-new format, what does that mean for the quality of matchmaking, including how long it takes to find a match?

Well, we put a lot of thought into these questions, and we're excited to share the changes we've made.

Let's start with bullet point #1: How can Historic provide a fun, unique digital experience that didn't just feel like "Old Standard"? Well, the answer of "add new cards to Historic" may seem rather obvious, but we landed on a pretty awesome way to leverage MTG Arena's digital playground and growing catalogue of Magic cards.

Starting in November, we plan to add new cards to MTG Arena from across Magic's history for play in Historic formats and events. No restrictions on set, types, or rarities, no-holds-barred new. We also plan to do this regularly, starting with approximately 15–20 cards in November, with a reoccurring goal of adding more new cards every quarter after that. These cards will mostly come out independent of Standard sets (and we'll get to that in second).

We know players would love to see entire sets added to MTG Arena, but speaking candidly, the development time required to add hundreds of cards from older sets, knowing that only a few may have a positive impact on Historic, was more time than we could honestly commit. Adding full non-Standard sets may come eventually, but right now, we'd rather focus on adding meaningful cards on a timeline players can look forward to.

We are working with Magic R&D to help ensure the new additions create a fun and interesting format, but we're also interested in player feedback on which cards you'd be most excited to play with on MTG Arena. As we get closer to November, we'll be looking for direct input from players on which cards to prioritize, so be sure to keep an eye out!

One for the History Books

On to bullet point #2: How can we add a competitive aspect to Historic? And, if you answered, "add a Ranked queue," you'd be correct.

When adding a competitive aspect to Historic, we want to be careful that we do so in a way that allows us to gauge the health of the format and the quality of matchmaking before diving any deeper. Once we get a feel for how Historic plays, we'll look at adjusting how often Ranked play is available and whether Historic should have its own rank separate from Standard. Right now, we plan for it to be available for approximately the last four weeks of a card set, with the length depending on the time between set releases.

The other way we're looking to expand on Historic play is by planning to hold at least one Historic event per month starting in November. Monthly events should range from Historic versions of Singleton and Pauper, to potentially entirely new ways of playing. We're also planning for some of these events to be a way for players to add those new cards we mentioned earlier to their collection. Currently, the event we have planned for November will have an entry fee, but players will also receive copies of the new cards when they join. We'll have more information on these events as we get closer to the November game update.

Until then, you can still use rotated cards in the Best-of-One Play queue as we announced back in June. While there will only be one "Play" option, decks that contain non-Standard cards will only match against similar decks, and vice versa.

Of all the criteria we set, bullet point #3 was probably the trickiest to navigate. We want to ensure that players new to Magic can still learn the ropes and start their collection through Standard and Draft as the primary methods of play, with Historic available to seasoned players looking to explore more of Magic's rich history. But we also needed to look at the long-term impact Historic would have on MTG Arena as a whole, as we move toward supporting it as a true non-rotating format.

It's a difficult problem to tackle, but to do so, we're changing how Wildcards work for Historic cards. Starting after an update in November, crafting a Historic card will require you to redeem two Wildcards of the appropriate rarity instead of one. If a Historic card also appears in a current Standard set, players will be able to redeem one Wildcard for one copy of the Standard version, however, the Historic version will still require two. For example, you can play Luminous Bonds in Historic whether it's the Rivals of Ixalan version or the Guilds of Ravnica version, but starting in November the Rivals of Ixalan version will cost two common Wildcards, while the Guilds of Ravnica version will cost one common Wildcard. Both versions will be playable in both Historic and Standard.

To give players some lead time on the transition, we're not going to make this change until November, giving players time to craft any Historic cards at the current 1:1 rate.

And while Historic sets are currently still available for purchase in the store, we plan to limit Historic sets to the 45-pack bundle. Historically (no pun intended), this tended to be the most popular pack bundle for players looking to expand their collection. This will go into effect starting on September 26.

Limited Historic events will be available from time to time for players who prefer drafting as a way to expand their collection. We will have more information on entry price for Historic drafts later on. Historic cards and booster packs will continue to offer duplicate protection and contribute to Vault progress the same way that Standard sets do.

Finally, we'd be remiss if we didn't call out that the Throne of Eldraine preorder will also be available starting September 4. As with previous preorders, for a limited time only, you'll be able to purchase 50 Throne of Eldraine booster packs for $49.99 USD/€50.00. You'll also receive a card style for redacted, as well as a card sleeve you'll be able to use as soon as your order is confirmed.

That's a lot to cover, and there's a lot more happening in the upcoming weeks. To summarize, players will still be able to use a Play queue on and after September 26 to play with either Standard or non-Standard decks, and players can expect the full launch of "Historic as a format" sometime in November. For a breakdown of our current plan, here's all the important dates and the changes happening with them:

Renewal season is about to begin, set rotation is coming soon, and Historic's in the making. Our next game update is scheduled to go live on September 4, which is next Wednesday. Keep an eye on our status page for exact maintenance times or follow us at @MTG_Arena for the latest updates.