Alrighty—who's ready to rise among the worthy once again? Next week heralds the return of Amonkhet and Hour of Devastation to MTG Arena in the aptly named Amonkhet Remastered.

Let's look at some of the nitty-gritty, sun-blistering, sand-blasted details:

It's been a few years since we've faced the trials of Amonkhet, and a lot has changed since then

While many of the mechanics from the original block will be familiar (cycling, counters, casting cards from your graveyard), others have been remastered to fit the updated look and feel of MTG Arena. For example, both embalm and eternalize cards will appear as "near-hand castables" once the respective card is in the graveyard and feature a themed enters-the-battlefield animation when using either ability.

The keyword action exert now uses an interface like sacrifice abilities. When attacking with a creature, you will be able to choose between attacking as normal or exerting. Exerted creatures will feature arrows when they are attacking and will have a specific tap visual effect to remind players that it doesn't untap during the owner's next untap step. Once that untap step has passed, the card will appear tapped as normal.

For more info on how all the returning mechanics work, check out the Amonkhet and Hour of Devastation mechanics articles.

Where to Find Previews

Looks like Nicol Bolas isn't the only thing lurking behind the grand façade of the sheltered city oasis.

There's a whole lot of desert out there, and doubtless more secrets have been revealed in the wake of a world-ending event. If you're wondering why we put a little "*" at the end of our total cards, keep an eye on these initiates as the Hour of Scheduled Maintenance draws nigh

For more info on where to find Amonkhet Remastered previews, head over to our dedicated article.

While Monday's banned and restricted announcement is certainly a taste of what's to come, it's somehow August already, which means rotation is right around the corner. Next month, Standard bids farewell to Guilds of Ravnica, Ravnica Allegiance, War of the Spark, and Core Set 2020 as Zendikar rises once more. 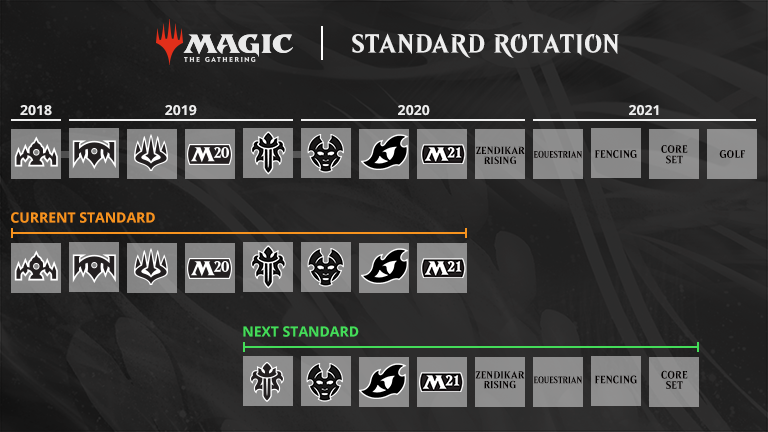 While these older sets will continue to find a happy home in Historic, for those of you looking forward to the year ahead—why wait?

Starting on August 13, we'll be adding two additional, albeit temporary, queues for players to join: Standard 2021 Play and Standard 2021 Ranked. Both queues are Best-of-One and will only allow decks featuring cards from Throne of Eldraine forward. These queues let you get a preview of what next rotation might look like in case you want a head start on building your new deck or just a break from current Standard.

These queues will be available until September 17, at which point timelines converge, rotation happens, and Standard 2021 and Standard become one and the same. Additionally, players can look forward to a Standard 2021 Artisan event, August 22–27.

The egg is back! Players who have logged in prior to September 17 will receive a special renewal gift for them once rotation happens to help them kickstart their new Standard collection. You'll find our green little vessel nesting on your profile page—more information on what's incubating inside will be announced early September, but you should expect some bonus in-game card rewards, Zendikar Rising boosters, and a special card sleeve to commemorate the occasion. 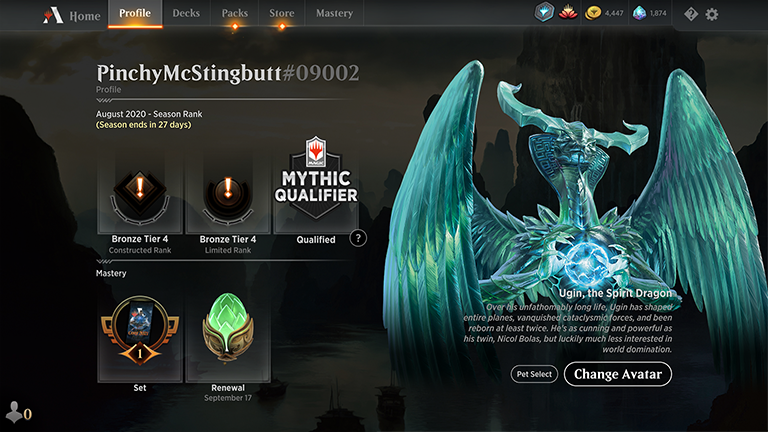 Our new player decks are also getting their yearly overhaul to ensure they're rotation-proof come September. To ensure all players have a deck ready to go for Standard 2021, if you've already completed the new player Color Challenges (or before that, Account Mastery), we'll automatically add the 2021 decklists to your collection, building from your current collection and granting any cards you're currently missing.

Another change ensures that the monocolor decks you receive after the tutorial matches stay rotation-proof—both this year and beyond. To do this, the updated 2021 decks are built from an MTG Arena base set featuring cards that will stay legal in Best-of-One matches for now until further notice. We worked closely with Studio X to select introductory cards that are good for new players learning to play Magic: The Gathering for the very first time and provide some obvious choices for cards players may look to replace when upgrading their decks.

We plan to continue updating the two-color decks each rotation.

Until Next Time, Jumpstart

This is a friendly reminder that Jumpstart will be leaving our available events on August 16, so if you're looking to mix and match some ridiculous decklists (or grab those thematic basic lands), this is your final chance!

At least for now. For those of you who love the format, don't panic. We love it, too, and it's a matter of "when, not if" we bring it back. In the meantime, we hope both Amonkhet Remastered and our Standard 2021 queues will provide new and exciting ways to play.

A few small things we want to call out for the August update. First, we'll be making some adjustments to matchmaking, specifically with how we weigh certain commanders. While those two are not an exhaustive list, our goal is to nudge players with more competitive decks toward each other and give a little more breathing room for those running a more laid-back decklist. We'll be watching how these changes affect the matches and matchmaking, and we will be tweaking things to make sure all players are getting the kind of matches that suit their deck's style.

Second, we'll be adding Runed Halo to the Standard Brawl banned list, effective August 13. As a general reminder, Brawl maintains a separate banned list from Constructed Standard, and players will not receive wildcard grants for cards banned in the Brawl format.

Last, but certainly not least—Runed Halo and Gideon's Intervention will be added to the Historic Brawl banned list. This will also go into effect on August 13, with our next planned Historic Brawl event planned for the FNM @ Home event on September 4. Since it bears repeating, we'll continue to offer Historic Brawl as one of our rotating events, and we won't be reevaluating this until after rotation happens. Nothing nefarious, no pass-or-fail criteria for if or when we change the frequency or amount of support—we're just curious. Brawl was originally designed as a Standard format, and we want to get a clear picture of what happens when it goes through rotation. 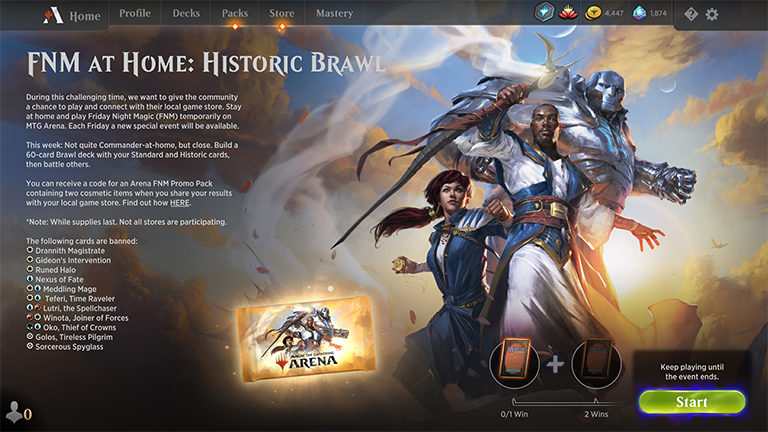 And to wrap things up, let's add some functionality to our advanced search options! Players can now search by:

We're also adding the functionality for y'all to search by certain traits using the "?" modifier:

And remember—these search options can be combined, so searching "?commander m:g" will return all commander cards with green in the casting cost! For a deeper diver into our advanced text search options, head over to our dedicated article.

Return to the world of Bolas's reign with Amonkhet Remastered, the first (but certainly not the last!) MTG Arena–only Remastered set! Our next game update is scheduled to arrive on August 13, so keep an eye on our status page for the latest information and updates on scheduled maintenance.