Jumpstart, Magic's easy-to-learn, wildly fun format, will be arriving tomorrow on MTG Arena! Are you ready to mix, match, and cause mayhem across the 46 different themes and 121 possible 20-card lists that include hundreds (literally hundreds) of cards that are available for the first time in MTG Arena?

Yes, of course you are!

Jumpstart was designed to provide fast, easy-to-learn, hilariously fun replayable Magic—and we're bringing the same experience to MTG Arena as you'll see in tabletop, from your Well-Read Dinosaurs to your Spooky Rainbows. And yes, we are enjoying finding some of the most absurd-sounding theme combinations when talking about this format, thank you for noticing.

Playing Jumpstart in MTG Arena is as simple as: Join. Pick. Play! 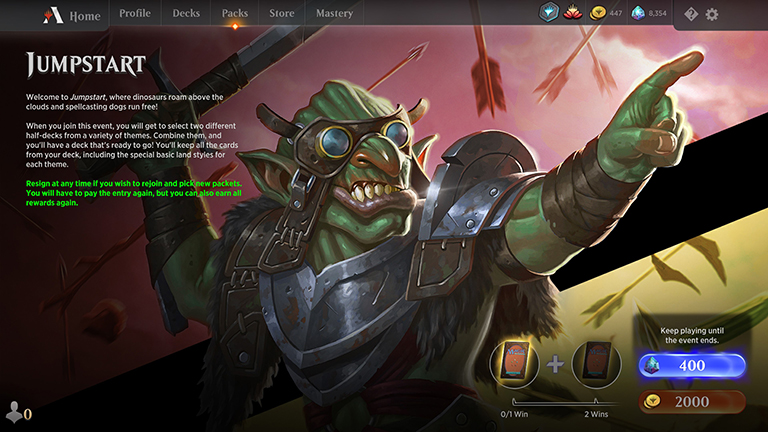 Like our Draft and Sealed events, Jumpstart will have its own landing page where you can join the event, inspect your deck, and track your win rewards. 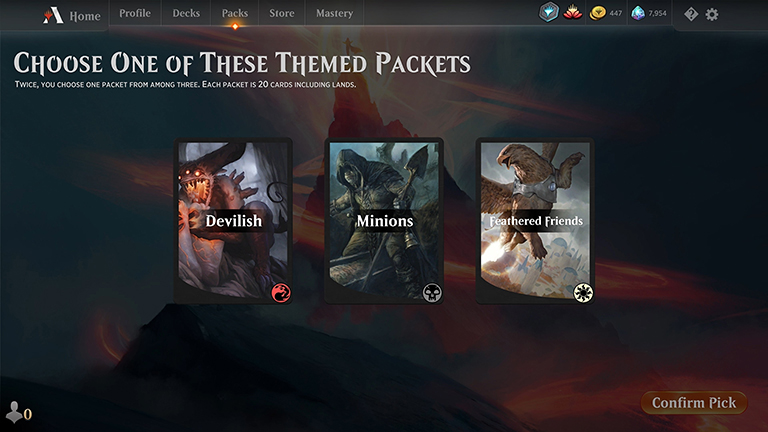 After joining the event, you'll get to pick your themes in a two-step process. First, you'll be shown three possible themes pulled from the dozens of possible ones and you pick one! Then, you'll be shown three new-ish ones and you pick again! New-ish, because while you might see the same theme both times you pick, most themes have multiple possible card lists (and for more info on that, you can view the tabletop decklists here).

And that's it! We'll take your two themes, mix the card lists together, and voila! Your deck is ready to go. You'll be allowed to play each of your Jumpstart decks during the event as much as you like—and you'll earn two rare Jumpstart individual card rewards for your first two wins.

Additional details can be found in our dedicated Jumpstart article, so we encourage you to meander over there for more info. 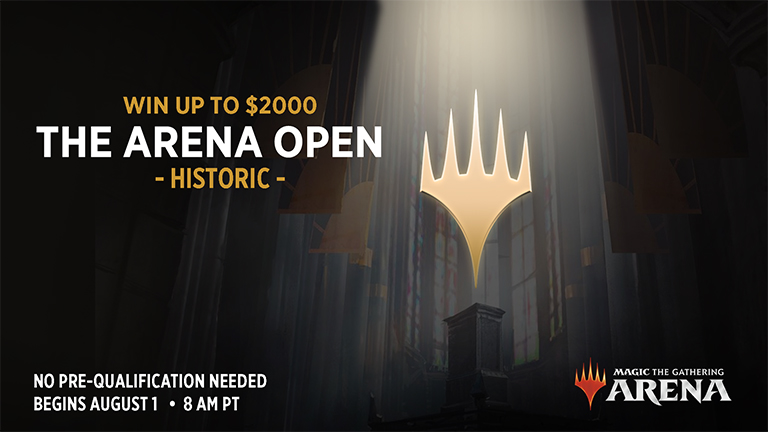 Now, before we go any further

Our two-day competitive event returns and, with it, your ability to receive monetary rewards by playing MTG Arena! If you participated in our inaugural Open back in May, we'll be using a very similar event structure with one-notable difference—the format! Our next Arena Open will feature the Historic format, which does include those hundreds of cards we're adding with Jumpstart. And in case you missed it, you might want to check out Monday's banned and restricted announcement for other changes to the format.

The other change is how the Arena Open fits in with the rest of Magic Esports. As was announced yesterday as part of the 2020–2021 Magic Esports season, players who earn five or more match wins on Day 2 of an Arena Open will also be eligible to participate in the next Qualifier Weekend.

While we recommend you head over the Magic.gg for full details, this change will go into effect with this upcoming Arena Open. If you earn five or more wins on Day 2, you'll also be earning a spot in the upcoming Zendikar Rising Qualifier Weekend. We do want to note that while we plan to hold Arena Opens on a regular basis, players shouldn't expect one every month (and therefore, for every Qualifier Weekend); reaching the top 1,200 in Mythic—Constructed or Limited—during a ranked season will continue to unlock invitations to a Qualifier Weekend.

Day 1 will be Best-of-One Historic Constructed matches. You will play until seven wins or three losses (whichever comes first), with seven wins earning you qualification for Day 2. You'll be able to enter Day 1 multiple times, which means you'll have more than one opportunity to qualify for Day 2.

In addition to the prizes outlined above, every participant will receive card styles for five new-to-Historic cards through Jumpstart. Just as before, these special rewards will unlock as soon as you join the event, so you'll be able to use them during your matches:

Day 2 will consist of Best-of-Three Standard Constructed matches. Again, you'll play until seven wins or two losses (whichever comes first), but unlike Day 1, you'll only have one opportunity to compete. Once you complete your Day 2 matches—that's it! You'll receive rewards based on your event record, culminating with $2,000 USD if you manage to earn seven wins.

For this iteration, we didn't do any particularly major changes. Our three key goals for this event was easy access, convenience, and to provide high rewards to match the high skill necessary to reach the top prizes, and so far, we're happy with the results.

One thing we want to call out is that we are sticking with our Day 2 signup deadlines. Based on our experience with Mythic Qualifier weekends and our first Open, this is the best method we currently have when balancing a limited player pool with asynchronous play. We want every player who qualifies for Day 2 to be able to complete their matches, and enforcing a deadline helps prevent scenarios where somebody joins without enough time or remaining opponents to finish their matches.

We did add additional in-game information regarding these deadlines, and we'll be sending out day-of reminders on our social channels to ensure that everyone has multiple reminders of any pending deadlines. 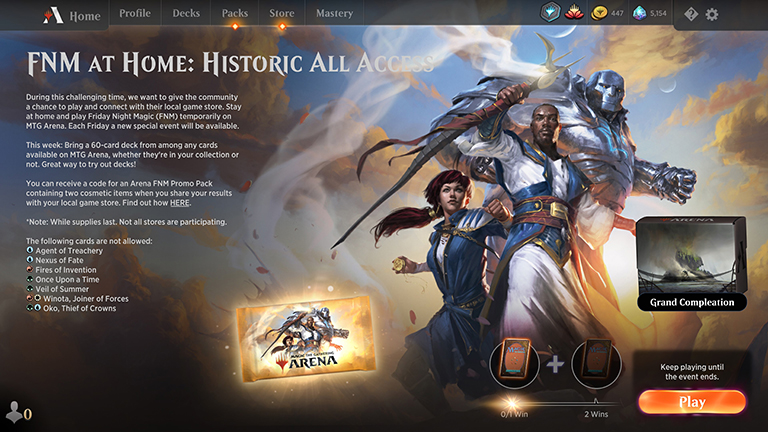 On Friday, July 24—one week before the Arena Open—we'll be hosting a special FNM @ Home event where players can build decks and play games using every card available in Historic. Yep, full playsets of every Historic-legal card, even if they're not in your collection. Full access to the Historic card pool will only be available when playing through the FNM @ Home event for the week, though any deck you create will be saved to make it easier to craft and play with once the event ends.

Whether you're looking to try out some brews, test your deck against any possibility, or simply try out Historic—this is the perfect way to see everything Historic has to offer, with no entry fee or crafting required! 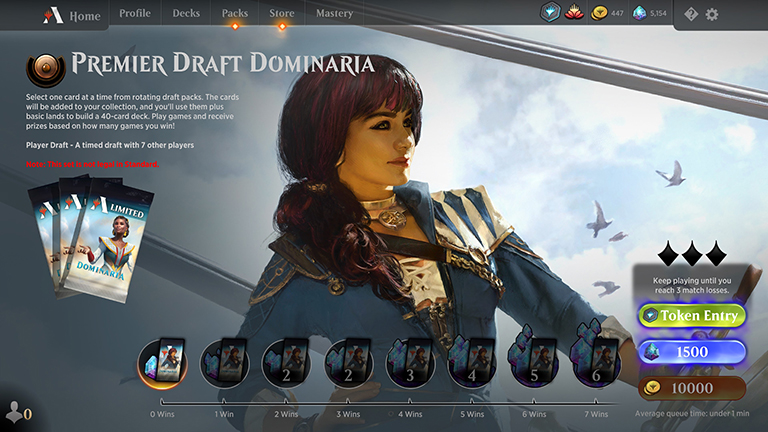 Yes, we're mixing the time streams on this one a bit, but you know what? It's a fan-favorite format, and Player Draft has only been around for a few months, so we're going to combine the old with the new because we know it's going to be fun.

From July 31 until August 14, Dominaria Draft returns to MTG Arena with fewer bots and more Teferi players to draft against!

Last, but certainly not least—more events! For those of you wishing to complete your collection of the Core Set 2021 showcase card styles, the time is now! We kick-off the Festival of Time on July 25 by looking ahead, taking a step into the future with our updated, rotation-proof new-player decks 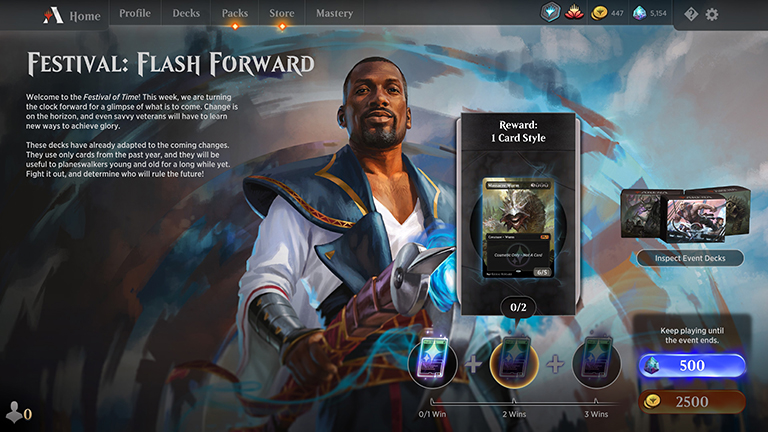 The following week, you'll need to bring the past into the present in a major way. Our Festival event starting on August 8 will feature Historic Singleton, but with so many new cards to play, we figured a little extra space in your decklist would be appreciated. While you can only use a single copy of any card that isn't a basic land, for this event, you'll need to bring 100 of them.

When we introduce Workshops back in February, our goal was to give players a small taste of a variety of formats with a low barrier to entry. A lot has changed since then. With the advent of Jumpstart, our continued support of FNM @ Home into the foreseeable future, and the always-on Brawl and Historic Ranked queues, Workshops ended up sharing a lot of the same design space as other events and options in-game with a much more limited availability.

So, we're tabling these for now as we adjust to the new normal of events and formats in MTG Arena.

Alrighty. Now that we've covered everything coming in July 2020—let's look at what else we have on the roadmap for the rest of 2020 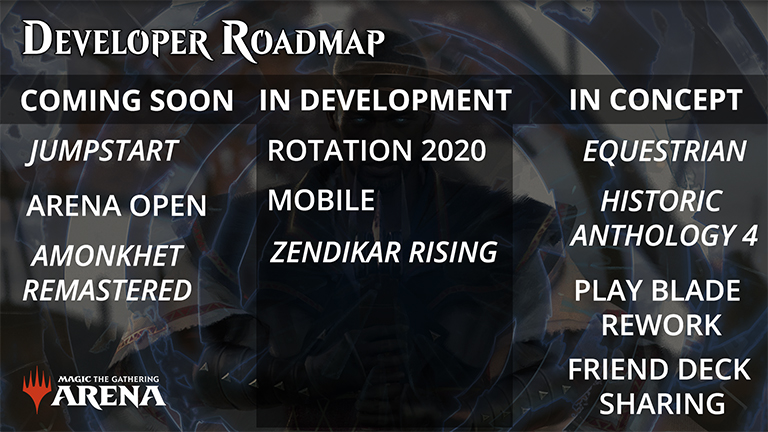 One thing that we do want to acknowledge is that some of our planned features have been bucketed in the "In Concept" column for some time now. To be clear: all of these features are still planned. 2020 has thrown us a few curveballs, and we've had to shift some of our priorities as a result. As we've transitioned a lot of our play to digital to ensure the health and safety of our fans and partners, expanding the available cards and formats has become a top priority.

The other side of this is the nature of concepting. Iteration is important, but also very time consuming. Once we nail down the core concepts and designs and move toward implementation (i.e. a feature moves from "In Concept" to "In Development"), there is usually a much smaller window between development and release. Deck sharing and reworking our play blade are still very much so on our to-do

Next month, we continue to shift through the sands of time and bring back Amonkhet and Hour of Devastation to MTG Arena in a combined set, the aptly called Amonkhet Remastered.

This is the first time we're remastering sets for MTG Arena, and it will be more than a combined re-release. Expect Amonkhet Remastered to bring the set-defining cards and iconic mechanics you remember from both Amonkhet and Hour of Devastation but with updated gameplay to make this a fun and fresh experience for all of our players, even if you were able to experience this block in its original form during Closed Beta.

The combined card count from across these two sets has landed at around 340 cards, with a focus on the Limited play experience (Draft and Sealed), Pioneer, and continued support for Historic

We hope you're ready to rise among the worthy, once again! Amonkhet Remastered is currently planned for August 13, and you should expect to hear more about our plan to unleash the endgame on August 6!

We've danced around this one a little bit, so let's just come out and say it—the next Pioneer-focused set remaster will be a Pioneer Masters set. Like the Modern Masters tabletop product, this digital card set will be looking at all the sets currently legal in Pioneer and pulling them together into a single set for both Limited and Constructed play. Players should expect our first (but likely not the last) Pioneer Masters set by the end of 2020.

Not much more to say beyond that we're also working on the upcoming Standard sets!

In addition to our Pioneer-focused masters and remasters, Historic will continue to receive our love and support. Players should expect another Historic-focused card drop in the first part of 2021.

Whew, okay. All of this (and more!) will be a part of the July Game Update, scheduled for tomorrow, July 16! Keep an eye on our status page for scheduled maintenance times, and as always—follow us @MTG_Arena for the latest news and information.

Jump into Jumpstart on MTG Arena by, Wizards of the Coast

Devilish Angels, Pirate Unicorns, Wizard . . . Wizards? Sure, it resolves. Jumpstart, an easy-to-learn, wildly fun format, will be arriving this week on MTG Arena. You'll be able to mix,...