In this month's game update, we're adding new features, new cards, and new things to look forward to on Magic: The Gathering Arena.

Performance remains our highest priority right now. With the November game update, we expect most players to see improvements, particularly during matches.

This work is ongoing, and we will continue doing these check-ins for as long as necessary to keep players informed of our current progress.

We've begun the code refactor (i.e. restructuring our current code) of our asset system, with the first batch of changes coming with this update. We primarily focused on reducing the frequency and severity of times the game would appear to "stutter" or "hang" during matches, though you may also experience better performance whenever you're viewing a lot of cards (such as during deckbuilding).

Memory Allocation and Management – In Progress

Aka "memory leaks." We've made some improvements to how we handle asset cleanup, which should lead to less memory usage during longer gameplay sessions. We believe this may also reduce spikes in memory allocation and CPU utilization, particularly during matches.

A Note on Game Crashes

From what we can tell, most of the recent game crash reports we've received are correlated to the issues we've outlined above. As we improve our memory usage, CPU utilization, and overall game optimization, these types of crashes should decrease in frequency as well. 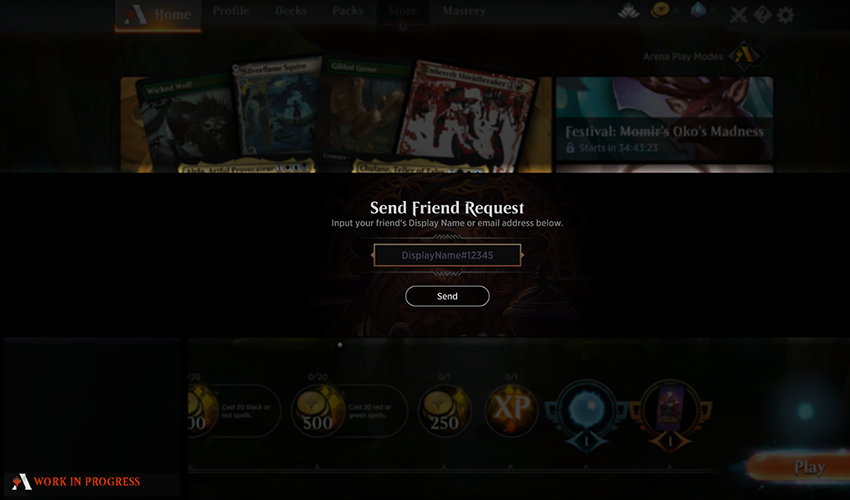 Recently, there's been a lot of discussion about what MTG Arena is ultimately meant to be as a game. To both help current conversations and lend context to the path ahead, we want to talk about our goals for MTG Arena and what this means for players as we begin to look beyond Standard.

We want MTG Arena to be a great place to learn Magic, play Magic with friends, and jump into a wide variety of Magic experiences. We also know MTG Arena needs to be more than just a place to play Standard. Finding digital fun that appeals to all our players is key to that.

At a high level, all this means is that MTG Arena will feel more like your local game store, running a variety of organized events throughout the week. MTG Arena is a lifestyle game, not just a sometimes activity for most of our players. It's our responsibility to ensure that there are great new experiences every time you play, otherwise, things would quickly become stale.

We also completely understand the desire for more on-demand play so you can play formats other than what's currently being offered. That's why we are also continuing to expand Direct Challenge options and add additional social features beyond the friends list.

Later next year, we plan to begin adding "remastered" versions of older sets to Magic: The Gathering Arena. The MTG Arena team, in conjunction with Magic R&D, will be looking at multiple sets and condensing them into a single larger set that only includes the most relevant cards, and adding that to the game. This will allow us to focus on what made these sets fun and exciting for players while delivering on the content much more quickly.

This is a long-term commitment that will eventually lead to additional format support beyond Standard and Historic. Pioneer is one of the formats that we're working towards, but it'll be a longer journey before we can talk specifics. As we head towards that goal, we'll be focusing on delivering the best play experiences that these iconic card sets can offer.

We want to leverage MTG Arena's digital strengths to create a format that can adapt more quickly to what's going on in-game. Historic is our first take on this, aimed at our more experienced players, and we want to seriously explore the idea of a living format that changes as it's played.

This truly begins with the November game update when we'll be adding 20 new cards to MTG Arena for Historic play. This will come alongside a Best-of-One Historic launch event and a Best-of-Three Ranked queue.

There is enough to cover with Historic that it warranted its own article, which you can find right here.

We have always experimented with new types of events and formats, and we always will. Some have turned out to be very popular with players (Omniscient Draft, Standard Shake-Up), others, not so much (Double Life, Brewers Delight). We are going to keep those experiments going and finding more ways to have fun on MTG Arena.

There's understandable concern at the idea of doing new things with Magic. Luckily, we work closely with Magic R&D on finding the fun in whatever it is we do (check out the article here to see how our upcoming Historic work together developed). That partnership lets us remaster the past, build the best present possible, and experiment with what the future could be. While making Magic cards digital takes time, making sure they're the right cards and finding even more fun ways to play with them is our mission with MTG Arena. We're excited to explore this space with you all and see what we can add to MTG's legacy.

There are a lot of details to discuss with the above, but we wanted to share with you our strategy and direction post-launch. We can't wait to add to all that MTG Arena has to offer and continue to improve our curation of the game as a live experience. Your feedback is important to that process, and we look forward to the continued conversation.

Friends List and Historic Anthology 1 will be arriving on November 21 alongside some quality-of-life changes, bug fixes, and continued work on performance improvements. Keep an eye on our status page for the full maintenance schedule and follow us @MTG_Arena for the latest information.