MTG Arena: State of the Game – Streets of New Capenna

Welcome to Streets of New Capenna, where family means business. You've seen the cards, you've read the stories, and starting next week, you'll be able to get your piece of the action when all the glamour and glitz arrives on MTG Arena.

We all know anything is possible if you're with the right the people, and it just so happens we know a guy with all the right connections. Word on the street is if you want to know how the five families truly work, Matt Tabak is the one you talk to. But if you're looking for a little extra insight on how these mechanics look and feel on MTG Arena, you've come to the right place.

Success is more than just knowing the part, it's looking the part, and on a plane as sensational as New Capenna, you should expect a little extra flair with each of the five families' abilities. For example, when casting a Brokers card that grants a shield counter, you'll know which family you're dealing with. 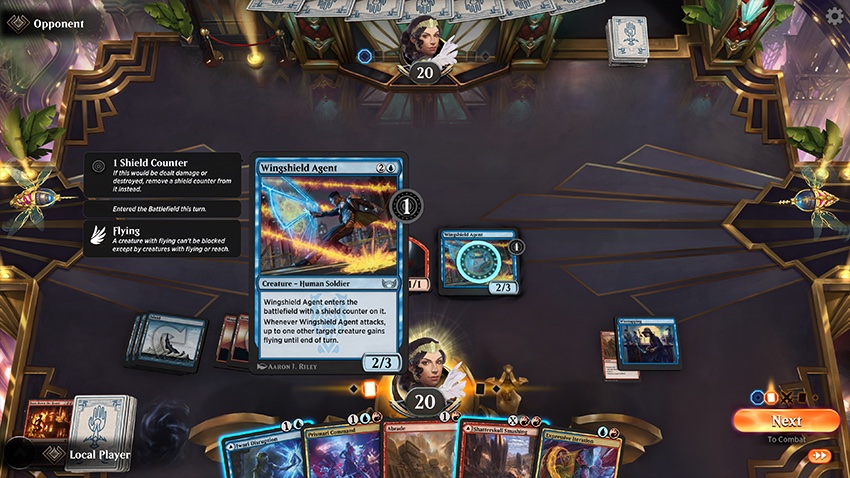 An older mechanic but new to MTG Arena, hideaway will use the browser window like other abilities that have you look at or search for cards in your library. The card you pick will be exiled and appear "tucked" under the card that triggered the ability. 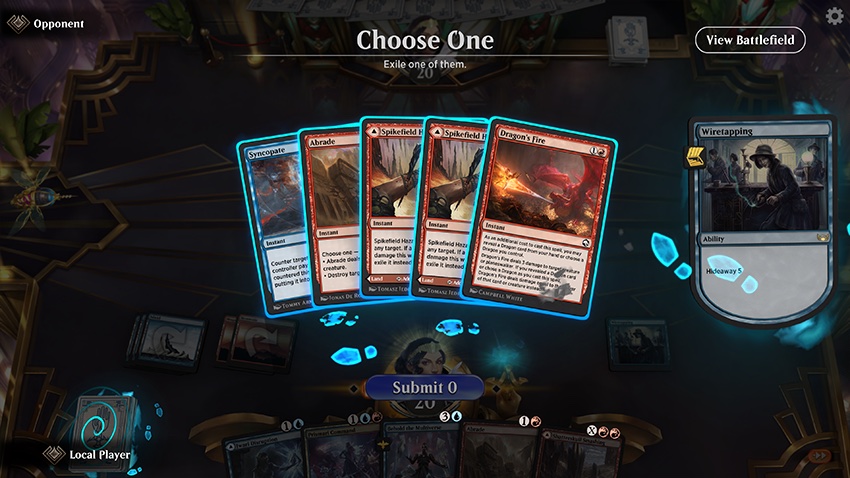 No one on New Capenna does it alone, so it's smart to keep tabs on who has your back. We've added a new "threshold" badge to make it easier to keep track of cards that care about other cards. For example, if you're a sewer crocodile who wants to know if there are five or more mana values among cards in your graveyard, well it's probably best to not keep the sewer crocodile waiting while you check, so we've made the information easy to parse. 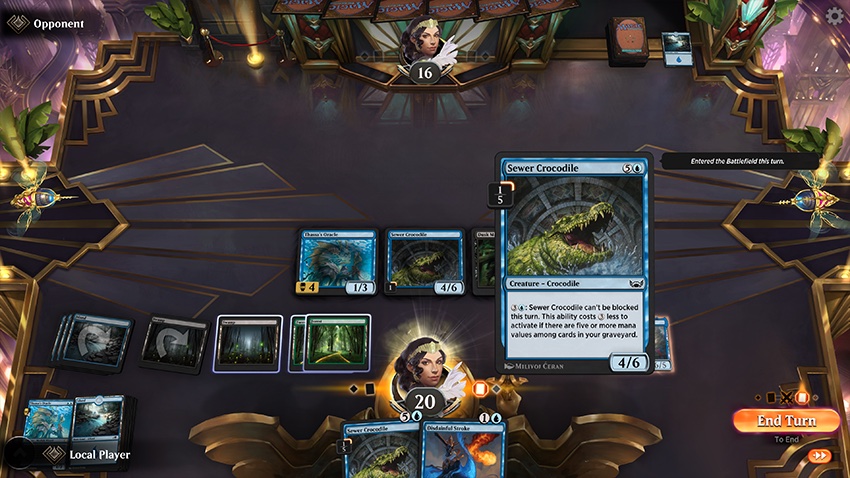 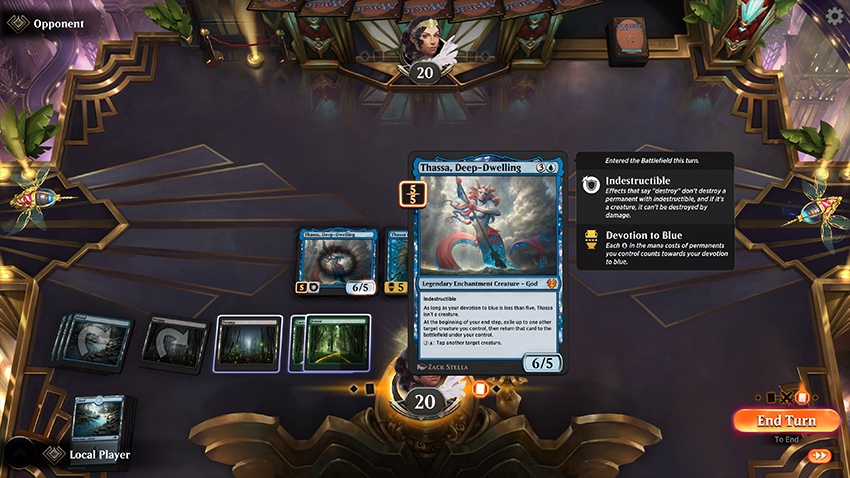 We'll be using this badge on older cards with other threshold-type mechanics, not just on sewer crocodiles and their like-minded friends. A few examples that come to mind include devotion or cards with a party count.

As always, you can manually tap your mana when prompted if you don't like the auto-tap solution, such as wanting to forgo the +1/+1 counter and save a Treasure token.

Plus, we will be rolling this out to all sets soon!

Of course, there's more to Streets of new Capenna than cards and mechanics; there are all the ways to play them! We'll have Sealed, Draft, new Jump In! packets, including our first three-color packets, one for each family. You'll find everything you would expect from a Standard card set release, and some newer options, like Mythic Booster packs, available for purchase in the store.

Speaking of have we mentioned there will be a new format to play? 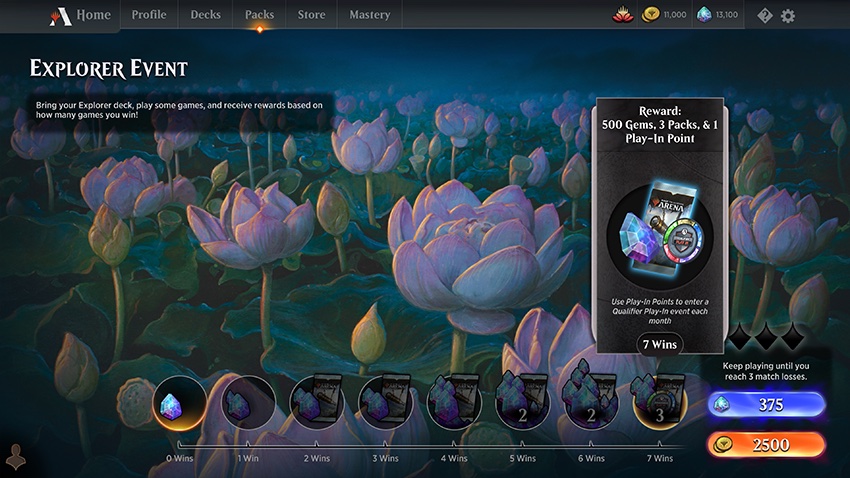 Paving a Path to Pioneer

It's official! Starting with Streets of New Capenna, our new non-rotating "true-to-tabletop" format, which we are currently dubbing Explorer, will be available on MTG Arena. For those of you who have played in recent "What Was Written" Midweek Magic events, you're already familiar with what Explorer is: a non-rotating Constructed format using all the tabletop format Pioneer-legal cards available on MTG Arena. Consider this the first leg of our Pioneer journey, where one day Explorer will be "retired" as a format, and we simply call it Pioneer (in the same vein that Classic format became Vintage on Magic Online).

Explorer will be available in Best-of-One and Best-of-Three matches for both ranked and unranked play, Explorer-format Constructed events, and specialty events like the upcoming Explorer Metagame Challenge.

If that sounds the same as everything available for Standard Constructed play, that's because it is! We plan to support Explorer in the same capacity, which also means Explorer ranked matches will contribute to your Constructed rank and you can earn Play-In Points through the evergreen Explorer Constructed events. Explorer will also be featured in some of our upcoming tournaments, so if you haven't already, you should check out our MTG Arena Premier Play announcement for information on MTG Arena's Premier Play system!

And if you're worried about where you're going to keep all these decks in your collection, good news! With the launch of Explorer, we'll also be increasing the maximum deck capacity to 100.

So, how do we plan to get Explorer to Pioneer?

Our goal is "all the Pioneer cards that matter," so when we eventually embrace the Pioneer name on MTG Arena, you should expect us to be at a point where the decks you want to play will be available. Cards will be added gradually, starting later this summer with Historic Anthology 6, which will include cards for both Historic and Explorer play.

We want to stress that supporting Pioneer on MTG Arena will take several years to accomplish. "All the cards that matter" means we'll be working toward all of the cards that are regularly played in Pioneer decks, much the same way that Vintage on Magic Online doesn't contain every 2/2 for two ever printed, but it does contain all the cards needed to mimic the paper Vintage format.

There are also a lot of cards in Pioneer-legal sets that were intended for Limited or multiplayer formats that aren't relevant to Constructed play or have become obsolete as better versions of the card have become available. Cards like that, as well as cards that have a high development cost with little or no play in the Pioneer format, are low on our priority list. Never say never, but our priority on card implementation will be driven by what we see in the Pioneer Constructed meta.

Now, on to the ban list. We plan to adhere to the Pioneer ban list, though there may be a times where a card becomes problematic in Explore because of the current differences in card pools. If that happens, we will not rebalance or suspend the card; we will ban it.

Rebalancing and suspending cards are tools we use for our digital-first formats like Historic and Alchemy. Explorer is meant to mirror a tabletop format, so a card will either be playable, or it will be banned. If a card is banned in Explorer, it will follow the same policy we have whenever we ban a card in Standard, Historic, or Alchemy: players will receive wildcards equivalent to the number of cards in their collection that they haven't already received a wildcard reimbursement for (i.e., cards banned in multiple formats at different times).

Eventually, as we move closer to Pioneer, we anticipate cards banned specifically in Explorer will become playable again as we realign the ban list to match tabletop, however, this does not affect our wildcard reimbursement policy. With the launch of Explorer, we currently do not have any additional cards we plan to ban.

Whew, okay. We think that covers all the important parts, but if there is something we missed, we encourage you to tune into Weekly MTG this afternoon, starting at 2:30 p.m. PT for our monthly announcement stream and Q&A session.

In case you missed it, earlier today we announced our plans to refresh competitive play on MTG Arena with both new events and revamped reward structures. While there are plenty of things in the announcement to be excited about, one of the biggest changes we wanted to highlight was the addition of the Qualifier Play-In events. 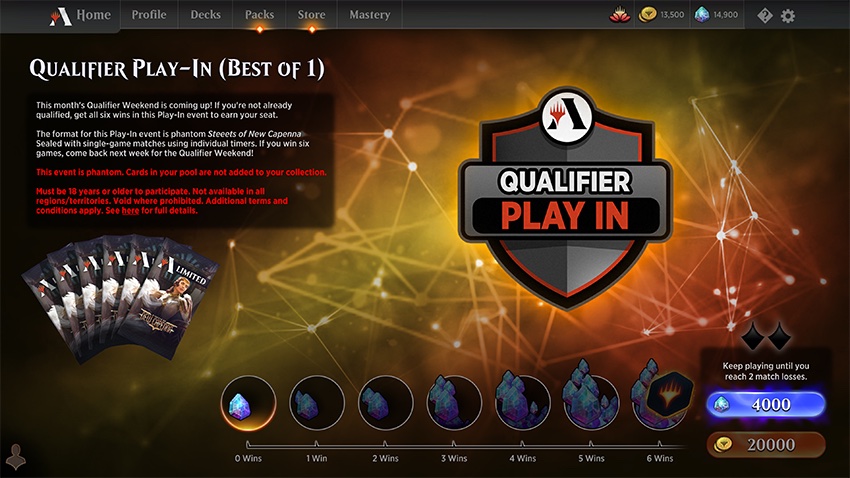 For those of you who enjoy the challenge of the ladder climb, that option will still be available, and now we'll also have a way for players to demonstrate their skill and earn a spot in a Qualifier Weekend through a single-day open play event. Not everyone is able to dedicate the time it takes to reach and stay at the top of Mythic-ranked play, and we wanted to ensure those players still had a viable path to reach the highest level of Magic Premier Play.

If you want to learn more about the Qualifier Play-In events, the three-times-a-year Arena Championship and its $200,000 prize pool, or how you can qualify for a designated Pro Tour through digital play, you can and read the announcement article in full!

The launch of Streets of New Capenna will also see us making some adjustments to a few of our event rewards, namely our evergreen Constructed events and Traditional Draft events.

First thing's first, our evergreen Constructed events refer to the in-game events that are always available for most of our permanent Constructed formats (Standard, Alchemy, Historic, and soon Explorer). These are separate from our rotating events like Singleton or Pauper, and from our play queues that have no entry fees and no additional rewards beyond those earned through normal play (quests, daily, and weekly win rewards).

These Constructed events will now have both higher entry fees but also higher rewards, replacing gold and individual card rewards (ICRs) with gems and packs. This will allow players to build their collection via Constructed play more quickly and reliably than they previously could. These events will also grant Play-In Points, which makes these events another way for players to enter Magic Premier Play.

Due to these changes, this also means that any in-progress Constructed events will end with the Streets of New Capenna game update, so be sure to finish your current entry before maintenance begins on April 28! Below, you can find the new structures:

The changes here are fairly straightforward: we wanted to reduce the "top-heaviness" of the reward structure. We've also incorporated Play-In Points. The updated rewards structure is below:

Since implementing the ability to assign cosmetics per deck, we've improved the deck details page to make it easier to see the breakdown of card information without having to scroll. And in addition to the gilded glamour of New Capenna, you'll find some of our previously available avatars now available for purchase in the store for those of you looking for more of an "old school" kind of vibe.

Say goodbye to the boring days where you could only open packs in increments of one or ten. Starting with Streets of New Capenna, you'll be able to open any number between one and ten with the "Open All" option. No more waiting to open them one by one or waiting for that perfect ten. 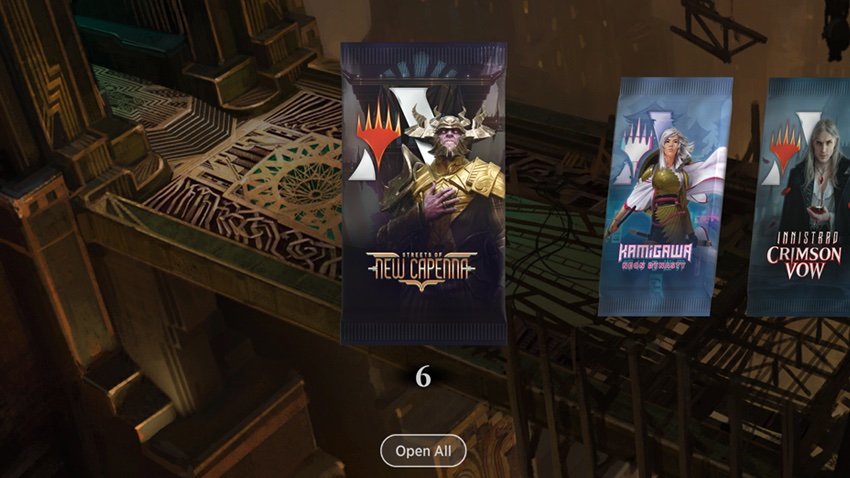 Speaking of the numbers that fall in between, your current vault percentage will now always be viewable. You'll find your current progress alongside your wildcard counts.

Gleaming skyscrapers and glittering streets shine with opportunity while creating plenty of shadows to work from. Streets of New Capenna will be making its dazzling debut on MTG Arena next Thursday, April 28. You can get an initial look at the action on Tuesday, April 26 as your favorite content creators and streamers pick sides and pick fights during our Early Access event. As always, follow us on Twitter at @MTG_Arena for the latest updates and information on scheduled maintenance times, because you don't want to be caught sleeping on these streets

Thanks for reading, and we'll see you in game!