In Chromatic Cube, be prepared to draft decks with more expensive spells, more colors, and more dreams to live in the newest addition to MTG Arena's growing cube offerings! Read on for more event details and the philosophy of this big-mana environment.

Chromatic Cube is a Phantom event. Cards you draft are not added to your collection.

Historic individual card rewards (ICRs) grant cards from pack releases on MTG Arena. They do not include cards that were released outside of packs (e.g., cards from Historic Anthologies). Historic uncommon ICRs have a 5% upgrade rate to rare. Historic rare ICRs may upgrade to a mythic rare; each rare is twice as likely to be awarded as each mythic rare.

The main goal of this cube is to deliver a cube experience unlike Arena Cube or Tinkerer's Cube. If you've followed my exploits elsewhere, on Magic Online I created the Live the Dream Cube. So, I simply applied that cube's philosophy to MTG Arena and its Historic card pool: lots of big-mana decks and a plethora of crazy interactions to help emulate Commander, all in the context of a cube!

While Arena Cube is a great overall representation of Cube and Magic, and Tinkerer's Cube involves a great deal of synergistic small pieces to craft a deck with a unique and holistically strong mechanical identity, Chromatic Cube replaces aggressive creatures with mana rocks so we can get to the good stuff: cards that cost more and do more! This is a cube where Alloy Myr makes a great ally, and there's more to Tome of the Guildpact than meets the eye

As Good as Gold

Some cubes are pure "good stuff," meaning all the cards are individually powerful, and you take the "best card per pack" in your deck of two or maybe three colors. Other cubes are synergy driven, which means you may draft a deck that is "on rails" and is looking for a very specific piece to complete your linear, sometimes parasitic, puzzle.

This is the dichotomy of Arena Cube and Tinkerer's Cube. Chromatic Cube lies somewhere in the middle. A lot of the cards are individually good in decks, but there are eleven archetypes for ten color pairs in the game to guide drafters. Not all decks of the same two colors will be the same of course, but if you see an off-the-wall card, you can trust that the cube can support it. And since this is Chromatic Cube, you can bet that there will be enough fixing available to often play more than two colors.

Of course, there are many, many small strategies outside of these eleven archetypes; these are just the loud directions the cube will call out for you to try. Just don't try too hard to draft an aggressive deck that aims to curve out in the early turns with small creatures. This ain't that kind of cube.

Let's just take a look at the ten archetypes, shall we?

Creatures with abilities that trigger when they enter the battlefield are great! What if you could get those abilities again? And again? It'll be Groundhog Day for your opponent as you ride your avalanche of card advantage into the sunset.

Sure, your deck might be sweet, but what about your opponent's? Utilize your opponent's cards in this controlling archetype to beat them at their own game. Just make sure you've got enough removal, as this is the slowest archetype, and you better hope your opponent drafted a good deck! Take all the fun, and give nothing back.

Not only will this archetype remove your opponent's creatures, you'll remove your own. But I promise it'll be a good time. You'll use their delicious life essence to further your own schemes by drawing cards, draining life, and doing all the other things Rakdos mages like to call "fun."

Creatures are the way most Magic decks win games, and this deck has the best ones! Creatures in this archetype can add mana, draw cards, remove other permanents, and most importantly win the game! Hit fast, hit hard, and hit the ground running! Meat and eggs, indeed!

While nothing could be more Selesnya than making tokens, the tokens in the Chromatic Cube come in many shapes and sizes. You'll not just be flooding the board with 1/1s, but they're often doubled in number, quadrupled in size, and octupled in their capacity to brawl!

If you're not familiar with this Macabre dance, the steps are simple: get a large, expensive creature in the graveyard, and bring it back to life on the cheap. The mana value in the top right of a card is merely a suggestion! What is dead may never die.

Draft some mana ramp, big spells, and some copy effects, and what do you get? The most fun you can have! There are lots of pieces to this strategy, but if the plan all comes together, you'll be playing a completely different game than your opponents. Extra turn effects are particularly potent in this cube, so don't waste any time in taking them. 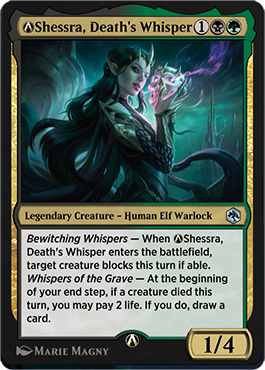 While Blue-Red Storm decks want to go big with copy spells, you want to go fast with damage! Use various spells to make all your direct-damage spells easier on you, and worse for your opponents! Those who control the board control the game.

Every deck should have lands, but this deck should have the most, since that's how you win! Often in Magic, the player with the most mana wins. And in this cube, that axiom is especially true, so be sure to grab all the land acceleration you can! You'll most likely be able to splash all the other good cards you see, so you mustn't be afraid to dream a little bigger, darling.

And finally, we have the bonus eleventh archetype that uses every color we can throw at you. You'll be the slowest deck, the most eccentric deck, and the deck with the most lands (I hope). What you'll also be, though, is the deck with the sweetest turns, as you'll be playing some of the most individually powerful cards in the cube. If you can dream it, you can do it!

Of course, there are many other build-around cards just waiting for you to draft and see what you can make out of them!

I hope this has given you a brief insight into the machinations this cube can assemble and some of my thought processes. I truly love designing Magic cards, cubes, and experiences for you all to play and hope this brings you some joy.

Magic creates amazing stories, but none more powerful than the journey of meeting new friends through it. So, safely join a friend and get ready to draft the most colorful experience MTG Arena can offer, and you can let me know what you think of Chromatic Cube on Twitter @J_Beleren.

I'll see you in the queues!