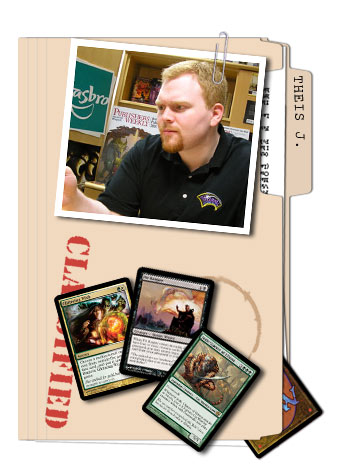 In all (probably in some) seriousness, I manage the fine folks of the R&D creative team, the guys that guide Magic’s world design, card concepting, art commissioning and development, names and flavor text generation, web site management, and a whole mess of other creative functions.

People probably think this means that I am personally in the trenches cranking away on the “fun stuff.” In reality, I get to do some fun stuff, but my job is more analogous to a restaurant manager. I keep the lights on, pay the lease, and make sure the customers are happy. The rest of the creative team inhabits positions analogous to fine chefs, expert sommeliers, and master maitre d’s. I let them make good eats, and I try to keep Jeremy Jarvis (Magic Senior Art Director) out of the wine cellar.

Beyond my work as the creative whip cracker, I am the host of the Magic studio podcast, have worked on some card design and development teams, and have done a fair bit of work on a pile of Magic-related things.

Began working at Wizards: My first position at Wizards was as a member of the Magic: The Gathering Brand team. In 2004, I answered an ad posted by then Brand Director Kyle Murray in this very Arcana slot, and within a few weeks, I was marketing the game that I love. At the time that I responded to the ad, I worked for the Marketing and Communications Department of Lewis University and attended graduate school (MBA) at the same university. My love of Magic combined with my background in marketing opened up the door to work at my dream company.

Anyway…after working a couple of years with the Brand team, the opportunity arose for me to temporarily swap jobs with now Magic Online Brand Manager and Pro Tour veteran Worth Wollpert. I was able to sit in the Pit and work on the upcoming Morningtide, "Jelly", and "Doughnut" expansions. He cranked out Excel spreadsheets and guided marketing strategy. I think I won that trade. As luck would have it, a newly crafted job opened up in R&D as the leader of the R&D creative team, and Aaron Forsythe, a then-freshly promoted Director, chose me to lead the team. I had a blast working for the Brand team, but an opportunity to work in the toy store was too hard to pass up. The team I lead now is a hybrid of the existing Magic creative team and the existing magicthegathering.com site management team.

Magic accomplishments prior to working here: Before working at Wizards, I was a hardcore casual Magic player that was beginning to metamorphose into tournament-playing butterfly. In both camps, I spent the better part of my time thinking about Magic, but I transitioned from the corner of the basement to the corner of our local cardshop (Challenge Games in Joliet, Ill). I played in Prereleases, Release Events, FNM, Regionals, States, PTQs and more! In retrospect, the Chicago Magic scene was great, and my then girlfriend, now wife, was pretty saintly for allowing me numerous hours to enact non-stop card-on-card violence.

In my basement Magic renaissance days, my friends Matt "Big Cat" Morrison and Jake "Ando" Anderson and I concocted an elaborate system for playing Magic that was revered as "The Season." In The Season, there were various drafts, auctions, sealed deck pools, multiplayer games, head-to-head duels and other machinations that required us to constantly switch cards from our pools and hunt down singles of cards as random as Delraich and Denying Wind. My favorite Magic memories come from this era.

In an effort to get better information and intelligence over our Season rivals, we all secretly stumbled across magicthegathering.com and a few other select strategy sites on the web. Once we were plugged into Floresian theories as revolutionary as card advantage and shadow costs, the game changed overnight. It was like the opening sequence of 2001: A Space Odyssey. Given tools, we evolved.

Favorite part of your job: My two favorite parts of my job are seeing world-building develop and brainstorming new features and tools for magicthegathering.com. As magicthegathering.com Site Manager Scott Johns hinted in the final Academy article, we are planning some pretty awesome things for 2008. It’s going to be a huge year for the website, and we’re investigating some new media and widget-y tools and resources for the site. Stay tuned.

Thing you've worked on that you're most proud of: Prior to Lorwyn block, I submitted three "hole" cards that appear in Time Spiral, Planar Chaos, and Future Sight respectively. For those unfamiliar with the hole-filling process, the card development teams often have cards exit files for a variety of reasons. If cards are perceived as too powerful, too lacking in fun, or too "insert reason here," they can get dumped from the file. I was able to get a card in each set in Time Spiral block through this process. It's funny to me that I have a Timmy, Johnny, and Spike card in this series, as well.

My Time Spiral card: Pit Keeper. He's the only hole card that I submitted that was printed as is. I find creating common and uncommon holes to be surprisingly more rewarding than submitting rares. It's challenging and fun to come up with cards that are simple but still have their own story to tell.

Pit Keeper is my Spike card in this three-card suite. When I built him, I had an old Randy Buehler Latest Developments article in mind. In the article, Randy talks about how players can be fooled by Kavu Titan. While you have the option to hold onto Kavu Titan and ultimately get a bigger man later, it is usually correct to play his Grizzly Bears-self early and just begin whacking away with him. I built Pit Keeper along the same lines. Less experienced players probably hold onto him to try to get his effect, while Spikes drop him on turn two in limited and begin carving. If you get him late, that's a bonus!

My Planar Chaos card: Jedit Ojanen of Efrava. If you couldn't infer, Jedit is my Timmy card; Jedit is also my Vorthos card. One of the directions for this hole was to reconcept a popular legend into an alternate universe. I was always puzzled as to why Jedit left his cat warrior brethren to become a common (more accurately uncommon) Robaran cutthroat. Even more puzzling from the creative side was his color related to profession. White-blue seems like a strange color for a mercenary. This seemed like a perfect chance to get a new Jedit. As monstrous as I remembered Jedit being, he seemed pretty flimsy as a seven-mana 5/5. Plus, if he moved to a green card, he could be a fatty.

The card that I submitted was a seven-mana 6/6 trampler that made 2/2 Cat Warrior tokens when it attacked and blocked. In my mind, I imagined Jedit teaming up with the old Melissa Benson art Cat Warriors to lay the smackdown. I mean, if Jedit was fiercest of the cat warriors, it seemed logical to me that they should ride shotgun with him on attack and defense. Development shaved off a mana, a power, and a toughness, which separated him a little bit from his old school self. As Aaron Forsythe would say, "we know how to make a creature!"

In the set's Pact cycle (Pact of the Titan, Slaughter Pact, Pact of Negation, Summoner's Pact and Intervention Pact), I initially had a card that was the red part of the cycle. It was a "free" Overmaster that cost

on your next turn. I'm a sucker for "build-a-cantrip" cards like Overmaster, Quicken, and Scout's Warning. I initially thought, "what could be cooler than a free 'my next spell can't be countered'"? My gut told me the card might be broken, but I thought "what the hell, let's see if Development can break it." The way it was broken was pretty hilarious though. I imagined it would be broken fairly, if such a thing was true.

In the end, the man that broke the card was Djinn Illuminatus. I forget who built the deck, but there was monstrosity in the FFL where the goal was to turbo out a Djinn, use the OverPact to draw your library, pitch Simian Spirit Guides to get some mana, use that mana to burn all of your rituals, and finally use those rituals to cast things with Storm that would rip your opponent apart. It was pretty foul, and it is why we have the FFL. After my Pact broke, I began hunting for my next "Johnny" card as replacement.

That card turned out to be Glittering Wish. I submitted Izzet Wish as a wink that we might someday go back to Ravnica. I'm one of the biggest Ravnica enthusiasts on the planet. The card was something like this-

^ instant- Wish for a blue instant or red sorcery. I thought it would clever to hint that we could go back to Ravnica, and at the same time, make a solid Johnny piece. Mike Turian, the lead developer of Future Sight, liked the idea of doing a new wish, but thought this card would set up the unrealistic expectation of us printing ten wishes in a new block. Glittering Wish also gave us some flexibility over if and where the card could reappear. Costing the card was a pain in the butt, though. Finding the right mana cost and colors for a multi-wish was a challenge. I won't tell you the number of incarnations this was costed at, but trust me, you're getting a good deal at

In Lorwyn Block, I have a pretty solid chunk of cards, but these three will always be special to me. 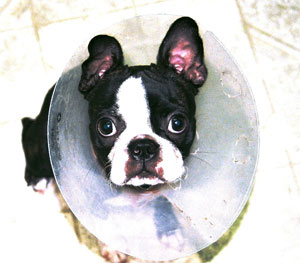 Something the readers don't know about you: In addition to my lovely wife, Mandee, the Theis family includes my Boston Terrier, Elwood. Enough people in my life have called me Joliet Jake that I thought I might as well spring for my Blues Brothers counterpart. I always wanted to own a Boston Terrier similar to Johnny Quest’s bulldog Bandit. You see, a short-nosed, big-hearted dog is a handy companion if you ever plan to battle a yeti or solve a mystery. The picture to the right is a portrait of my buddy with his sad-sack, vet-required cone. The poor guy had to wear it for almost a week after surgery. After a few days, he kind of became a dog-cyborg. He learned to scoop up food with the cone in bulldozer fashion, and after using it as a Ben-Hur weapon on my wife’s calf, it was removed.