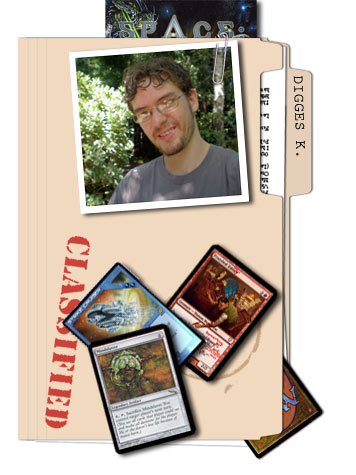 Job title and duties: Magic editor and editor of magicthegathering.com. I work on editing card sets, Comp. Rules, packaging and inserts, and daily web site content. I also travel to Pro Tours to edit coverage. I enjoy trying to explain to (non-Magic-playing) people that my company flies me all over the world to edit event coverage for a card game—and that this makes sense somehow, I swear.

Began working at Wizards: I started coverage editing as a contractor in July 2006 and became a full-time editor in November 2006.

Previous job: Copyeditor in Illinois—at, as we've mentioned on the site, the same publishing company where Brady Dommermuth worked some time ago. My other weird connection: I narrowly avoided taking calculus from long-time R&D member William Jockusch's mother.

How you got your job here: I mentioned in my Featured Writer bio at StarCityGames.com that I was an editor, and Scott Johns and Greg Collins tapped me to edit coverage as a contractor. Once I was in, events unfolded with alarming rapidity; I was offered a part-time contract job editing the web site just after my first coverage gig, asked to come out and interview for a full-time position before the part-time job had actually started, and on the plane to Renton three weeks after that.

Magic accomplishments prior to working here: Besides the aforementioned Featured Writer status at StarCityGames.com (and fake rivalry with Talen Lee), I made Top 4 at the 2006 Two-Headed Giant Limited State Championships in Illinois as part of team Two to the Dome with my friend David Strutz.

Expansions or projects you've worked on: I did a little bit of work on Future Sight as part of my editing tests (the reminder text on Seht's Tiger? All me). Since then, I've worked on two Oracle / Comprehensive Rules updates, cards and packaging for Tenth Edition and Lorwyn, the Lorwyn Pro Player cards, and, of course, the web site. I'm also the lead editor for Morningtide.

Favorite part of your job: Sitting in the room I've wanted to work in since I was 15, working with people I respect and admire (and occasionally getting to tell them they're wrong anyway), and getting up to my elbows in the nuts and bolts of a game I absolutely love.

Least favorite part of your job: Deadlines! When things on the two sides of my job go hot at once—especially when I'm also heading out of town for that third part of my job—I end up wishing I'd taken more juggling classes.

Thing you've worked on that you're most proud of: I'm immensely pleased with the web site's "What If?" Week, especially my article on the fictional "Space: The Convergence." As an alternate history buff, I dove into that week's theme, coordinating the writers' topics and helping generate the alternate reality Ask Wizards and Card of the Day entries. I was glued to the forums that whole week, and I'm really happy with how it turned out and how it was received.

Also, I came up with the current Oracle wording for North Star, which didn't work right before. And I know it was bugging you.

Other games you currently enjoy playing: Uh... they're all Wizards games, actually. No, really! I'm in a D20 Modern campaign and a D&D play-by-post, both of which I'm enjoying thoroughly. Other than that, it's mostly Magic, in weekly drafts with some of the other fresh faces who, after a tough day working on Magic, can't wait to relax and play some Magic.

Favorite Magic card(s): Probably Mindslaver. I had been on a long hiatus from the game, and while I never stopped considering myself a Magic player, I had nobody to play with. I was following Mirrodin previews closely, planning to get back in the game, when I saw Mindslaver. After so many years and so many cards, how could a little piece of cardstock still shock and delight me so? I then went on to win a Prerelease flight with it, and I was hooked on the game all over again. I mean, you get to tap your opponent's cards! How cool is that?

Something the readers don't know about you: I have a background in sketch comedy and independent film, and the Ubiquitous They—a group I co-founded at the University of Puget Sound in Tacoma in 2003—still performs regularly. I also have an entry on the Internet Movie Database.