Magic of the Flesh

the risk of starting out this week's column with a thud, I want to put a spotlight on a subject that arose from my column last week, “I Freeze, Therefore I Am.” In the last week I have learned through email from a handful of folks that the word Eskimo is not received kindly by those to which it refers. In fact, there is no one people who are actually Eskimo. The term is used to lump together all sorts of northern peoples, like Inuit, Aleutians, Yupic, Sug'Piak, and others. It's a term used only by people outside of these groups, and its use is frowned upon by them. Well, I learn something every day. And today, so do you. Given this enlightenment, I am going to have my editor change the text in “I Freeze, Therefore I Am.” to something that will not ruffle the folks slinging Magic cards way up north. Now on with the show.

The scroll was wrinkled and damp from the sweat on Gjorik's fidgeting, flustered hands. He read it and reread it, switching rooms and seating positions as if the change in angle or lighting would alter the runes long since ingrained in the parchment. The spell was as he had always known it, the way he had cast it countless times before. But this time he knew that it was not enough. It needed an infusion of power, but from where? 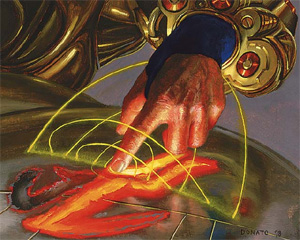 The root of this spell's magic is in the writing. Transcribing the runes from parchment to the ground was the first act in the spell's play to the gods. Great artistry and passion in the transfer catches the mercurial eye of the immortals, but it is the presentation of the written that holds their attention and wins their favor in the form of magic granted. Strong lines, confident arcs, symbols not just copied but interpreted with force and flair. These things coaxed magic up from the gods of the Core more than anything else. And yet today, Gjorik could not seem to imagine lines and arcs that could possibly bring him the amount of heat that he needed.

Gjorik paced the frozen halls of his Ronom hermitage. He felt as though he'd melt a groove in the ice where his fervid footsteps traced over each other time and again. He consciously avoided pacing in one line—not to avoid wearing a rut in the ice, but to try and step out of ruts in his thinking.

Occasionally, his concentration would be broken by a stray thought from Jabo, his homunculine familiar. Jabo knows, or rather feels, when Gjorik does not want any interruptions, particularly the kind that pop right into the brain. But heightened emotion or distress carry great telepathic weight and are difficult to restrain. The silence is often broken when Jabo slips and bumps his head, or snares a wily ice mole, or catches a glimpse of a Valkyrie overhead. Today, Gjorik was not interested in Jabo's excitement. He had a mind to reprimand the homunculus, but stopped himself mid-thought. It was at that moment, with half his mind on the spell conundrum, and half on his excited familiar, that he found his answer. While anger was saying “Jabo, get out of my head,” inspiration told him that the opposite might be the answer. He quickly sent a mental summons to his little friend.

Jabo prepared the ground for magical script while Gjorik shaved his head with a mage-blade. Once the ground, and Gjorik's pate, were ready, the wizard and his familiar took time to internalize the script upon the scroll. Gjorik sat and Jabo climbed up onto his back. They each held a stylus in hand. Jabo, additionally, held a jar of ink with his tail as he gripped Gjorik's collar with his off-hand. 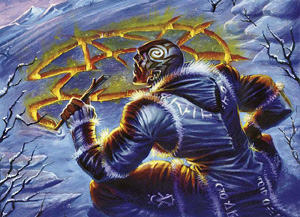 Gjorik concentrated on his link to Jabo's mind and body. Their actions were one. As Gjorik began scrawling the ancient runes into the cold earth, Jabo matched his motions, scrawling in ink upon Gjorik's head. He could feel the pause in the place of the gods. This chirographic duet had drawn the attention of many, and held it. When the final flourishes were made, and Gjorik placed his mind and soul in the hands of the Gods of the Core, he felt a rush of heat and mana that he could hardly contain. The gift did not come to him through the land. It burned a path straight to his mind, tracing a path in through the writing upon his head. Like veins they coursed with Dominaria's sorcerous blood. Jabo squawked and broke free of him, scurrying off to the comforts of a cold corner. Gjorik held firm, his head pounding to the beat of Dominaria's heart.

All possibility was open to him.

So what happens to Gjorik? I don't know. It's really not important. What is important is how Gjorik magnified his power through the connection of Magic and the flesh. This is no new phenomenon. Power is seized through body enhancement from one corner of the multiverse to the other. Take a look at these examples of Magic ink in action:

A few years ago, I got an email from a fella in Russia (if I remember correctly.) He sent me a photo of his shoulder tattoo of Goblin Piledriver. I was amazed at his love and commitment to Magic and to my artwork. I was flattered and jazzed all at once. Somehow, he had taken a horizontal, color composition and did it up in spectacular fashion vertically and in black ink only. Awesome!

If you have some Magic tatts, and you want to show them off to the world, click to download this release form and then fill it out completely. Then you can use this email link to send in your attachments (pictures and the completed release form). The release form requires a signature, so you can either scan in the completed form and attach it or just take a picture of it with your camera and just attach that. We'll keep the email address open for now to see how long we keep getting quality submissions. One thing I can't stress enough, if you don't include the fully completed release form in the email we simply can't show the pictures, so make sure you've got everything when you hit send. (Also, the email link will automatically generate a subject line - please leave that subject line alone as that's what we'll be using to separate these out from the inevitable spam.) We'll share the best with the world, so keep watching!