i everyone! Thanks for taking the time out of your busy schedules to come read about Magic Online. This month is a pretty special one for us here at Wizards, as Magic Online turns ten years old..

We've got some great events planned for you all to celebrate our 10th anniversary, but first I wanted to say thank you to all our fans throughout the years, without whom of course none of this would be possible. Who knew that when we launched Magic Online all those years ago, we would be standing here 10 years later. 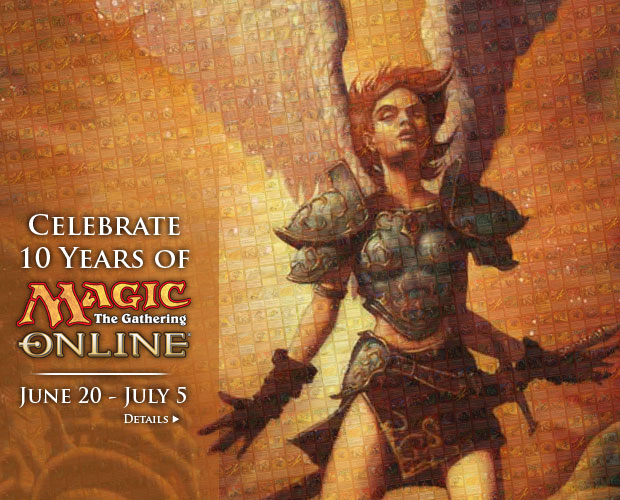 Clearly Magic Online mostly goes as Magic itself goes, which actually makes right now one of the most exciting times ever to be involved with the game. Magic is bigger and more popular than it's ever been, and Magic Online is as well. We have a couple very exciting things coming up—some pretty soon—that you will hear more about later on.

We recognize that as great an experience as Magic Online is overall, the road behind has been rocky in spots. Running games as a service online means that you are literally never "done" and constantly need to be improving. We hope some of the things you will see throughout the rest of this year on Magic Online reinforce this sentiment, and I hope you will continue to give us constructive feedback so we can continue to improve things. Feel free to post thoughts in the Magic Online forums or to hop on Twitter, where I can be found under @mtgonline. Though I can't reply to every tweet or post personally, I do read every single one of them.

In appreciation for all the players who have stuck with us during the good times and the bad, and who help make our community so awesome, each player who has logged in at least once during the 2012 year-to-date had some digital goodies added to his or her Magic Online account during today's downtime. The exact items are based on the year you created your account, so check out the table below to see what you've received:

This is just a small way of saying thanks to our loyal fans and hoping you will stick around for another ten years.

I'm going to hand it over to Chris Kiritz, who works on the Magic Online Business Team, to explain more of the stuff we have in store in the immediate future.

Thanks again for a great ten years, and may the shuffler treat you all well. ;)

A fan favorite, Spellslinging returns to Magic Online for the 10th Anniversary Celebration. Players will be able to put their favorite decks to the test as they battle Wizards of the Coast employees during the following Spellslinging sessions:

During each of these sessions, Wizards of the Coast employees will be hosting games of various formats in the Anything Goes room. To participate, you just need join an open game with a deck that is legal in the format the Spellslinger is playing and finish the game. All Spellslinging challengers will receive one non-foil alternate art Kitchen Finks promo card. If you manage to defeat your Wizards opponent, you will receive a premium foil version of the card instead. 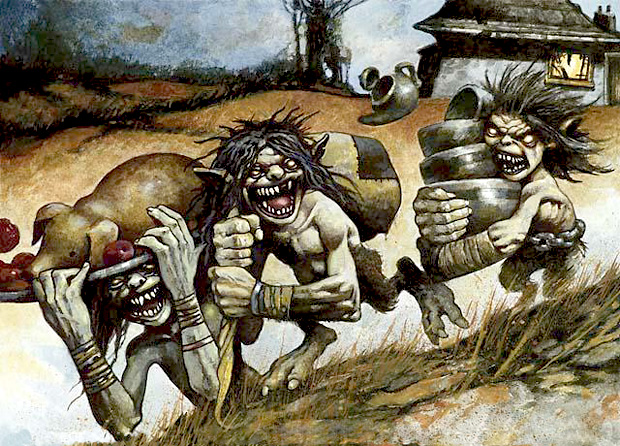 In a change from previous Spellslinging events, please note that only the first Spellslinging game you play during each session will count toward earning the promo Kitchen Finks. You will not get multiple cards for playing multiple times, so please be respectful of others and only join one Spellslinging game. Promo cards earned from Spellslinging matches will be distributed within five business days of the Spellslinging session.

The chat will take place in the Anything Goes room (conveniently the same place that we will have Spellslinging) and is open to anyone who wants to participate. We hope you stop by and hang out.

Travel the Multiverse and battle across a multitude of worlds with Planechase and Planechase (2012 Edition). This exciting take on multiplayer Magic adds planar cards—powerful cards representing famous locations and powerful phenomenon—to your arsenal, each with its own unique effect on the game.

In Magic Online, Planechase will be its own format and will be available for games with two to six players. When building a Planechase deck, you will need to build a 60+ card deck in your main deck (Planechase uses the Legacy card pool) and a 10+ card planar deck in your sideboard. Each planar deck is singleton (you can only have one copy of any planar card in your planar deck) and you can include a maximum of two phenomenon cards.

Planechase game packs will be available for purchase from the Magic Online Store on June 29.

Fans of the Magic Online Cube will be happy to learn that the Cube will return in mid-July! Featuring fifty updated cards, this version of the Cube includes cards from Avacyn Restored and will alter some draft strategies. Stay tuned for more information when the events start and what the prizes will be.

We will also be introducing a New Player Ticket with the Magic 2013 Core Set. These special tickets will only be included in the New Account Starter Kit and will give new players a way to sample tournament play in events with other new players. An excellent way to learn the tournament interface, new players will be able get their feet wet in a low-pressure environment and hopefully be able to sample a little more of what Magic Online has to offer without being intimidated, either by the interface or by the competition.

We are hard at work with the new Magic Online UI. We have been running our invitation-only beta for several months now and have been gathering a lot of user feedback and making changes accordingly. We are continuing to iterate on the design and are very pleased with where we are heading.

As we have mentioned before, we will be running an open beta alongside the current client so players can check out our progress and give us feedback before we transition everyone to the new UI. The open beta will be connected to the live production environment and open to everyone who has a Magic Online account, subject to some terms and conditions. This means there will be no hoops to jump through to participate—other than downloading the new game client, which now takes just a few minutes on most Internet connections—and lets everyone who wants to check out the new features do so. The best part is that if you like what you see in the open beta, you don't have to wait to start using it. Conversely, if you want to wait before switching, you can go back to the current client until and just check back periodically after we change things.

Players will also have many opportunities to submit feedback and let us know what they like, what they don't like, and what might be missing from the UI, and help us shape the future of Magic Online. We will review all the feedback and use it to further refine our design or prioritize development.

Finally, I just want to say thanks to all of you for being a part of the greatest game community out there. Your passion is what drives Magic Online's success and I am honored to be part of it. As we move forward, I want to reinforce the fact that we want and need your feedback to improve, and if you share your thoughts and opinions you can help drive what we will be doing in the future.

Happy 10th Anniversary and have fun!