I might be a new face bringing you these articles, but I'm no stranger to Magic Online. My name is David McDarby. I've been passed the Magic Online product manager mantle, and it's an honor helping guide Magic Online and its awesome team into the future.

I've been playing Magic for 12 years, have worked at Wizards for about half of that time, have been given the opportunity to make some spotlight cubes (Living the Dream Cube and Chromatic Cube), and have joined a few design teams (Commander (2019 Edition) as well as some exciting upcoming ones), and generally have done everything, including customer service, judging, design, content creating, cosplaying, event managing, competing, commentating, and now product managing, all for Magic. I've had a lot of help and been given a lot of opportunities along the way, so thank you to all those people who believed in me, and I hope to be able to help instill my passion for Magic to all of you reading this. Magic, and more importantly the people I've met through it, have done a lot of good for me, and I hope it does the same for you!

I can think of no better set for me to join you all, as I've been playing Dungeons & Dragons for almost two decades, with one of my favorite early characters being Vilmamilmamir, the Lawful Evil Beguiler who may or may not have betrayed his party when he met them, in the middle of the campaign, and during the final battle with the Big Bad Evil Guy, but who's keeping track? I hope to help you through going on your very own adventures on Magic Online, and this time for sure, you can trust me.

Magic Online will have a scheduled downtime starting around Wednesday, July 7, at 9 a.m. PT to implement the set onto the client. We'll be down for a couple of hours, but once we're back online, Treasure Chests will have new cards, Bag of Holding will immediately be legal in Standard, Modern Horizons 2 and Strixhaven Limited Leagues will end, Constructed Leagues will close and begin anew, and everything else associated with Adventures in the Forgotten Realms will be implemented.

Dungeons & Dragons brings many things to Magic through Adventures in the Forgotten Realms, but the very first thing it brings is labeled right on the tin: dungeons! On Magic Online, we've got all three for the intrepid explorer.

Say you've enlisted the help of your old buddy Acererak the Archlich. Once you cast him, you'll be prompted with this screen where you must make a choice and choose which dungeon to venture into: 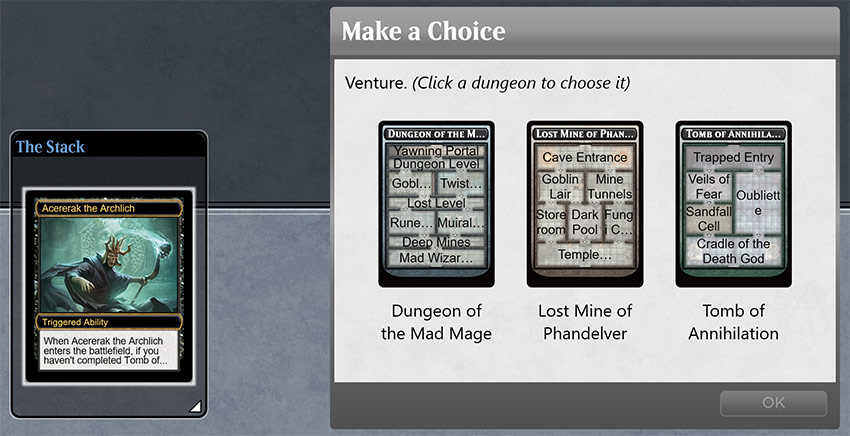 To make an investigation check, you can always zoom into one of these dungeons by hovering over it and pressing "Q" or the middle mouse button, or simply by having the card preview window open. 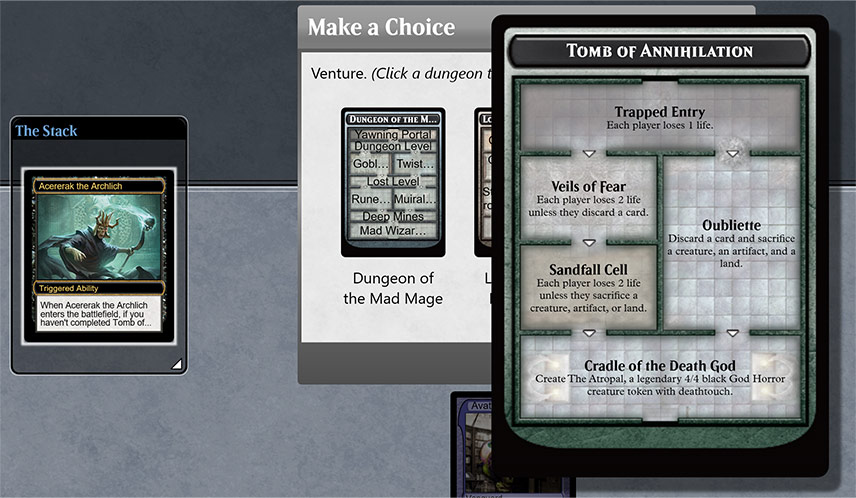 When a player is "in" a dungeon, you'll then see that dungeon on the battlefield, the same way you would see a token if a player was the monarch or if they had the city's blessing.

In fact, at any time in any game, you can right click the battlefield and find "view dungeon information" in the context menu to view all three dungeons and see if a player has completed any.

In this picture, WotC_DavidM has completed Tomb of Annihilation thanks to his good pal Acererak and is now currently in the Lost Mine of Phandelver in the Goblin Lair, while DEC_Dragon hasn't completed a single dungeon! Good thing their name isn't DEC_Dungeon

Take a Chance, Roll the Dice

Another thing Adventures in the Forgotten Realms brings to Magic is rolling a d20! While Unglued may have brought six-sided dice to Magic, we now have them in black-bordered Magic with fourteen additional sides!

Any time a card asks you to roll a d20, it will be reported in the game log. You can always open the game log by clicking the chat bubble in the lower-left side of the client when you're in the duel scene to investigate what was rolled behind the scenes. 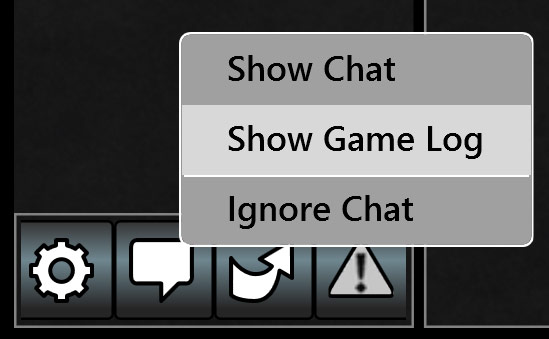 In addition, the game log will report any modifiers that would be granted to a roll and then report the final results: 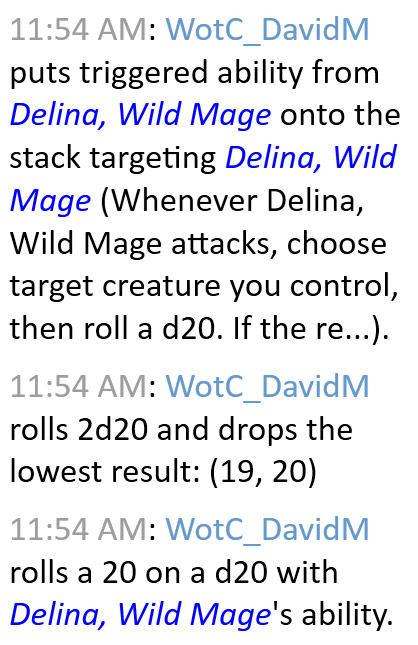 Why do I even need modifiers when I'm this good? 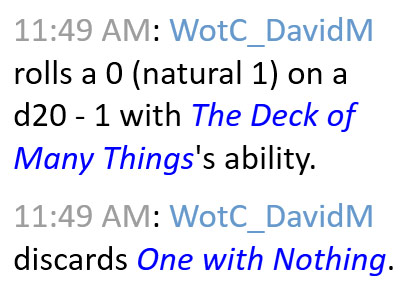 Starting July 14 for a week, we are introducing a new way to play Magic on Magic Online: Draft Gauntlet!

For those familiar with previous iterations of gauntlets on Magic Online, they are a way to play with preconstructed decks that we provide; no deck building necessary! The twist here is that as opposed to being given a deck randomly, you now get to exercise agency and choose one! For the first run of the new and improved Draft Gauntlet, your first "and only" deck-building decision will be choosing a class!

That's right, much like how choosing a class is one of the first major decisions you make in D&D, that very same decision will be made in Magic Online! Once you have made your single pick and drafted your chosen class, you'll be given a decklist built around the Class card from Adventures in the Forgotten Realms. You can always right-click each deck for a short description of that deck's strategy and your character's backstory. For example: if you choose to be a charismatic arcane caster who doesn't have to memorize specific spells each morning, you'll be presented with the sorcerer's decklist! 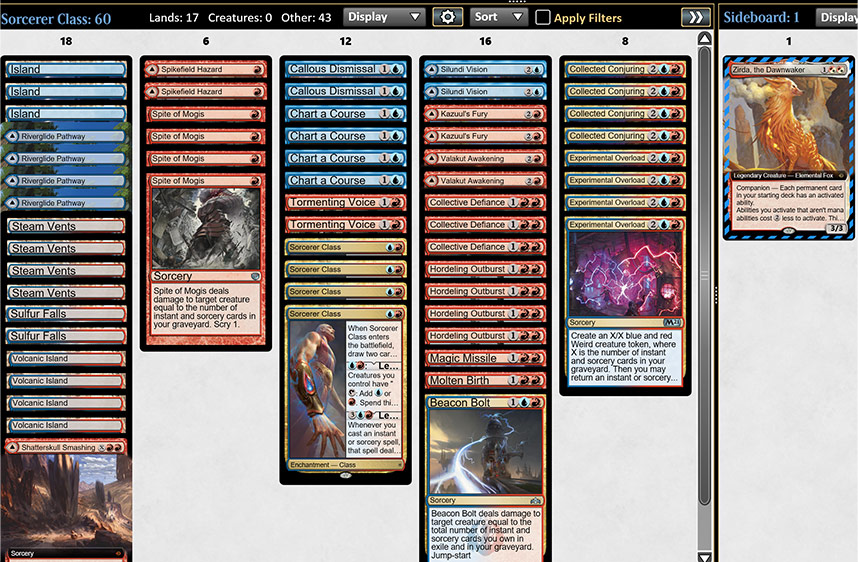 You'll then do battle with other like-minded adventurers wielding any of these twelve core D&D classes in a league-style format. All twelve decklists and full event information will be published next Wednesday when the event goes live with a link to the decklists in the client. This is one of the ways we can leverage Magic Online's larger card pool with our newest Standard sets. We're excited to have other future events using this new Draft Gauntlet technology, but for now, we are blending D&D and Magic even further, allowing you to simply choose your class and immediately enter combat!

Adventures in the Forgotten Realms Avatars

As is tradition with each new set, we are rolling up some new characters to be avatars for you to represent.

First up, we have The Adventuring Party. This tradeable avatar is included in a New Account Starter Kit or in the Deck Builder's Essentials item, which will be available in the Magic Online Store! 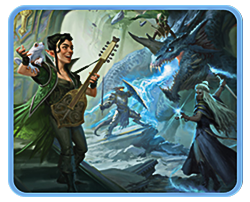 Then we have the three prestige avatars. The prestige avatars for this set will be using the now-familiar system: you earn five points for each Competitive Trophy and one point for every Friendly Trophy. At the end of the Adventures in the Forgotten Realms season, if you can scrounge together at least five points, you'll receive the Ellywick Tumblestrum avatar. If you earn twenty or more points, you will receive the rare Zariel, Archduke of Avernus avatar. And finally, if you have accumulated 40 or more points, you will earn the mythic rare Grand Master of Flowers avatar! Who is definitely not a Dragon, don't worry about it.

But that's not all! Seven more beings wish to join your party! You can find them in Treasure Chests, and these avatars are tradeable. Notably, you can open a Treasure Chest avatar in your Treasure Chest. As they say, the real treasures were the Treasure Chests we opened along the way.

The Treasure Chest avatars for this set are:

In addition to this rough outline, expect even more exciting Cube news soon! Yes, this is an announcement of an announcement, so you'll get no surprise round from us.

Adventures in the Forgotten Realmsredemption will begin on August 11.

The availability guarantee forAdventures in the Forgotten Realmsredemption will expire on October 27. After that, redemption will only be available as supplies last.

Adventures in the Forgotten Realmsredemption will end entirely on December 1, 2021.

There has been a lot of amazing content released this year. We've been putting our attention into Magic'smain set releases, and as many have noted, this has delayed our Commander cards and sets. Magic Online is extremely passionate about Commander and our Commander audience, and we're working hard to get these cards into the system as soon as possible.

And that's all the news that's fit for print for Magic Online. We plan on continuing to bring you awesome Standard sets, new ways to play Magic on Magic Online, and more cubes than you can shake a greatsword at. As always, we welcome your feedback on Twitter, Reddit, etc. We read your feedback to shape this game we all know and love, so thank you all for that. And we hope you have as much fun playing Magic with Adventures in the Forgotten Realms as we've had making it.

So, until next time, what's your armor class again?