Tonight begins the Team Draft Super League Semifinal! Watch teams ChannelFireball and Dem Boyz battle it out in the Top 4! Team roster is below:

Tomorrow Flashback Favorites: Triple Odyssey begins! You will be able to enter this event at 10 a.m. PT on August 9 and the event will run through August 16. Please note that the following cards will not be in the booster collation: Charmed Pendant, Holistic Wisdom, and Painbringer.

More details about Flashback Favorites can be found here.

More details about Throwback Standard Gauntlets can be found here.

The August MOPR period runs from July 26 to August 30. On August 31, the MOPR changes announced last week will be implemented. Here is this month’s promo card: 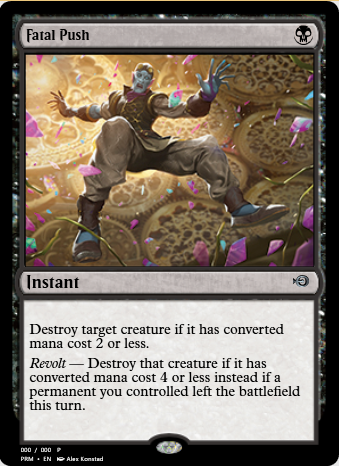 Yes, thats right! Fatal Push is the August promo for BOTH the Event and Store!

Attention all Pro Tour hopefuls: A Pro Tour Qualifier (PTQ) is approaching! We hope to see you in the PTQ Finals on Saturday, August 12 at 9 a.m. PT. There is no need to qualify through a Preliminary for Constructed, simply join this event with 30 Event Tickets, 300 Play Points or a spare Blue Constructed PTQ Finals Entry Token!

Attention all Pro Tour hopefuls: A Pro Tour Qualifier (PTQ) is approaching! We hope to see you in the PTQ Finals on Sunday, August 13 at 7 a.m. PT. Qualify for this event by earning a PTQ Entry Token in a Preliminary.

Events begin every Saturday at 8:00 a.m. PT, and run through Sunday. Check out this page for further event details as well as the weekend schedule.

Vintage | With Solemnity in play, you are still prompted to pay one mana for cards with Cumulative Upkeep that have zero Age counters.

Collection | A warning message is missing when adding cards that are in a deck in a League to a new Trade Binder.

Standard | Diregraf Colossus will in rare cases reset the game.

Duel Scene | If a creature is blocked by two creatures with combined toughness equal to the blocked creature’s power, you are unable to divide combat damage.

Standard | Sunscourge Champion will cause you to lose life if it has negative power when its trigger resolves.

Limited | If Trueheart Duelist blocks multiple attackers, as well as another creature as part of a group, damage assignment errors can arise.

Multiplayer | If a commander is chosen for Riches in Rags // Riches, no other opponents need to choose a creature.

General | Eventide Mimics trigger even when a card of only one of its colors is cast.

Standard | Vizier of Many Faces keeps its abilities when an opponent controls Overwhelming Splendor.