This Wednesday, March 14, Masters 25 comes to Magic Online! (It will be available after the morning's downtime. This is earlier than we announced previously; see Aaron Forsythe's article here for further explanation.) Draft from a selection of cards representing every tournament-legal Magic set ever printed, then show off the epic synergies you put together. The possible archetypes are practically endless, and there's no shortage of power available.

Well, for now, at least. This run of the Legacy Cube lasts until this Friday, March 16, at 10 a.m. PT. That means you've still got time to jam a few more drafts—and if you haven't tried it out yet, you've still got a chance!

Streamer Showdown is back this Thursday, March 15, at 1 p.m. PT. And this time, the streamers will be drafting Masters 25! Get your very first look at how the set plays out, and see what cards your favorite streamers gravitate toward. You might get to hear some nostalgic stories about cards that were significant to them in the past; you will definitely get to see some wild, creative synergies between old cards and new.

If you've never watched one before, Streamer Showdowns are eight-player events featuring talented streamers from all across the Magic community. Usually, there are two pods (one at 1 p.m., the other at 5 p.m.), but there will only be a 1 p.m. pod this week. Check out the roster of streamers below: 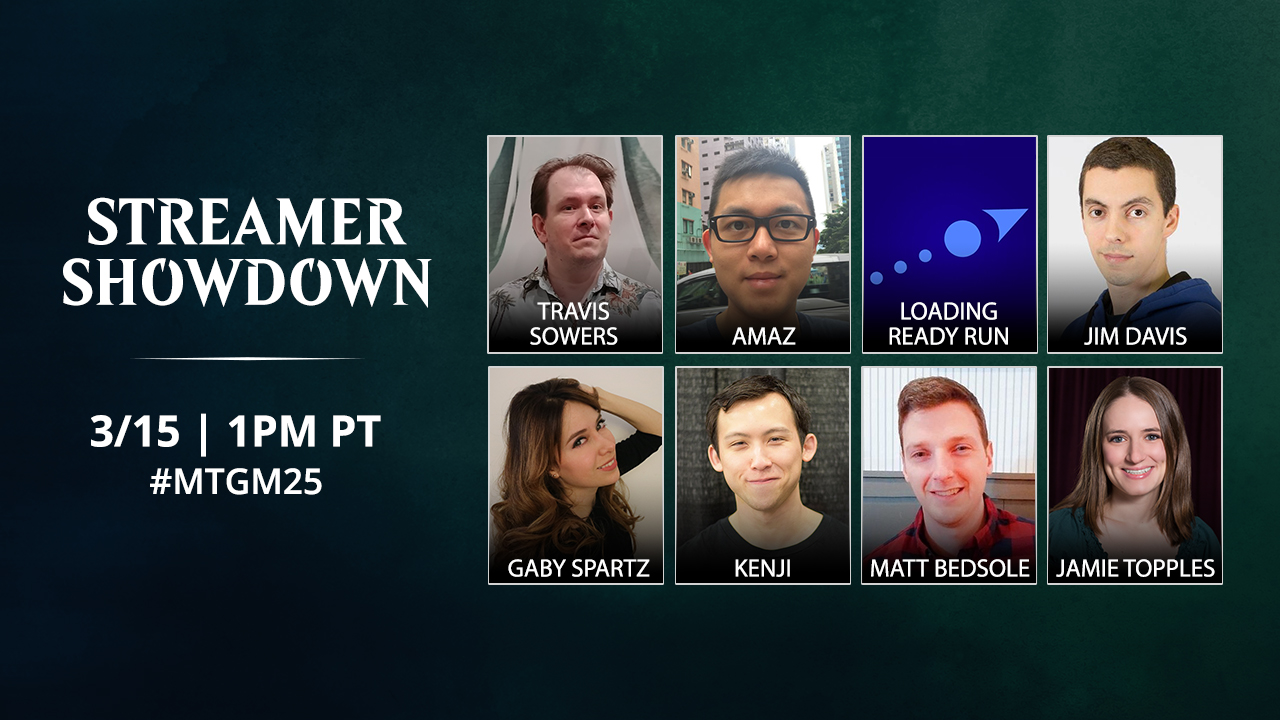 Since last week's Team Modern Super League episode was postponed, this week brings two episodes to make up for it: one tonight, at the usual time, and another tomorrow, also at 5 p.m. PT. Modern is already a deep format with a huge diversity of viable deck options, and the inventive team-based deck rules used by TMSL makes things even less predictable.

TMSL airs Tuesdays (like this one!) at 5 p.m. on twitch.tv/magic. Learn more about Team Modern Super League here, or check out the video below.

A Magic Online Championship Series Monthly Event will take place this Saturday, March 17, starting at 7 a.m. The format will be Rivals of Ixalan-Ixalan Sealed, and players can enter the event with 35 Qualifier Points (QPs). Top finishers qualify for the Playoff Event on May 5 (the format for which will be Modern).

A Pro Tour Qualifier Finals Event will kick off this Sunday, March 18, at 7 a.m. The format will be Rivals of Ixalan-Ixalan Sealed. A red or blue PTQ Finals Entry Token is required to join this event, and the winner will qualify for Pro Tour Dominaria. (Reminder: blue tokens will expire on March 31, so make sure to use yours before then!)

Check out this page for further event details.

General | Teferi, Mage of Zhalfir now correctly gives flash to your creature cards at all times.

General | Copied permanents that have an enter the battlefield effect where a creature type is chosen now correctly function.

General | Cards with protection such as Mirran Crusader now do not mention their protection twice in blue rules text.

Limited | Cards with the clash mechanic such as Lash Out now correctly give the other player the option to choose where the revealed card goes.

Limited | Vampire creature tokens created by Bloodline Keeper do not display that they have lifelink.

Legacy | An issue with Misdirection sometimes causing a game restart has been fixed.

Account | Replays no longer fail to function when a card name was chosen during the game.