At the beginning of the year, I laid out some of what we were looking to accomplish in 2018, so let's look at where we are and what is in store for the rest of the year.

Early in my days on the Magic Online team, I half-jokingly pitched a plan that featured Prereleases on Magic Online before the paper Prerelease. At the time, there were many serious obstacles in the way of making that a reality, from both technical and process standpoints, so that early plan didn't go very far.

Over the past several years, however, we've been chipping away at those obstacles with the intent of releasing sets as early as possible. After streamlining processes, eliminating technical hurdles, and adjusting schedules, and through the combined effort and collaboration of the various Magic teams, however, I am extremely proud that each Standard release this year has had Magic Online events prior to the paper Prerelease, including the launch of Sealed Deck Leagues for both Dominaria and Core Set 2019 the Friday of Prerelease weekend.

Unfortunately, the changes needed to make this happen weren't without cost. The tight timelines we have for our primary releases, including Masters sets, create challenges for releasing cards from ancillary products like Commander, Battlebond, Conspiracy, and more.

The good news is that we are aware that this is a problem. The bad news is that I don't have a timeline or a guarantee on when we'll be able to fix it. The really bad news is that this problem will affect the release of Commander (2018 Edition) cards as well, which likely won't be available until late in the year.

That said, we're refining how we prioritize the cards from those sets, so in the cases where we can't get everything in the timeline we'd prefer, we're at least getting as many of the most important cards as we can. Our goal is to deliver as many cards as we can as close as possible to their paper release, and we'll continue taking steps that get us closer to that goal.

In my State of the Program article, I also reiterated our commitment to delivering a wide variety of play experiences that showcase the depth and variety of Magic Online, and to that end, I think we've made great progress this year.

For Constructed players, we launched Brawl with the release of Dominaria as a fun way to play using the Standard card pool without needing a massive collection of the most powerful cards. For players who like experimenting with new formats before diving in, we're offering a Pauper Gauntlet on August 8 where you'll be able to try out some of the format's most powerful decks. We're continuing to refine 1v1 Commander and have made another big update to the format to find that sweet spot of powerful-but-balanced Magic (check out that update announcement for details).

For Limited players, we saw the launch of the Cube Spotlight series, where players have the chance to explore more esoteric cube experiences, like the inaugural Uncommon Cube, or the upcoming [REDACTED] Cube on August 15 (check MTGO.com next week for the details). We also brought back the popular Battle of the Planes, a Phantom Sealed Deck event that let players choose their favorite plane and battle for dominance.

Finally, I am excited to announce a brand-new format for Magic Online: CHAOS DRAFT! (Yes, it needs to be written in all-caps with an exclamation point, because CHAOS DRAFT!) In each CHAOS DRAFT!, every time a player opens a booster, it will be a totally random booster pulled from Magic Online's history (with some slight curation).

Every booster opened in a CHAOS DRAFT! pod will be different, so you'll need to be able to piece together a winning deck using a vast array of cards and strategies. CHAOS DRAFT! Much like the Battle of the Planes and recent Flashback drafts, CHAOS DRAFT! Leagues will be Phantom, so you can focus entirely on your Draft strategy. The inaugural CHAOS DRAFT! League starts August 22 and will be available for a week, so mark your calendars now. Full event details can be found below.

Product: 3 random phantom boosters
Structure: Draft, then up to 3 matches played at your convenience
Prize Structure:

We've been busy behind the scenes the first half of this year working to deliver internal tools and updates that help us manage Magic Online and our future efforts.

Our big change involves updating how we deliver releases to both eliminate as many downtimes as we can while increasing the rate at which we deploy fixes. For example, in May we had deployments in four of the five weeks, yet only one downtime. In June we had three deployments and no downtimes. For the rest of 2018, we only have five scheduled downtimes on the calendar! For the sake of comparison, here is a look at the number of scheduled downtimes on Magic Online (including our estimate for this year) over the past several years: 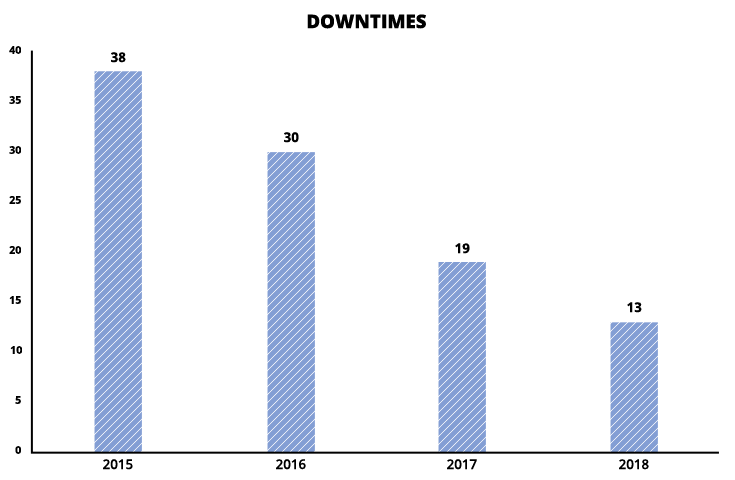 In addition to improving our release process to limit downtimes, we've improved some internal tools to help our Game Support team assist players more quickly. This includes some basic performance improvements, some tweaks to their workflows, and some changes that will allow us to provide reimbursements for mass outages more quickly (a feature that we hope we don't ever get the chance to use).

Finally, we're working on the finishing touches that allow us to manage the banned and restricted lists for Constructed formats without requiring a downtime. This will help us in those times where the B&R announcements don't align with our releases, an occurrence that will be much more common as we have fewer downtimes.

Now that we've reviewed 2018 so far, what's in store for the rest of the year?

We're currently running through some initial designs on a redesign of the Play Lobby with the goal of eliminating confusion and getting players into games more quickly. I'm not sure when we're going to be able to share what we're working on, but I am looking forward to moving away from the heavy spreadsheet feel to something that is a bit more visual.

Beyond the Play Lobby, we're looking at other small gameplay improvements. Earlier this year, we delivered a feature that lets you yield until a specific phase. We're looking to expand some of this functionality to be even more useful. We're also exploring the best way to split the game chat and game log for players who just want to play Magic and not interact with their opponents, while ensuring that players who like the feature can still chat with their buddies easily.

Finally, we're looking to get as many of those missing Battlebond and Commander (2018 Edition) cards into the system as we can. We'll get a batch of cards with Guilds of Ravnica and then another set near the end of the year, just in time for the holidays!

Well, there you have it. 2018 has been a busy year, but we've been very pleased with how it's gone so far, and judging from your activity, you have been too. We look forward to bringing even more variety to your Magic Online experience, and I can't wait to battle you in the CHAOS DRAFT! League!

If you have feedback for how we're doing, let us know at magiconlinefeedback@wizards.com or hit me up on Twitter @ckiritz.

Thanks for a great first half of the year!