Welcome to The Izzet Copy Service, guaranteed to both annoy and delight.

Johnnies and the Johnny-curious! What week Izzet again? Izzet the theme week I think it is? That's right, groaning masses, it's Izzet Week here at magicthegathering.com! With the next two thousand multi-syllabic words, I'll be taking an in-depth look at Snoop Dogg's favourite guild. You'd think that since the Izzet are the undisputed masters of spellcraft and invention, I would pay homage to their creativity by avoiding the painfully obvious Izzet puns. You'd be wrong. (Don't you know how lazy I am?)

Let's talk a little about the Izzet. I'm sure Matt Cavotta is giving you the official story next door, so to be different I thought I'd give you the unofficial, completely made-up story. Led by the dragon wizard Niv-Mizzet (who, if not I'm not mistaken, won a lot of money on Jeopardy!), The Izzet is the clever guild in Ravnica, and as a wise man once said, “It's such a fine line between stupid and clever.”

In Ravnica, The Izzet run the Water Works, the Electric Company, and all four railroads. All of this stuff is powered, more or less, by djinni in a bottle. Rubbed in the appropriate manner, these djinni (and efreeti and weirds) “set free” the energy required to power up the Izzet laboratories, among other things. Not only did they create this infrastructure, but they keep it running. So if your bathroom drains are clogged, call the Izzet. If your television set is on the fritz, call the Izzet. If there's something strange in your neighbourhood, call the Ghostbusters. If you can't get a hold of them, call the Izzet. 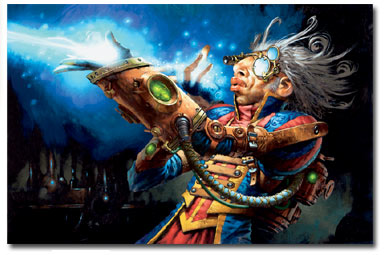 Now, I know what you're thinking, “Maintaining sewers, hooking up Ravnican satellite dishes, busting ghosts and their shadowy councils. All of this sounds pretty clever to me, Chris, where does the stupid come in?”

With their totally impractical clothing! Just look at them! If their Guildmage is any indication, the Izzet do all of this sewer-inventing, djinni-bottling, and elemental-crossbreeding in a costume (nay, a get-up) that is half Megaman, half Sgt. Peppers Lonely Hearts Club Band. Casual Fridays at the Izzet Lab is like Carnival in Rio de Janeiro.

And I'm still trying to figure out what the vacuum-cleaner attached to their arm is for.

One of the cards that has generated more buzz than a nest of bees is the Izzet Guildmage. Much of it is based on the fact that Izzet Guildmage forms an infinite damage combo with Lava Spike and a spliced on Desperate Ritual. If you aren't familiar with the combo, I refer you to John Carter's Saturday School from January 28th.

That said, I'm going to do something completely different.

I find it neat when two completely unrelated blocks end up having a lot of synergy. With mechanics like Threshold and Flashback, Odyssey Block was all about the graveyard. However, it wasn't until Ravnica brought us the Golgari guild's Dredge mechanic that these underrepresented Odyssey Block mechanics finally became the powerhouses that we all new they could be.

Okay, I'm just kidding. Those mechanics were all really good on their own, and better when combined. One Odyssey block mechanic that wasn't particularly good (or, at least, tournament-worthy) was the set of “punisher” spells. These spells generally offered an effect normally unavailable to Red, but allowed your opponent the option of taking damage instead. Cards like the alliterative Skullscorch, Book Burning, and Browbeat.

The “punisher” spells are much better when you can play them repeatedly. The decisions get tougher the more they have to be made. You can only take the damage so many times. The one that appeals to me the most is Book Burning. In my mind, it allows you do the thing that is the most out of flavour for Red: mill your opponent's library. Hey! Isn't that supposed to be a Dimir thing? Those crazy gizmometers! Not only do they like to copy their own spells, they like to copy another guild's entire modus operandi!

I bet Niv-Mizzet only got good grades because he was copying off Szadek during finals.

Since I write my articles nearly two months in advance (the Christmas ham I just ate was delicious, by the way), and Guildpact was only released on Magic Online a couple days ago, I knew I'd have to do a little bit of improvisation (and perhaps some miming) in order to test the decks for this week. Without the Izzet Guildmage, I didn't have to restrict myself to two-mana spells, and without Djinn Illuminatus it made more sense to stray further from a mono-coloured deck. Here's the version I've been playing online. It's a little Bluer, so mind your ears!

Dragon Mage is mostly there for fun, but he also happens to help out with the milling strategy (as well as the attacking-for-five-every-turn strategy). It also happens to be the original (and only other) dragon wizard, so Niv-Mizzet, if dragons wore shoes, you'd have some big ones to fill. You might also notice that those two make a heckuva pair. I'll keep that in mind for the Onslaught-Ravnica Team-Up issue.

Some Moonfolk'll never lose a toe, and then again …

Sure they may run the utilities and the railroads, but don't think for a second that the Izzet have a monopoly on spell-copying. No sir or madam!

A few weeks ago, I detailed a complete blowout loss I suffered playing Online Classic. The short version is that I played a turn 2 Sakura-Tribe Elder and lost the following turn to a 26/26 trampling Sutured Ghoul. I'll be honest, it is not particularly fun to get creamed by a tournament-worthy powerhouse whose previous Extended incarnation resulted in card bannings (Hermit Druid, Entomb). Don't take this as sour grapes, however. The very next game I lost on turn 5 to a 25/25 flyer.

And I loved it.

My opponent was Fire_Head. The flyer was Uyo, Silent Prophet. The reason he was 25/25 was because he'd been the target of Inner Calm, Outer Strength, which had been copied twice. Inner Calm, Outer Strength counts cards in hand upon resolution, so although there were only three cards in hand at the time it was played, after it had been copied twice by Uyo, there were seven (the three original cards, plus the four returned lands). +7/+7 times three equals a very dead me.

Combining Uyo with the “wisdom” spells from Saviors of Kamigawa was a brilliant idea. So I decided to copy it. Replicate it, as it were. Being Green, Inner Calm, Outer Strength doesn't really fit into the Izzet theme, but Spiraling Embers sure does. Combined with our favourite Fork-ing Moonfolk, that's one small step for man, one giant ball of fire to the noggin for mankind!

But what about Guildpact? Of all the Izzet spells, the one that screams out to be played multiple times in a single turn is a spell that doesn't have Replicate: Cerebral Vortex. Provided you play it on your opponent's turn and the only other card drawn that turn was during their draw step, Cerebral Vortex will hit them for three damage. The second copy will do five. The third, seven. If you attacked the previous turn with Uyo, that would put your opponent at one life. That's what some of us (okay, just me) call Shock Range. Or Ember Shot Range.

It doesn't come up often, but if you want to respond to your own spells, you will have to keep priority. To do this, hold down the Ctrl key as you play your spell. This will give you an opportunity to use Uyo's ability to copy the spell while it's on the stack.

I learned this the hard way.

(Note: This only works if you're playing on Magic Online. Around the kitchen table, holding down the Ctrl key will do nothing but elicit strange looks from your opponents.)

Throughout history, Red and Blue have had cards that allow you to take extra turns. Final Fortune and Time Walk are two of the more famous examples. From this shared background, it makes sense that one of the Red/Blue multicolour cards from Guildpact is Stitch in Time. It combines Blue's love of broken effects with Red's Janet Gretzky-esque love of gambling. Just kidding, Canadian hockey royalty!

(As a side note: With their outrageously flamboyant fashions, and their Stitches in Time, I think the water-systems managers among the Izzet are spending a little too much time around the (don't hurt me) sewers.)

When it comes to assembling a Stitch in Time deck, the natural combo is with legendary (and Legendary) Thumb of Krark. In fact, I think it's against the law to use Stitch in Time in a deck without Krark's Thumb. After throwing those into the deck, I made like Captain Renault and rounded up the usual suspects: Mana Clash, Squee's Revenge, and Fiery Gambit. Yeah, yeah, nothing we haven't seen before. Just a copy of a copy of a copy of a deck. This goes against everything The Izzet stands for! Where's the creativity, the freshness, the interesting new twist?

I hope you brought a roll of quarters.

3 Eye of the Storm

If a Stitch in Time saves nine, just think of all the stitches you'll save when it's “imprinted” on Eye of the Storm! Dragons are known hoarders, so it wouldn't surprise me if there was a room in Nivix full of all these saved stitches. What's that? “A stitch in time saves nine” is just an expression?

The outlook for this deck was pretty bleak, after I got absolutely walloped in my first half-dozen test games. The deck really needs Eye of the Storm. And Krark's Thumb. And Fiery Gambit. In my experience, Mana Clash is rarely better than Flame Rift (and often worse, even with Krark's Thumb), which leaves Fiery Gambit as the deck's only halfway reliable path to victory. And what a path to victory it is! In Magic, there's not much that's cooler than drawing nine cards and untapping all your lands … when you have an Eye of the Storm in play! That's a handful of new spells and the mana to cast them. The last game I played with this deck, I was flipping coins for a half an hour. If that's your idea of fun, I invite you to try this one out. You'll positively flip!

Until next time, have fun copying!