hen you work on a game that's been around for twenty years, there aren't many opportunities to be a part of a true historic moment. Grand Prix Las Vegas and its record-setting attendance as the largest trading card game tournament provided just that last weekend. On behalf of all of the people at Wizards of the Coast, I want to thank the Magic community for their participation as players, judges, event staff, volunteers, and those at home watching it all unfold on DailyMTG.com, Twitch.tv, and Twitter. You all made this an experience we'll never forget. 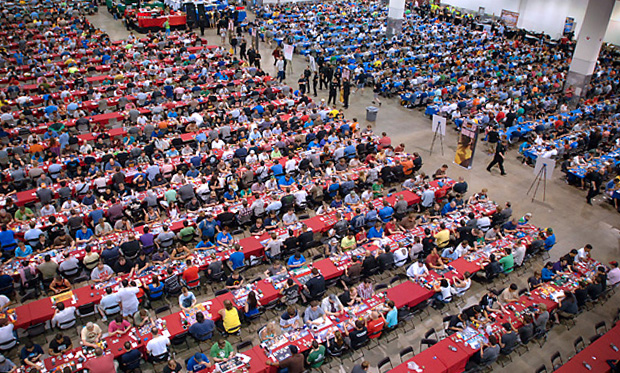 Holding a tournament with 4,492 players is unlike anything Magic has seen before. We were in uncharted territory when it comes to tournament operation. In the weeks leading up to the Grand Prix, every day seemed to present new challenges and Tim Shields and the entire crew at Cascade Games delivered an excellent tournament experience. That's not to say there weren't some tough decisions that had to be made regarding preregistration and putting a cap on attendance. We appreciate everyone's patience and cooperation in our attempts to ensure the best possible tournament experience.

To run an event like this, you need a talented, dedicated judge staff, and that's exactly what was on display at Grand Prix Las Vegas. The crew of 160 judges, led by head judges Toby Elliott and Jason Lemahieu, worked tirelessly to ensure things ran smoothly. The next time you meet a judge who was part of this group, show your appreciation for that hard work (it's not a bad idea to thank your local judge for his or her efforts even if he or she wasn't part of the Vegas team!). These unsung heroes show devotion above and beyond the call of duty to help make tournament Magic run as well as it does.

With that solid foundation in place, the Grand Prix was ready to provide the fun, exciting experience we knew it would. That experience wasn't limited to the 4,492 players on hand, either. We streamed twenty-two hours of live coverage on Twitch.tv to an audience of more than 140,000 unique viewers tuning in for an average of an hour apiece. On DailyMTG.com, Grand Prix Las Vegas's text coverage received double the average traffic for a Grand Prix.

This continues our strong trends of growth for live coverage. Grand Prix are averaging 100,000 unique viewers in 2013, and a staggering 1.08 million hours of live Grand Prix coverage have been watched across fourteen events.

But the coverage wasn't limited to the official channels. As the Grand Prix grew into a full-fledged "Event" toward the end of last week, Twitter erupted in activity. The #gpvegas hashtag was used nearly 5,000 times from Wednesday through Sunday, as people shared their stories, asked questions about the event, cheered on their favorite players, and became a part of this unique experience.

So for everyone who was a part of the Grand Prix Las Vegas spectacle, we offer a heartfelt thank you for your dedication, passion, and love for Magic: The Gathering.

Magic Design A to Z, Part 3 by, Mark Rosewater

These last two weeks (Part 1 and Part 2), I've been telling design stories about 26 cards starting with A and ending with Z. Last week I got up to Q, so this week we start with R. Rofell...