The Holiday Cube—or Cube format in general—and Commander may be new to you. Or maybe you know of them but haven't tried them yet. These formats are great fun, and they are terrific ways to throw a little variety into your Magic gaming. 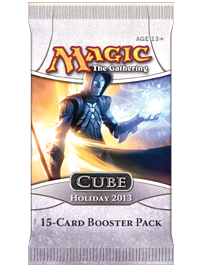 "Cube" refers to the stack of cards selected for the format—in face-to-face Magic the stack resembles a cube composed of at least 360 cards with no duplicates. The Magic Online Cube is made up of digital cards, and these are randomly divided into fifteen-card Cube booster packs used for drafting. Cube Draft encompasses many of the most enjoyable aspects of Magic: The Gathering, combining elements of both Constructed and Limited play, trading, and playing the game with friends.

The Holiday Cube is Magic Online's seasonal spin on the Cube format. Every year, it's a big hit with players, and every year it changes, offering a new experience each time. R&D's Max McCall gave us an in-depth look at this year's Holiday Cube and its monocolor strategies in his article, "Merry WUBRG and Happy New Cube ."

It's a tradition with each Cube to also have a paired Draft event to go along with it, and this holiday is no exception. In fact, this year's is exceptional. Now through Tuesday, December 24 (ending at 9:00 a.m. Pacific), join the Flashback Draft for Mercadian Masques block! When that one ends, the next Flashback Draft begins on December 24: Urza's Saga block, which will run until Magic Online's downtime on January 9, 2014.

Commander is a rule set for Magic that lends itself well to multiplayer games. The format was created by players, and a player group still maintains its official ban list. In Commander rules, each player has a starting life total of 40 rather than the usual 20. A player chooses a legendary creature, called a commander, and builds a deck that includes his or her commander. The commander is placed as the only card in the sideboard, and ninety-nine other cards (each one unique, except for basic lands) are put in the main deck. Only cards with a color identity that is a subset of the commander's color identity can be put into the deck. A card's color identity is the set of colors the card is and the colors of any mana symbols appearing on the card. For example, let's look at Jeleva, Nephalia's Scourge, one of the new commanders in the Mind Seize Commander (2013 Edition) deck. 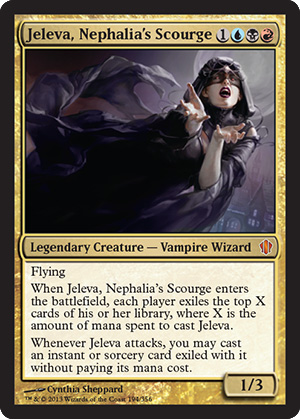 . This means that only cards with at least one of these color identities, but not

, can be included in a deck for which Jeleva is the commander.

Winning in Commander is much like other games of Magic: You must reduce your opponents to 0 life points; however, in addition to this, if a player is dealt 21 or more points of combat damage from a single commander over the course of the game, that player loses the game (a commander's total damage dealt is tracked across any zone changes—e.g., when it moves into and is cast from the command zone—for the purpose of this rule).

Building a Commander deck can be fun, but if you want to jump in and start playing, the Commander (2013 Edition) decks are ready to go for games. And these decks pack a lot of punch into a hundred cards. Just check out the decklists for these things! I mean, Baleful Strix? True-Name Nemesis? Even beyond playing Commander games, a card collection can only benefit from having these added to it. Topping them off are fifty-one new cards in these sets!

This holiday is shaping up to be a lot of fun in Magic Online. Be sure to stop in and play the Holiday Cube, and both of its paired Flashback Drafts of the Week, Mercadian Masques block and Urza's Saga block. There will be a lot of people having a blast and winning prizes playing these! Then, don't forget to visit the Magic Online Store, pick up one or two—or all!—of the Commander (2013 Edition) decks and start a game!