ello again! When we come up from the Magic Online downtime on October 31st, the Wide Beta will have some significant updates, and I'd like to share some of the new features you can expect to see when you jump into the beta client. While regular beta users will probably notice fixes and improvements throughout the client, our biggest work effort since the last big update was in the Collection Scene.

How Soon is Now?

If you build Magic Online decks like I do, you have sorely missed the "List View" feature listed as "Coming Soon" in the beta client. The good news is, soon is now! When I have a pretty strong direction for the deck I'm working on, I prefer to work in List View, where I apply some key filters like Format and Color, then sort by casting cost. While some people prefer to look at card images while they build decks, I like to have all the card names and other relevant stats in easy-to-browse columns.

In the current client, these columns were fixed in both content and location, but in the beta client, you have much more control over what columns you see and what order you see them in. Just click and drag the columns around to reorder them, and use the "»" button at the end of the header row to select which columns to show. (These choices currently aren't saved between sessions, but this feature will be coming in a future release.)

Based on my unscientific polling of Magic Online players here at Wizards, players seem pretty split between Card View and List View deck builders. Now, the List View side can build in the beta client in the style to which they have become accustomed—and then some! 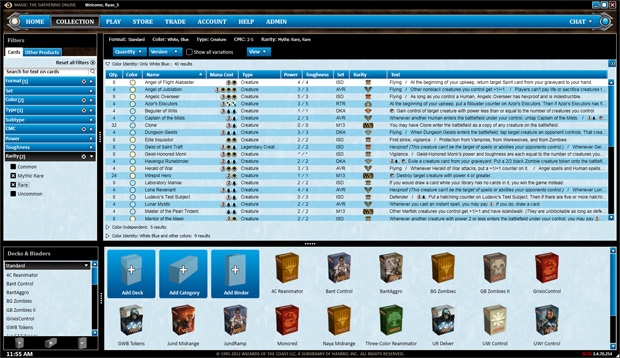 With my List View showing me a filtered set of card options, it's time to start a new deck. Until now, this has been a more click-intensive process than we'd like, due in large part to the fact that the autosave feature—while handy—requires a name and format for your deck before you can get started.

To alleviate this, you can now right-click on a card in the collection and select "Start New Deck" or drag a card from your collection onto the "Add Deck" button, and the deck name and format will be pre-populated based on your card choice in a new, more intuitive deck-creation interface. Hitting your enter key or clicking "OK" will get you started quickly on deck building with no further typing or clicking, and you can always change the name and format later. 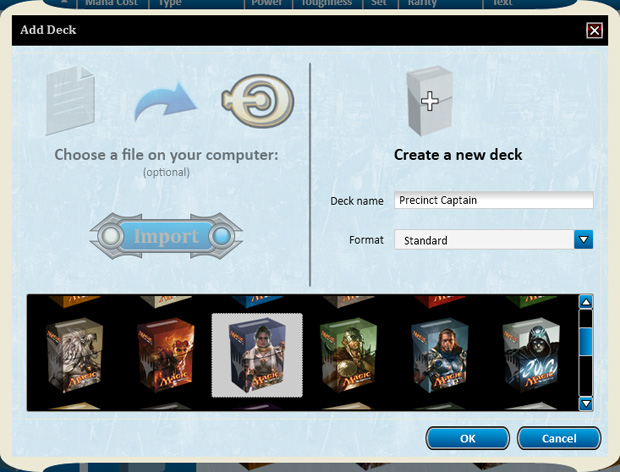 
We have also reintroduced the ability to import multiple decks from your local files using the redesigned deck creation interface as well. Now you can bring all of your locally saved decks to the Wide Beta quickly and easily, and once you do, they will all be net decks you can access from any computer!

Once I've added the core cards into a new deck, I usually want to tighten the filters a bit to narrow down my choices for those final slots. Sometimes I realize I need more creatures, other times I am looking for a card whose name escapes me, but whose characteristics I remember. Once the filters begin adding up, it's not always obvious what set of filters you have in place. To help track that, we've added a "breadcrumb trail" across the top of the collection results. You can see at a glance how your filters are set, and you can also clear a filter directly from the breadcrumb trail by rolling over a filter and clicking the X that appears.

One style of filter I used a lot on the current client was the "range" filter. Setting less than, greater than, and equal to filters to narrow down things like casting cost during deck building or quantities owned when setting up my tradables was an important tool for viewing my cards. Since the last time I wrote about the beta client, setting such ranges had taken a step backwards in the beta client, involving lots of clicks to define a range. We now have range sliders to all filters and drop-downs where it makes sense.

By grabbing and dragging the ends of a slider, you can create and adjust all the ranges you want. As someone who missed my drop-down range-setting tools from the current client, I can say that I am a slider convert in the beta client. They allow me to define the ranges I am looking for quickly and adjust them easily.

I also use the text search to navigate my card options while deck building, and there is a nice revision to the search functionality in this client update. In V3, the text search simply looks for that text string on the cards in your collection. You can still search this way in the beta client by putting quotes around any text string, but without quotes, spaces are treated like "and" for search purposes, much like any Internet search engine would do. So, if you type "wizard damage" (without the quotes) into the search field, you will find all cards containing both of those words instead of cards with the text string "wizard damage." This broadens the search potential in the beta client.

We have also included recognition of "~" as "not" and "|" as "or." Combined with using curly brackets to express things like mana symbols, where {r} means

...and you will find all cards in your collection with a red mana symbol in the rules text, but not with a green or blue mana symbol. While a bit arcane for the average user, it's nice to have some deep search options for the "power user."

Besides these bigger, obvious changes to the Collection Scene, there have been a lot of bugs and issues fixed and some less-noticeable features implemented, both in the Collection Scene and in other parts of the client. Here are some of the ones that impact the player experience the most.

There are more improvements beyond this, and for a more complete changelist, keep an eye on this forum thread, where we will share the latest updates with players when we release new versions of the beta client.

While we've made some great improvements with this release, particularly in the Collection Scene, we also know it's still not done yet. There are some Collection features we didn't quite finish in time for this release that are being worked on as I type. Other changes will come from the ongoing iteration process, and we hope you will continue to help guide that process with your feedback and testing in the beta client.

Our next work effort is focused on the game play experience, or as we call it, the Duel Scene. In the effort to maximize the space for cards on screen and to clarify which creatures are attacking and blocking, we currently have a game play experience in which the cards move around too much on the battlefield. Now that deck building experience is much improved, we are turning to this as the most important aspect of the beta client.

While we work on improving the battlefield experience, give the latest update a try and let us know what you think of the Collection changes! Your feedback continues to be valued and vital to us. Until the next milestone...

Good Luck and Have Fun!