You Make the Card 4: Name Bracket

elcome back to You Make the Card! You've all been working together to make a real Magic card, to appear in an upcoming set. Your work is very nearly done. All this card needs from you is its final name! Here's where we are so far: 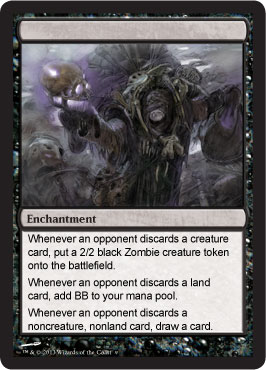 Recently, thousands of you submitted names for the card. We hired a contractor named Matt Knicl, an expert on names and flavor text, to make the first pass through the 4,245 names that were submitted. Then the creative team sat down and looked through the 200 best names and narrowed them down to the Top 8.

You may notice a familiar name on the list below. We had several requests to allow Waste Not, the card's playtest name, to appear in the final voting. The creative team deemed it worthy of inclusion, so now it's up to you!

I've received some emails about the Card Crafter achievement on PlaneswalkerPoints.com. Here's how to get the achievement: participate in the final round of voting, and a redemption code will appear. Log into the Planeswalker Points site using your DCI Number and password. Then click on the "Achievements" button near the top of the screen. You'll see a big "Redeem" button in the upper left of your screen. Click it, then enter your code into the field that appears. Voilà!

I had a chance to play with the card recently, and I have to say, it's a lot of fun! I was initially a bit skeptical about it, but I've found that it's a savage card-advantage engine that lets you play mind games with your opponent. It certainly adds a lot of kick to your discard spells.