The big story here, of course, is the relative no-show by Faeries. Only one Top 8 finish? Does that mean that people "just didn't play" the "best deck" in the format? Is that why Faeries earned half as many Nationals invitations as the Elf variants?

On the contrary, and unlike many and most results we get from around the country, continent, and even globe, this time we get a bonus look at the metagame at a bigger level than just Top 8. To wit:

So despite Faeries variants being the most popular decks in the Perth metagame—about 25 percent all told, with eight of those decks being the "traditional" Blue-Black Faeries—only one made Top 8. This is not an indictment of Faeries by any means, but something that can be taken a number of different ways. Were Faeries decks (and for that matter just plain "Faeries") the most commonly played? Yes. But both 8 out of 44 and 11 out of 44 fall short of the 40 percent Faeries predicted by some analysts... for one Regional Championship, at least. What this means is that it might not be a great idea to simply play an anti-Faeries deck... The reign of Tier Two is still too strong, and while you are more likely to battle Faeries than anything else when sitting down for Round 1, you aren't exactly favored to be playing against Faeries every round, and an anti-Faeries deck may find itself on the wrong end of Treefolk, Grave Pact, or Stuffy Doll.

While Faeries is generally considered to be "the best deck," the little black and blue flyers were significantly outperformed by the red decks and red-green aggro decks, in this tournament, at least. Several different varieties were featured in the Top 8. 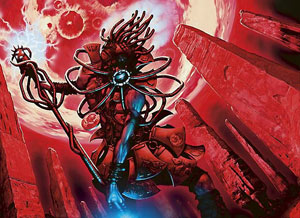 This deck differs from some of the other red decks in the current metagame in that it showcases—almost as a throwback—a full quad of Tarmogoyfs (you know, the best creature ever, the best two mana spell ever... until they printed Bitterblossom at least, you know, you've heard of him) and continues the green splash to support Treetop Village.

The drops in this deck are pretty lethal; Random Deck Wins starts on Tattermunge Maniac and Mogg Fanatic on one, rises up to the aforementioned Tarmogoyf plus Keldon Marauders on two, and finishes off the curve with three-drops, including the onetime It Girl and the now Standard-ubiquitous Magus of the Moon. Magus of the Moon is a surprisingly significant threat given the mana bases in the current Standard. The fact is that many of the top decks in the format—especially Faeries—can't really play spells when Magus of the Moon is in play. "Modern" Faeries decks have all kinds of Terrors and Nameless Inversions main deck, but not so many basic Swamps (Brandon Lau's deck, below, has seven of these spells starting but not one Swamp); that means that if they don't tap for black in response, it is not very likely that they will be able to effect a response, ever, should the Magus stick.

From the burn cards standpoint, four Flame Javelins really headline the unit, but this deck also features little Limited specialist Lash Out. A topic for numerous debates online is which card is better, Incinerate or Lash Out? If most of the burn in the format goes towards creatures, then Lash Out is typically the winner, as it does "double duty" a fair amount of the time.

This Top 8 featured three different kinds of red decks. Here is the more straightforward of the two nongreen takes:

Chan's deck is a non-obvious Goblins deck. All these creatures are just solid... It wasn't until I actually hit the Goblin Kings that I realized that Mogg Fanatic, Tattermunge Maniac, Vexing Shusher, Boggart Ram-Gang, and Boartusk Liege are all Goblins (... sorry Magus of the Moon)!

Of these the most impressive new card is Boggart Ram-Gang. I was actually talking to Josh Ravitz about trying to play Suq'Ata Lancer again (once upon a time Suq'Ata Lancer was a pretty impressive beatdown card, which old people like yours truly and whoever was working on the "timeshifted" cards from Time Spiral remember); Josh suggested we try the new card, which, Goblin or no, is probably more impressive overall due to its greater size when not blocked. This card is a full 3/3 for three mana, a rarity with no drawback in red; however it has some impressive offensive add-ons, with wither nice and haste absolutely overwhelming in a deck like this.

Dragon's Claw seems like a nice card for the mirror. In the Red Deck, you get to net life on both players' spells, which makes it more or less twice as good as when Merfolk tries the same thing. Tournament players often chuckle at life gain attempts, but in a red mirror, a card like Dragon's Claw may well be the deciding factor in which magician wins the race.

Unlike the other two red decks featured in the Perth Top 8, Malanzack's deck ran a full set of Keldon Megaliths; this card, once online, is one of the best anti-Bitterblossom measures you will ever see.

I actually like this style of the red deck best. It is more or less Terror-proof.... Aiming a Nameless Inversion or so at Mogg Fanatic is frustrating if sometimes necessary (you are on 2), and futile with regards to Keldon Marauders.

The next most populous style of deck in the Perth Top 8 was Elves... Yet, like the red decks, the Elves that showed up here were quite different from one another, and pretty different from the typical Elves that we have seen in Standard elsewhere.


As we have seen in some other Elves decks, Patty borrowed Bitterblossom from the Faeries tribe. Now, when this occurs, we all nod our heads and say yes, this is another deck where Bitterblossom can make a positive contribution... but in the back of our minds we are all worried about hitting an actual Faeries deck, where their Bitterblossom will not go unmitigated, but in fact double up with Scion of Oona, which will overpower any other Bitterblossom.

This build, though, has its own "Scion of Oona," Gaea's Anthem, which combines just as effectively with any of the deck's other creatures, maybe most impressively with Imperious Perfect, a 1/1—sorry, 2/2... sorry 3/3—producer of great impact in its own right.

David Scott's green deck could not be more different.


Devoted Druid in particular seems pretty awesome; I look forward to seeing it in many decks for the next couple of years.

Wispmare seems like the primary concession to the rest of the format. Obviously, it is a great solution to a naked Bitterblossom because you kill the enchantment... but then you still have a guy big enough to fight the remaining Bitterblossom tokens!

In addition, a deck like this with its infinite nonbasic lands probably needs a little lift against the red decks. Aven Riftwatcher is powerful, but will be shut down by Everlasting Torment. Wispmare will kill Everlasting Tormentand leave a creature big enough to walk away from a tussle with either Tattermunge Maniac or Mogg Fanatic. While it might not seem like Wispmare is the best against a red deck, I think you might be pleasantly surprised.

Sometimes you will see a reader's eyebrow rise up when he sees Sower of Temptation in a Merfolk deck. That's a Faerie. Well, yes. However, it's also a Wizard!

Merfolk, more even than any of the other tribally intense Standard decks, is stacked bottom to top with synergistic cogs. Lord of Atlantis is obvious, Merrow Reejerey a little less so, but Stonybrook Banneret helps out those two Sowers, Merfolk or no.

One of the main advantages of Merfolk is its large concentration of Dismiss effects. Recent tournament-winning Faeries decks have dipped to as few as three Cryptic Commands, but most Merfolk decks play a full four and Sage's Dousing. In a deck with a large number of Wizards, Sage's Dousing is even better than Dismiss or Cryptic Command (just imagine the Banneret in place).

The only thing I would caution you about is that this version of Merfolk lacks Mirrorweave; while not every Merfolk deck has that card, don't be surprised if the opponent can pull off a turn four kill with it. If he names Lord of Atlantis and you have an Island in play (say off of a previous Aquitect's Will), you are probably dead there and then. All the creatures in play will become Lord of Atlantis, his and yours, and all of them will pump his now unblockable foot soldiers. Say he has three guys and you have two Bitterblossom tokens... If Mirrorweave resolves and the Lord is on the loose, you are looking at 18 right there.

Saving the Best for Last?


This list is essentially the same as GerryT's from last week's Swimming with Sharks.

The plan is simple. Suspend Ancestral Vision. Resolve Bitterblossom. Let your early-game, non-mana-reliant card advantage do all the work while you hang back with flash creatures that can pick up the pace or just defend against spot removal at any time.

Faeries has a couple of powerhouse kills in Standard. One is based on Cryptic Command: Tap all their guys and attack them to death.

The best card in the deck is likely Bitterblossom. Bitterblossom is good almost anywhere you can play it, but it is best in Faeries due to the tribal stamp. Even when the opponent runs a Sulfurous Blast in response to a Mistbind Clique, Bitterblossom can help out... The Mistbind Clique can champion the stamped Bitterblossom itself! This is doubly effective when Faeries is low on life and wants to remove the suicidal Bitterblossom from the board, to keep it from chunking away a point at a time from its own master's life total.

As far as Pro Tour previews go, I would lean more on last week's Swimming with Sharks for a metagame anchor. Despite the viability and variety of Red Decks, I think that Faeries will be the most popular deck this weekend... and quite possibly the most successful. There is only one way to check that as Pro Tour–Hollywood progresses... to login to magicthegathering.com this weekend and pore over the results as they come in!