sure did like the Donate-Illusions of Grandeur combo. It's an evil pair: a card that will kill you and the means to give that card to your opponent. Pass the ticking time bomb. Well, what if both halves of that combo were on the same card? Of course, it'd be way too simple if it were an immediate game-winner, so the loss of 20 life would have to be softened by, say, a factor of 0.4. And if you can donate it, then I suppose your opponent can donate it back to you as well. Yup. We can do that. 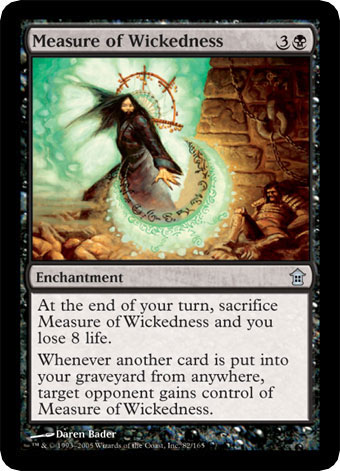 There are two words that most accurately describe this card: hot potato. Or maybe hot hand grenade. Get rid of it! It's going to blow!

With Measure of Wickedness in play, your regular Magic programming gets interrupted by the very distracting “get rid of Measure of Wickedness” game. It changes how and when you play your cards and use your resources. It affects your choices about what creatures you attack and block with. The player who included it in his deck is probably better prepared to handle it, but getting one of your own cards into your graveyard is such a common game occurrence that there should be some back-and-forth before it blows up. It's even wackier in multiplayer, and I bet Anthony Alongi would have been writing about this card instead of me if he had had a Saviors of Kamigawa preview this week. (His is next week.) Multiplayer Hall of Fame consideration, perhaps?

Can I Borrow a Cup of Wickedness?

My first thought of what to do with this card centered on cards that you can sacrifice. You have to get a card in your graveyard first to pass Measure of Wickedness along, and you want to be well prepared in case it comes back. In fact, my very first thought was Seal of Doom. Guess what? That's a very bad idea.

0 microns of wickedness: Seal of Doom

You've got Measure of Wickedness and Seal of Doom in play. You sacrifice Seal of Doom, targeting one of your opponent's creatures. That goes on the stack, then Measure of Wickedness's donation ability triggers and goes on the stack since the Seal went to your graveyard. You pass along the Measure. Then your opponent's creature is destroyed by the Seal. Uh-oh. The Measure comes right back to you.

This eliminates lots of potential cards, like Seal of Fire, and Seal of Cleansing… uh, and plenty of other stuff too. Necrogen Spellbomb or Deathmark Prelate, for example. Certain sacrifice effects still help you out, like Scrabbling Claws or Ravenous Baloth… you just need to be careful. It's too bad about the Seal of Doom, however, because I was looking forward to a Skull of Orm deck.

3 gills of wickedness: Skull of Orm

Possibly the best, and easiest, sacrifice effects are mana fixers. They thin your deck, enable your future spells, and give away Measure of Wickedness. When they have a mana cost of 0, it's even better.

Other cards in this vein give you a nice bonus for offing one of your own permanents. This includes Wand of the Elements, Malevolent Awakening, Skulltap, and…

My next thought was to combo Measure of Wickedness with cards that let you discard cards from your hand. Wild Mongrel or Compulsion, for example. It's that magical phrase “from anywhere” that lets this work, and just makes it easier for you to win the hot potato battle.

Then the lightbulb went on in my head. I was so intent on being the combo player, and finding creative ways to get cards into my graveyard, that I missed the most obvious way of all. What's simpler than sacrificing a Reborn Hero to Spawning Pit while I'm at threshold? Playing an instant. OK, the Reborn Hero-Spawning Pit combo is cool because I can do it over and over. But simply playing any instant or sorcery will move Measure of Wickedness along—and that's why it's probably coming back to you.

Why choose Refresh as the representative case for every instant and sorcery ever printed? Good question.

That Reborn Hero example raises an excellent point: Cards that regrow themselves from the graveyard give you a long-term advantage in this tug-of-war. The soulmate of Measure of Wickedness may in fact be Grim Reminder.

They're both bizarre black “direct damage” spells that really pack a wallop… if the right condition is met. The important things to note about Grim Reminder are that it's an instant, and you can play it even if you don't have a card in your deck that matches something your opponent played. Heck, you can play it even if your opponent played no spells at all. Other options here include Pyre Zombie; Sigil of the New Dawn; and Shirei, Shizo's Caretaker. Oh, and Squee. How could we forget about Squee?

There are still more strategies. Why not capitalize on all the stuff heading to the graveyard? If you're planning on repeatedly sacrificing your own creatures, Fecundity keeps the fun going. On the other hand, if you want to punish your opponent for putting his cards in the graveyard in an effort to evade the loss of 8 life, Toshiro Umezawa (creatures), Standstill (instants and sorceries), and Patron of the Nezumi (permanents) serve as stern deterrents.

Still not enough? Try this on:

And what about defensive maneuvers? How can you prevent your opponent from putting cards into his graveyard? One way is to empty his hand first. The fewer cards he has, the fewer options he has. Another plan is to use Samurai of the Pale Curtain. It can help you out if you have a spell-based or self-discard-based strategy because your opponent's dead permanents would no longer send Measure of Wickedness screaming back to your side of the table.

13 parsecs of wickedness: Samurai of the Pale Curtain

I'm positive I haven't covered everything here. That's the beauty of Measure of Wickedness: It weaves itself into the fabric of the game effortlessly, but it gives you different and more urgent goals. Can you adapt?

What happens if we put cycling, sacrifice effects, recursive sacrifice loops, bonuses for sacrificing your creatures, sweeping defense, and more direct hits to your opponent's head together with Measure of Wickedness? We get a Cleric deck. That fits: Who better to measure wickedness?

4 Measure of Wickedness 2 Wrath of God

Having a Doomed Necromancer in play and another one in the graveyard is loopy goodness. Malevolent Awakening does a similar thing; I recommend sacrificing a Zombie token generated by Rotlung Reanimator to resurrect whatever died to create the Zombie token in the first place. Of special note is True Believer—if your opponent can't target you, he can't give you back your Measure of Wickedness no matter how many of his cards hit the graveyard. Also of note is Wrath of God. If you've got the Measure on your side, Seal of Doom will donate it and pull it right back… but Wrath will just donate it. Of course, it's not nearly as good while Measure of Wickedness is sitting across from you.

4 Beacon of Creation 4 Measure of Wickedness


That's about all the wickedness I can handle right now. The options are wide open for this card, and I look forward to seeing it ping-pong around some tables real soon now.