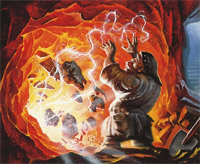 Dwarven Blastminer- the last of a proud and hairy-faced race. has not been a new dwarf card in the last 11 Magic sets. What's the deal with that? What reason could there be for the conspicuous absence of everybody's favorite diminutive dirt-digger? They're a fantasy genre staple, for goodness sake. I am going to look into this mystery and uncover the nefarious plot that is under way that is keeping the Blofus Stubblebeards and Rumpor Bristlebeards from rearing their bearded heads. Let's start by reaffirming why we all love these gruff, beady-eyed, bulb-nosed, dim-witted little beard-bearers.

The dwarf of modern fantasy has been amalgamated from old myths and faerie tales as well as more recent sources like Tolkien and our very own Dungeons & Dragons (which itself appropriated the Tolkien version of the old myths and faerie tales). I guess it is safe to say the dwarf we know today is the same little bearded guy it was way way back. He's always been a bit of a foil to graceful woodland fey like elves and pixies and faeries- burly and squat, rough around the edges, and at home in the deep dark of the undertunnels they dig. 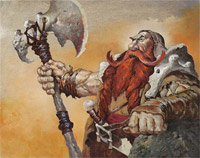 Dwarven GruntThey are a proud people, with a bit of a grudge against surface folk and people with shorn or, gods fobid, naturally hairless faces. They love their axes and their ale and all the shiny items they dig for- gold, silver, gems, and whatnot. A dwarf is like that uncle you have who comes to dinner late, but eats more than anyone and then gets a bit tipsy and starts singing old war songs before ending with a belch and a wet chuckle. You gotta love these guys.

Or do you? 10 million Moradin worshippers can't be wrong. There's something cool about them. Obviously, someone doesn't quite fancy these guys because they've been off the scene since Onslaught. Could it be that they are not as at home in Magic as they are in the tunnels of standard fantasy? Let's take a look at how they fit into Magic's scheme.

In Magic, Dwarves are red. All of them. Of course they're red, they live in the mountains. They are stonecutters and metal forgers. That's really red stuff- on the surface. And we all know how dwarves feel about stuff on the surface. Now that I think about it, just because dwarves live in the mountains it should not automatically make them red. What if everybody lived on a great big mountain, dwarves, angels, demons all. Would they all turn red? No. This reminds me of a thing we have talked about here on the Creative Team a couple times. A shark is blue, right? It's a fish, and fish are blue creatures. Or are they? Actually, a shark is nothing but a mindless eating machine, a model of nature's animalistic success. It is absolutely green in all respects. Oh, but it lives in the water. Should that make it blue? No. So, based on this same logic, the door is open for dwarves (or anything, for that matter) to NOT be of the same color as the land they live in. 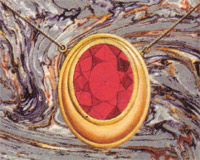 So what color are dwarves? They still could be red. They are forge-rats, and that's fire, and fire is red. But, there have been Veteran Armorer, Thran Forge, and Repentant Blacksmith in other colors. Though most are red, they do not seem to auto-red a creature that is into that sort of thing. Dwarven obsession over shiny, precious metals is a definite red characteristic. These little freaks dig and dig and dig for this stuff, never getting enough. They're out of control crazy for the stuff. Sometimes they dig too deep. That sounds red to me. What's the problem here?

Could it be that dwarves are a proud and cooperative race? Can you even imagine a dwarf mining alone? It would take him forever to just dig a hole big enough to fit his beer gut, let alone a whole mine of precious rubies! Dwarven Armorer, and Dwarven Warriors sound all rough and tumble, but they're really just helping hands. This sounds pretty white to me. Dwarven suds-hole songs are either about shiny jewels found ‘neath the dirt or “all for one, one for all” war ditties. These guys may lounge red, but they fight white. Could it be that this white tinting of fantasy's standard concept of dwarves has caused the powers that be to phase out dwarves? 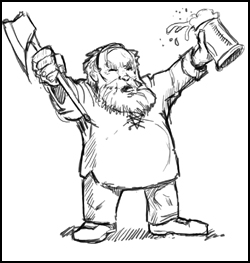 Somehow, I doubt it's just that. Other races have their bits of color bleed. Could it be that somebody doesn't think the mythology of little bearded linebackers is cool? Well, let's see if we can rework dwarves a bit, taking out the non-red elements, playing up the red ones, and chiseling off the characteristics of old lore that could be found “corny.” We'll create a new kind of dwarf that is quintessentially Magic. This should be a lot of fun. Let's have at it.

Ale-sodden Sing-alongs. There should be no explanation necessary here. One thing that is not cool is the cheesy stereotypical drunken dwarf crooning in a crude Irish-esque accent. If we “axe” this, we are swiftly on the road to cooler dwarves.

All Axes, All the Time. What's the deal with dwarves and axes? Why would a race that lives under rock ever develop an affinity for a tree-cutting weapon? Why would a weapon that must be swung wide to be effective be favored by a race that dwells in the tight confines of hewn tunnels? Why, scrapping all actual logic, would a race of any kind always reach for the same sort of weapon no matter what foe they engage? It's called shortsighted Gimli-filching. Sure, he likes his axe, but do ALL dwarves have to copy him? Rumpor Bristlebeard uses a short spear (gasp!), because he can easily skewer foes invading his home tunnel. Our dwarves are cooler already.

These Dwarves are Made for Diggin'. Why would a race that burrows underground have little natural tools for doing so? Other than the fact that they're short, dwarves have no adaptations to their own environment. OK, they can see in the dark too, but their squinty little eyes don't look anything like the eyes of an underground dweller. Our new dwarves will have larger, more light-absorbing eyeballs. Also, why don't dwarves have any natural digging capability? They're basically just short, fat humans. Let's give them slightly longer arms for reaching, and big strong hands with thick sharp fingernails for digging (in case a pick or shovel is not handy.)

Up the Obsession! Let's amp up the red in these folks. Bump up their love of precious metals to all-out obsession. They could be like little twisted underdweller crows, each out to one-up the other with a bigger pile o' loot.

To Beard or Not to Beard. That is the question. I say “not to beard.” A race that defines itself and bases its pride upon its facial hair seems really trite and thin. “Don't mess with the beard!” “Are you insulting my beard?!” “All great heroes have beards!” “Beards, beards, beards!” That sounds really lame to me. It's especially lame because other races have beards too. Let's make it so our dwarves are proud of their reckless abandon in battle and of the number of foes they have pinned to the end of their [insert sword, spear, dagger, or any other weapon that is not an axe.] Oh, and of their pile o' loot too!

Cry Anarchy! Our dwarves will also be more essentially red. They will not help each other out all the time and “stick together through thick and thin.” Leave that stuff for sappy humans. Our guys are bloodthirsty little warmongers. They are a twisted by their fiery obsession, each out to spill more blood than the next guy. Now we're seeing red!

These Dwarves are Made for Diggin' v.2. I am also confused about why dwarves are so thick and heavy. It's probably just to make them the obvious opposite of thin and graceful elves. Rubbish. They live in tunnels, they should be adapted to that life. Instead of being so broad, our dwarves will be a little more wiry. Strong and hearty, but wiry. This makes it easier for them to navigate the budding mine shafts and tunnels that they burrow out. In addition to actually being short, they naturally walk with a bit of a hunch- nobody likes to hit his head all the time. These dwarves are already more believable. This is exciting.

Wow. This all sounds like great stuff. Let's take a look at what this Metadwarfosis looks like.