Maybe they were on strike, fighting to raise their pay scale. Maybe they were finding themselves while backpacking through Europe (mostly Venice, I assume). Maybe they've spent the last few years recording their much-anticipated album, Phyrexian Democracy. I don't know and I don't particularly care what has prevented the likes of Gill McHalibut, Catfish Hunter, or even the Lord Cod Almighty from showing their finny faces. The important thing is they're back and they're better than... recently.

Luckily for the Johnny, these corally fixated, reef-dwelling, bikini-topped sea-dudes provide us with a ton of deckbuilding opportunities. Let's trawl through my inbox for ideas. If we catch some shrimp in the process, I've got the garlic sauce.

Let's dive in, shall we?

Tapping into the Power of Merfolk... Literally!

While they were taking their little sabbatical, our scaly, beflippered friends must have been making nice with their Goblin cohorts. Either that, or the Merfolk doctors aren't taking new patients. Those are the only reasons I can think of to explain why so many of the new Merfolk have the Goblin Medics "mechanic." This gives the affected creatures an ability that triggers whenever the creature becomes tapped.

Most obviously, the ability will trigger when the creature attacks. In this way, Fallowsage is like a Thieving Magpie that "steals" a card whether it connects or not. Slightly less obviously, the ability will trigger whenever you play a spell or ability that has "tap an untapped [creature / Merfolk]" as a cost. There are plenty of those kinds of cards to be found in the Gatherer database. I'll get to some of them in a bit.

Long before the complete set had even been spoiled, Noel d.C. sent me a batch of cool combos involving Fallowsage and company. The one that stood out paired the Merfolk Wizard with Champions of Kamigawa‘s Freed from the Real. Normally inferior to Pemmin's Aura, the pauper player's combo piece of choice gives you the ability to untap the enchanted creature, but more relevantly, to tap it. This means that if you have a Freed from the Real enchanting a Fallowsage, you can draw a card for each

you can pay. Similarly, you can gain one life with an enchanted Judge of Currents or enhance an enchanted Veteran of the Depths by one +1/+1 counter.

Efrén R. went one step further when he sent me this nifty little combo:

Freed from the Real + Utopia Vow + any one of the following Merfolk: Fallowsage, Judge of Currents, or Veteran of the Depths. Heck, you can choose ‘em all! By adding Utopia Vow you can cause their abilities to trigger an arbitrarily large number of times. Utopia Vow turns your Merfolk into a Utopia Tree, so just tap the creature to add one blue to your mana pool, enjoy the fruits of your triggering, and then use the blue mana to untap the creature. Flip after ten minutes. Er, lather, rinse, repeat. Surgespanner is a fine chap, but its triggered ability requires a mana payment, so infinite anything will require some more work. Of course, being able to bounce permanents every time you spend

is nothing to scoff at.

While infinite life and unlimited card-drawing are fine and dandy, having an infinitely large Veteran of the Depths (that you have pacified yourself!) is much less exciting. That's why I took Efrén's combo one step further and swapped Utopia Vow for Paradise Mantle, a piece of equipment that does everything you want it to do and nothing you don't. Paradise Mantle also solves a couple of other problems. It reduces the potential for card disadvantage that you inevitably court when you look to pile multiple auras onto a single creature. It's also colourless, eliminating the need for green. Since it costs one or less, you can tutor for it with Trinket Mage, who can also access the Merfolk-triggering Viridian Longbow and Leonin Bola.

Sygg, River Guide can both protect your pricier Merfolk and allow your Veteran of the Depths to make it through combat unscathed by giving it protection from the relevant colour or colours. Silvergill Adept is just plain good in a Merfolk deck. You will see a lot of him or her this week. Riptide Laboratory is pretty good with either Silvergill Adept, Trinket Mage, and, if we were using it, Merrow Harbinger. Last of all, I added a handful of convoke cards, since the Selesnya keyword plays nicely with the Judge of Currents et al., as well as the token-making power of Summon the School.

4 Freed from the Real

2 Trinket Mage 4 Freed from the Real

Ancient magicians are no doubt screaming out for Fallen Empires's Vodalian War Machine, which was recently made available online through Masters Edition. It's like a circus that can attack and pump itself with the help of Merfolk. You don't need to explain to me why Vodalia is a fallen empire.

They Are Are Tokens 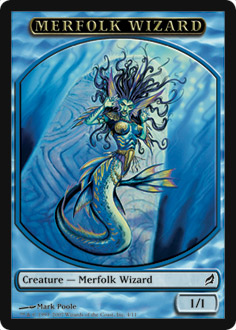 I've waited for this day for many years. Finally, we have Wizard tokens! Sure, you could make them yourself with Volrath's Laboratory, Riptide Laboratory, Soul Foundry, or some Artificial Evolution token-maker. Ignoring for a moment my attempts to start a Wizard Conspiracy with Endrek Sahr, Master Breeder, this method of producing Wizards has always seemed like a lot of work to me, and I'm unfathomably lazy. You would need Captain Nemo to plumb the depths of my laziness. That's why I love Summon the School so much. If you want a Wizard token, you just pay your four mana and get it over with. They even throw in a bonus Wizard for being such a loyal customer.

Oh, yeah. They're Merfolk, too.

There are many ways to use these token Merfolk Wizards. After his Prerelease experience, reader Evan M. wrote: "Using Drowner of Secrets, Merrow Commerce, Fallowsage, Summon the School, and Judge of Currents, I think there is some milling action that can just wreak havoc on someone's library." Take that, libraries! Evan's right. Drowner of Secrets and Summon the School allow you to mill a few cards per turn. Merrow Commerce lets you do it during your opponent's turn, while you use your own turn to do things like "regrow" and replay your Summon the Schools. Fallowsage keeps your hand full of gas and Judge of Currents basically lets you do your milling without having to worry about enemy attacks putting your life-total in danger.

The cool thing is that there are some older Wizard "lords" that allow you to tap your Fallowsages and Judges of Current for some benefit. These "lords" also love to have a ton of other Wizards around. I'm talking about Patron Wizard, Azami, Lady of Scrolls, and Supreme Inquisitor. With token producers (or even without them), Patron Wizard can lock your opponent out of playing spells, especially alongside Voidmage Prodigy (who can counter the ones that would otherwise get through). Azami + Fallowsage is, shall we say, an "inspired" combo. Best of all, Supreme Inquisitor complements the Drowner of Secrets, Summon the School, and Merrow Commerce synergy.

4 Judge of Currents 4 Summon the School

I would've included Opposition as well, but I already felt mean enough using Patron Wizard. Perhaps milling isn't your preferred path to victory. Perhaps you're more interested in setting things on fire. I'm not here to judge. What I will say is that if this is your M.O., Razorfin Hunter and Kyren Negotiations are fine choices.

Chilled to the Merrow

Of all the new tribal "lords," I think Merrow Reejerey has the greatest potential for abuse. Not only does it give the tribe another Crusade effect (that it can curve into nicely), but it also has this spicy little bit of text: "Whenever you play a Merfolk spell, you may tap or untap target permanent." You can tap down blockers or cards like Brigid, Hero of Kinsbaile. You can tap your own Fallowsage in a pinch. The crazy thing is that it can untap permanents of any kind, even lands. At worst, this thing effectively makes all of your Merfolk spells cost one less, since you can untap one of the lands you used to pay for that spell. At its best, it can be an engine for all sorts of merrow shenanigans.

And that's if you have a single Reejerey! If you have two of them in play, you can *gasp* untap two permanents every time you play a Merfolk spell. Perhaps you will untap the land you used to play your Tideshaper Mystic and untap the Merfolk Looter you used to draw it. With some luck, you can have some incredibly explosive turns.

With one Reejerey, you can play every single one-mana Merfolk in your hand and end up with all of you lands untapped. With two Reejereys, or some way to get more than one mana out of a single permanent (like a Gilded Lotus, Gauntlet of Power, or one of the Ravnica bouncelands), you can also play all of your two-mana Merfolk as well. For the next deck, I'm going to try Cloud Key, which can make most of your non–Lord of Atlantis Merfolk cost a single mana. Besides being able to plunk down a ton of Merfolk in a very short time, how else can we take advantage of all the blue spells we'll be playing? What about Quirion Dryad? There's some history between the deep-sea tribe and the Planeshift rare. Some good blood, as it were. What I ended up with is a pretty straightforward Merfolk beatdown deck with some added explosiveness.

There are so many more options. Imagine using the Haakon, Stromgald Scourge + Nameless Inversion combo with Merrow Reejerey and, say, Dimir Aqueduct. Nameless Inversion, which my friends and I have been calling "Innocent Virgin" because we talk funny in Canada, is a Merfolk. You can play it with mana from Dimir Aqueduct and untap the bounceland with Reejerey to get a full mana refund. Maybe that's gilding the lily a little bit, since the combo is already simple and powerful.

Well, how about adding some Cloudstone Curios to the mix? You could take those Merfolk and add green for Gaea's Skyfolk, Simic Growth Chamber, and maybe Sylvan Scrying to fetch the Chambers. With a bounceland, a Cloudstone Curio, and a Merrow Reejerey, you can do all kinds of crazy things. Silvergill Adept, Merfolk Traders, or Vodalian Merchant plus some other two-mana Merfolk will allow you to draw your deck and, most likely, play it. There are other Merfolk with fine comes-into-play abilities, most notably Tidal Courier and Whirlpool Warrior. There are also other Merfolk with excellent tap abilities you can abuse with Merrow Reejerey, such as Empress Galina and, uh, Benthic Explorers. I almost added Svyelunite Priest to that short list, but the newly branded Merfolk Cleric might be the worst card ever. You know you're bad when Hisoka's Guard equals or trumps you in just about every way.