ey! No time to talk! We've got Mirrodin Besieged Intro Packs to talk about! Here they are! Look! The card links won't work until we put the new set into Gatherer! Sorry! We'll do it soon! We might even have done it before you read this! In which case, never mind! 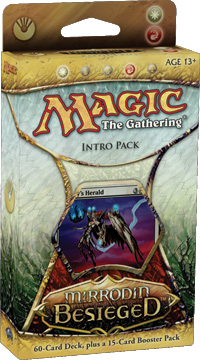 The "Battle Cries" deck hits fast and hard, swarming your opponents with an army of ragtag Mirran rebels. It's all about strength in numbers. Cards like Master's Call or White Sun's Zenith bring forth armies with a single spell. From there, summon up some Kuldotha Ringleaders, Accorder Paladins, or any other creature with the battle cry ability, and even the lowliest of your creatures will pack a heavy punch. Or call upon Victory's Herald and watch as your armies swarm over your opponents' minions from the skies.

The Myr tokens produced by Master's Call or Origin Spellbomb don't just help scale up the benefits of your battle cry creatures. They're also artifacts. This means that together with a piece of Equipment like Viridian Claw or Whispersilk Cloak, or maybe a Memnite or two, they turn on all your metalcraft cards. Make sure to seize the moment the second you have three artifacts—blast through the lines with a Concussive Bolt, or smash into the "red zone" with a Razorfield Rhino—to make sure you're getting the best from your cards.

Many cards from Mirrodin Besieged™ booster packs can improve the "Battle Cries" deck. If you want to make sure your metalcraft is always active, Silverskin Armor nets you two artifacts for the price of one, while boosting the size of any creature you care to equip. Mirran Crusader, a 2/2 double-striking creature with protection from black and green, can ward off the core Phyrexian colors while enjoying twice the normal benefit of the battle cry mechanic. Perhaps most powerfully, Hero of Bladehold, a 3/4 creature with battle cry who puts two 1/1 Soldiers onto the battlefield tapped and attacking, provides both a boost to your team and an army to receive that boost. 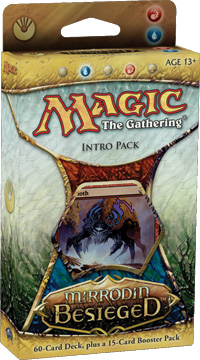 Some Magic decks win the game with powerful creatures. Others, like the "Mirromancy" deck, win with powerful spells. Burn spells like Lava Axe and Red Sun's Zenith take fiery bites out of your opponent's life total, while cards like Quicksilver Geyser and Sleep give you the time you need to win.

Small utility creatures like Blisterstick Shaman and Neurok Commando deal with your opponents' creatures and stock your hand full of threats. Don't forget that even though your Neurok Commando can't be targeted, Rally the Forces still boosts its power, grants it first strike, and allows it to win its fair share of fights.

creature, Fire Servant makes the burn spells you cast hit a lot harder. With Fire Servant on the table, Lava Axe deals a whopping 10 damage, and Arc Trail gets to deal 6 damage total.

The beauty of a deck like this is its flexibility, and it's easy to customize it. Are your opponents wielding decks full of annoying artifacts? Into the Core, an instant that exiles two artifacts, is a great answer. Are your opponents trying to swarm you with a creature rush? Slagstorm deals 3 damage to each creature on the battlefield for only three mana (or it can deal the last 3 damage to your opponent in a pinch). Finally, if the game is going long, Blue Sun's Zenith lets you draw as many cards as you have mana to pay—and shuffles right back into your deck so you can do it again later! 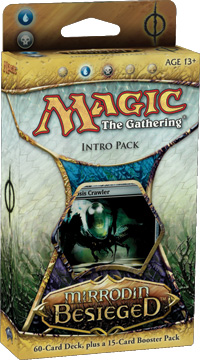 Things die when Phyrexians are involved. They die a lot. The "Doom Inevitable" deck embodies the Phyrexian hunger to consume all life. Cards like Contagion Clasp and Trigon of Corruption spread -1/-1 counters across your opponent's team, and the proliferate mechanic quickly makes those counters lethal.

As the war of attrition continues, cards like Pierce Strider and especially Psychosis Crawler put your opponents on a clock as their resources evaporate in front of their eyes. Fortunately, your creatures come out ahead when they hit the graveyard. Vivisection combines with either Oculus or Myr Sire to net you three cards and an additional bonus. As creatures are put into your graveyard, your Bonehoard grows larger and larger—to the point where another Oculus can pick it up and hit for 7 or 8 damage right away!

Your many Equipment with living weapon, such as Skinwing and Strandwalker, give you an extra creature when they enter the battlefield. These Equipment hit hard on the front end and then stick around to boost other creatures once your opponent has found a way to deal with the token. You can use other Mirrodin Besieged cards to improve the "Doom Inevitable" deck. Morbid Plunder returns two creature cards from your graveyard to your hand. Black Sun's Zenith can wipe out everything on the battlefield if you've got the mana to spend, and like all the Zeniths, it shuffles itself back into your library so that you can draw it again later. And if you really, really want to make sure that your opponent never gets ahead, Consecrated Sphinx—a 4/6 flier for six mana—draws you two cards for every card an opponent draws! 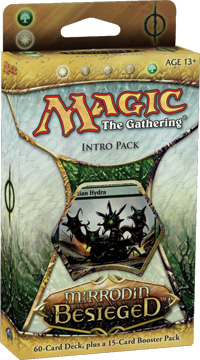 The Phyrexian infection has spread to encompass all the colors of Magic. Like any aggressive green-white deck, the "Path of Blight" deck deploys cheap creatures to the table and then uses combat tricks to ensure that your cards trump theirs. The difference is that since all your creatures have infect, they need to deal only 10 damage to your opponent to ensure your victory! If you can't get the last few poison counters using your creatures, Decimator Web can seal your victory once and for all.

Start out by casting Blight Mamba or Plague Myr on your second turn, and keep up the pressure by continuing to cast creatures like Rot Wolf and Priests of Norn. Your deck has creatures at a variety of mana costs, so you'll be able to make use of all of your mana on almost every turn.

Use your spells to make sure that your creatures can keep getting through to deal damage to your opponent. Clear blockers out of the way with a Banishment Decree, especially if it lets you push through the massive Phyrexian Hydra. If you see your opponent is planning to "chump block," use Mighty Leap to send your creatures to the air before blocking, or wait for the block to happen and then use Unnatural Predation to make that blocker less effective.

Of course, other Mirrodin Besieged cards can help you customize your deck. Creeping Corrosion, a sorcery that destroys all artifacts, is the perfect answer to any sort of artifact-based strategy your opponent may be using. And of course, the ultimate fighting machine in any infect deck is Blightsteel Colossus, an 11/11 creature with trample and infect that's capable of taking down your opponent with a single attack!