i everyone! Every time a new set is released, the Magic rules manager (that's me!) writes an article called the "Update Bulletin." It's a heads-up about all the Oracle and Comprehensive Rules changes that will be implemented with the new set. Historically, tournament rules haven't been included in this article because we tend to change them less often and in less interesting ways. Plus, if you're going to a tournament, it's likely there's a judge nearby who can explain anything if need be. 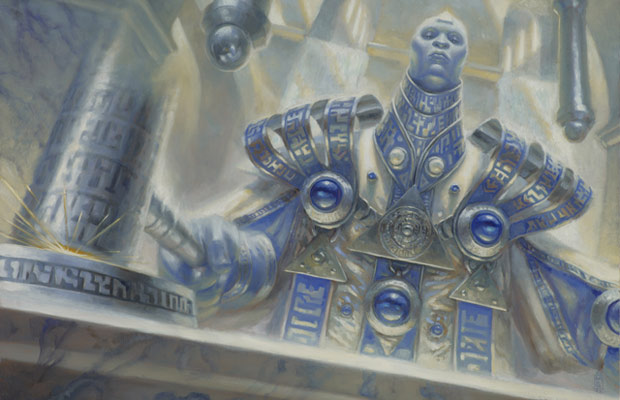 Fall of the Gavel | Art by Matt Stewart

But this update is a little different. The Missed Trigger rules in the Magic Infraction Procedure Guide have been in some amount of flux over the last few updates. Each update brought progress, but they weren't quite right. In rare cases, behavior was being incentivized that took some of the focus off of good, strategic Magic. The rules should allow you to play in a way that feels natural. Doing something that makes you feel mean should never be the correct play.

Our philosophy was sound. We knew what we wanted. It just wasn't articulated through policy in the best way possible. So, we talked to players. We talked to judges. We read articles written by the community. We read forums. We read emails. Many of you took to social media to make your voices heard, and for that we are grateful. The result is hopefully a more robust, comprehensive policy with the flexibility to deal with the near-infinite variety that's the quintessential essence of Magic. No change was made or dismissed lightly. Okay, I immediately dismissed the suggestion of Round 2 of every Prerelease being the karaoke round.

We're always going to look at ways to make the experience more enjoyable for our customers. You choose to play our game, and we want to reward you with fun. Let's face it—you could be doing laundry right now!

So, why are triggered abilities so special?

Well, they're the most likely thing to be forgotten during a game. They don't announce themselves as they go on the stack, and it's pretty easy to just skip over them. In tournaments, players have a responsibility to make sure their cards are being played correctly and not doing so should be disadvantageous. Also, we want to make sure the remedy for forgetting one is appropriate.

From the opponent's perspective, having to remind a player that he or she made a misplay occasionally is okay, but triggered abilities are far and away the most common source of this, and having to do it repeatedly can be an unreasonable burden. We'd rather have players focused on keeping the game state legal than have them worrying about their opponents' missing triggered abilities.

What kinds of tournaments do these rules apply to?

Before we dive too deep into the rules, I want to emphasize what kinds of tournaments are affected by these changes. The Magic Infraction Procedure Guide is used only at tournaments with Rules Enforcement Levels (REL) of Competitive or Professional. These are Grand Prix Trials, Grands Prix, Pro Tour Qualifiers, Pro Tours, World Magic Cup Qualifiers, and the World Magic Cup and World Championship. Everything else, including Prerelease and release events, Friday Night Magic, and that random Thursday draft at your local game store, is held under Regular Rules Enforcement Level.

At Regular REL, there are really only two "rules." You aren't allowed to miss your own triggered abilities, and your opponent isn't required to remind you about them. The second one is a change that was put in at higher RELs a few months ago. Please note that this part applies only to triggered abilities. You can't ignore rules violations. Now, your responsibilities as the opponent are the same across different types of tournaments. If a triggered ability is forgotten (or any other game error is made) and the error is discovered later, players should alert the judge. The judge will try and fix the error if possible and, if not, the game will just continue. Regular REL is all about fun and providing a casual environment where players of all skill levels and experience levels can have a good time, so missing a triggered ability isn't punished too harshly.

At Competitive and Professional RELs, we still want you to have fun, but we understand that competitive behavior is the norm. Players come to compete and test their skills and decks against the best. As I've said before, Magic is at its best as a strategic challenge—a mental battle won by tactics and skill, not semantic trickery. We want to provide a clear roadmap to what is expected of players in various situations.

So what hasn't changed?

Quite a lot! You still can't "forget" your own triggered abilities on purpose. The text of the triggered ability doesn't much matter here. If you've controlled Dark Confidant and successfully resolved its ability for seven turns in a row but now that you're at 3 life your memory gets a little faulty, expect a judge to launch an investigation.

On a brighter note, it is never an infraction to not mention a triggered ability you don't control. This change was made several months ago due to player feedback that told us players felt unnecessarily burdened by tracking their opponents' abilities. From what I can tell, it's been a popular move. As the opponent in a missed trigger situation, you are free to enjoy the benefits of silence. Of course, you are always free to point out a missed triggered ability if you want to.

While you don't have to point out your opponent's triggered abilities, you can't ignore rules violations. For example, if your opponent thinks one of his or her creatures dies in combat, but you know this to be a mistake because Honor of the Pure is on the battlefield, you are required to point it out. Not doing so is cheating.

With the exception of a couple of fiddly bits that we'll talk about below, what the judge will do when you miss your triggers stays the same. Your opponent gets to decide whether he or she wants the trigger to happen or not. The part that has changed is when the judges will consider a trigger missed and what we expect a player to communicate about it. We wanted that to match how players play the game, even if the rules to support it look more complicated on the surface.

When do I have to say something?

A triggered ability that requires its controller to choose targets (other than "target opponent"), modes, or other choices made when the ability is put onto the stack.

This one's pretty straightforward. If you have to make a choice when the ability goes on the stack, and you start responding to the ability before doing this, you've missed the triggered ability.

A triggered ability that causes a change in the visible game state (including life totals) or requires a choice upon resolution.

The controller needs to acknowledge the change or choice before taking an action that he or she couldn't take before the ability would resolve. We want to make sure that the triggered ability is actually missed, so we allow for the possibility that you may cast instants or activate abilities in response. For example, if you attack with Geist of Saint Traft and then cast an instant before putting an Angel token onto the battlefield, the rules will assume that Geist's triggered ability is still on the stack. Only after you do something that necessarily has to be after the ability resolved, like attempting to assign combat damage, is the triggered ability considered missed.

A triggered ability that changes the rules of the game.

This case includes triggered abilities like the one Pyreheart Wolf has. It changes the rules governing some aspect of the game, often attacking and blocking. You are expected to mention the ability when it first has an effect, and you must prevent opponents from taking any resulting illegal actions. For example, if you attack with Pyreheart Wolf and your opponent attempts to block with one creature, you must inform your opponent that that is an illegal block, and blockers must be redeclared.

A triggered ability that affects the game state in non-visible ways.

The controller must take physical action or make it clear what the action is the first time the change has an effect on the visible game state. Many triggered abilities, like exalted and the first ability of Jace, Architect of Thought, fall under this case. Say you attack alone with a creature with exalted. No choices are required when the ability triggers and is put onto the stack, so you don't have to say anything yet. No actions are required when the ability resolves, so you don't have to say anything then, either. (Compare this to an ability that instructs you to put a +1/+1 counter on a creature. The rules require you to actually do that at this point.) But, at some point, damage will be assigned and the triggered ability will have an effect on the visible game state, which includes life totals. This is the point when you need to say something. The bar isn't extraordinarily high here. If the creature is a 2/1 before the bonus, saying "take 3" is great, as is "plus 1 for exalted," and many other variations.

But let's say you attack and say "swing for 2." Now what? If you represent information that indicates you've forgotten the triggered ability, then you are considered to have missed it. "Swing for 2. No blocks? Ha ha! It's actually 3!" is not an angle available to you.

Were there any other changes?

The different types of cheating violations have been combined under a single infraction, Unsporting Conduct—Cheating, and it has a clearer definition. Basically, if you break the rules knowingly to gain some sort of advantage, you've cheated. Don't do that! There were weird cases where a player did something knowingly but didn't realize it was against the rules and we wanted to recognize that as a different problem.

In conclusion, or, "I couldn't think of a snappy subhead"

If you choose to dig into the policy, you'll unearth more specific examples of the types of triggered abilities we're dealing with and what to do if they are missed. Plus, you'll find some oddly specific rules to help with corner cases and weird situations. Magic is a big game. We've done our best to create a sensible policy that rewards natural player behavior. Human communication, an essential part of the game, is sometimes difficult to predict. We've got our eyes on events of every level, from your kitchen table draft right up to the Pro Tour, to make sure you're enjoying playing every time you do so. Okay, we're not actually watching your kitchen table.

If you have questions, please let the judges at your events know. But more than anything, have fun!