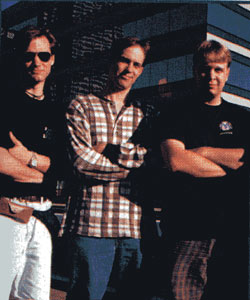 Preston Poulter at PT Atlanta way back in 1996, with fellow Pacific Coast Legends teammates Mark Justice and Scott Johns in 1996, Preston Poulter, one of Magic's first stars, ended his semi-frequent newsgroup posts with a chilling signature*:

"Abandon all hope all ye who play without Land Tax or Necropotence."

Preston's quote was one of the most important things I ever absorbed as a neophyte Magic reader. It's not, I think, that he had an overly myopic view of deck design; here Preston was in a sense a realist. Necropotence and Land Tax were at the time (between PT1 and PT2, tournaments wherein Mr. Poulter finished Top 4 and Top 8, respectively) both unrestricted card drawing engines without peer -- or mana activation costs. At least until the development of the Sligh deck, and even then only arguably, Necropotence and Land Tax-driven decks (typically G/W Armageddon or U/W Control) were just better [at winning] [tournament matches] than decks without.

What Preston taught me, personally, was not necessarily to conform. I didn't (and incidentally didn't win my first PTQ until I dug up three copies of the Skull myself for PT Dallas in the second season). He created a framework in my mind, a way of looking at constructed, and all constructed formats forever. Necropotence and Land Tax win. They are in winning decks. If you want to win, you have to play with these cards...

Or – and this was the part that Preston didn't say, at least explicitly – you have to figure out how to beat them.

With that, the week's PTQ results:

Two things are remarkable about this week's unofficial tally:

1) All the Black Hand decks in this week's tally but one were from the New Jersey PTQ; that's right: six Black Hand, two Gifts Ungiven, no Black Hand almost anywhere else... and the slot went to Gifts.

2) Even though White Weenie took a Blue Envelope, with four PTQs in the unofficial tally, the onetime best deck in the format not only didn't post one copy per Top 8... All three White Weenie decks were from the same PTQ! For an archetype of such previous renown, all I can say is, "How embarrassing."

What's not embarrassing is Shane Houston's winning list. Apparently this is what a White Weenie deck capable of competing in a Gifts field looks like:

1 Charge Across the Araba

2 Patron of the Kitsune
52 Cards

This deck has some odd choices. For example, even in a Gifts field, Houston's only Charge Across the Araba is in his sideboard. Given the need to race a deck with at least Game One inevitability, playing only two Celestial Kirins makes a lot of sense (no time for board control against the best deck)... but then why the big Fox Patrons?

What makes a ton of sense is four Dust Drinkers out of the side. These can be a big help against a long game deck like Gifts Ungiven and they really take the starch out of the comes-into-play-tapped mana acceleration and card advantage of Sakura-Tribe Elder and Kodama's Reach. If there's one thing I would really applaud Shane for choosing, though, it's his four Samurai of the Pale Curtain. A lot of players have been skimping on the Samurai this season, giving their love to Hand of Honor, spreading to three drops, and diversifying into board control... but among the potential anti-Gifts Ungiven weapons, Samurai of the Pale Curtain remains White Weenie's best. At the very least, this little Fox is an efficient attacker... But going long? There is nothing better against Hana Kami or Kagemaro recursion, especially with four copies of Otherworldly Journey for protection.

In sum, if anyone out there still doubts the power of Gifts Ungiven in the metagame, stop now. You aren't doing yourself any favors. This is where Poulter's sig comes into play: If you want even a ghost of a chance to qualify, you have to either play this great deck or be prepared, round after round, to slug through it. Every Top 8 has got Gifts aplenty, and chances are, if you want to win, you're going to have to stare down a three- or four-color combo-control deck in the finals.

Since its re-emergence, no deck has really come out of the field to legitimately challenge for Gifts Ungiven's crown. White Weenie is still licking its wounds, bitter at the loss of its onetime crown but firmly cemented in the #2 spot and not going anywhere (up). Even the decks that are supposed to beat Gifts keep finishing second. I'm not sure if Gifts is the Vial Affinity of this format, but right now, I'd put my money on the "join 'ems" more than the "beat 'ems."

That said, this week, it's much more interesting to talk about Standard. Given the foreign results out of Italy and France, here are the first Standard tallies for the 2005 Championship Season: