My Evolvement in the Prerelease

eople often ask me if, as a Wizards of the Coast employee, I miss playing in sanctioned events. While I can't honestly say no to that question, I can say that I appreciate and enjoy events in a completely different way as an official spellslinger. As a Magic: The Gathering brand manager, I am allowed to attend events at stores and participate in a unique way. Spellslinging is a term that means a Wizards of the Coast employee sets up a table at a sanctioned tournament and challenges the community to individually battle him or her in one game for a prize. Being able to engage with the community in this way is one of the many reasons I love my job. Not only do I get to play my favorite game of all time, test out the new set, and meet awesome people, but I get to see firsthand how the community is connecting with the product that I've seen so much work go into.

So, what did this mean for Gatecrash? 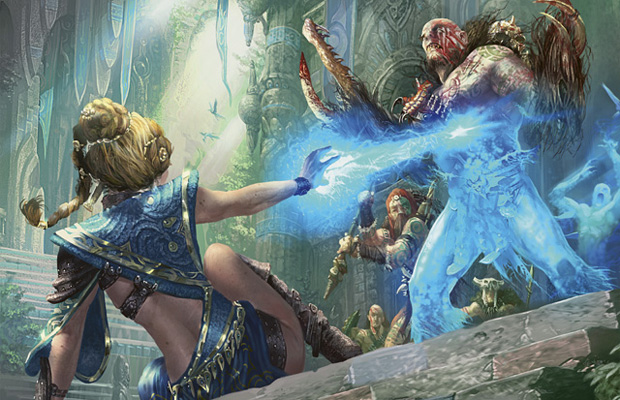 I was potentially more excited for Gatecrash than I have been for any other set. Not only was it the second set I did marketing work for, but it contains the Simic guild! I've always been a diehard green player. The first deck I ever bought was a red-green Magic 2011 Intro Pack and I never turned back. Green goes with any color, but the combo of intelligent tricks and card draw with my beloved large beasts is, to me, unbeatable. I fell in love with green-blue because of an Edric, Spymaster of Trest Commander deck, and when I learned about the guilds of Ravnica, I fell back in love—not with the cards, but with the flavor of the Simic Combine. I have a Minor in Biological Anthropology, which essentially means I studied a lot of evolution. I never intended on chasing a career in that field; I just found evolution incredibly fascinating. The fact that a group in the Magic Multiverse centered their lives around evolving during this lifetime to better themselves and their environment was the coolest thing ever! And their symbol is gorgeous. In fact, I was so impressed with Simic that I tattooed their symbol on my right arm. True story. 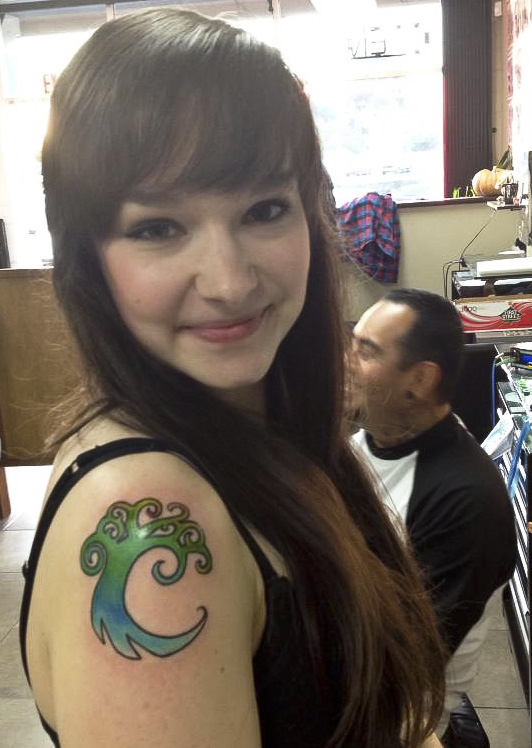 This meant I wanted to do whatever I could to participate in the Gatecrash Prerelease. Being on a cruise the week before with Michael Robles and my family made this a challenge, as I would be in Los Angeles. However, since Michael is from Los Angeles and has a good friend from high school who owns a WPN store called Hobbies & More, the possibility was still high. Michael contacted his friend and we worked with the brand team, the WPN Outreach team, and the store itself to make spellslinging happen. Visiting a store outside of our local area was an incredible opportunity that Michael and I are super happy about.

The community was extremely welcoming. The players seemed a little shy at first inviting Wizards employees into their home turf, but it wasn't long before they saw we were enthusiastic gamers just like them and they opened up to share their opinions, strategies, and stories with us. We had just met, but we all shared the same passion for Magic and that was enough. We were all just as excited to open up the awesome Prerelease packs and find out what our card-choice destiny was for the night—the first night of Gatecrash!

While I am a Simic fan, and Michael had a hard time deciding between Gruul and Orzhov, I expected to see more Boros fans than anything else. However, to my pleasant surprise, the store ran out of Orzhov packs first. It was the crowd favorite! There was still plenty of love for Boros, and many people were excited to see a fellow Simic member.

Not a soul in the room was tired and you could feel the excitement roll throughout the store. My favorite quote of the night was, "I just want to see the letter. It's all I want." I grinned heartily to myself, knowing that people appreciate the story and detail we put into these boxes. It reminded me that Magic isn't just a game, it isn't just a fantasy world, it isn't even just a community—it's a part of who we are. 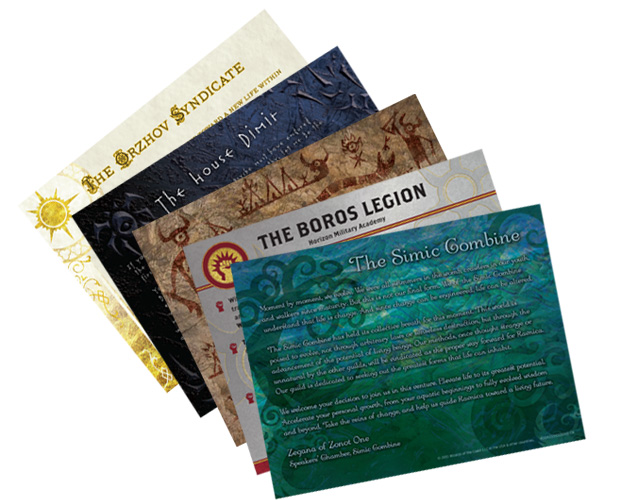 Once the clock struck midnight, it was time to open our fated Prerelease packs. I felt like a kid on Christmas busting into my Simic Prerelease pack. After listening to the energized chatter in the room and reading the guild letter from Zegana, I opened up my packs and sorted my cards. My rares were the Prerelease card Fathom Mage, Biovisionary, two Watery Graves, Deathpact Angel, Stomping Ground, and Gyre Sage. I knew for sure I would play Simic no matter what, but I must be honest, I was pretty disappointed to open Biovisionary in a Limited pool. I felt like my pool was mediocre: it held nothing that would immediately win the game but it definitely had plenty of playables. It actually took me way longer than normal to make my cuts down to twenty-three spells. The lands did open me up to potentially splash black or red in my Simic deck, however. With my pool the way it was, I decided splashing red would be easy and well worth it. This is the decklist I created:

1 Experiment One 2 Burst of Strength


Zhur-Taa Swine made the red worth it. That card did three things well: I would use bloodrush to either hit my opponent with an extra 5 damage or destroy a creature, or casting him would evolve all my evolve dudes and trigger my Ivy Lane Denizens! If any card in my pool was a game winner, it was that hungry piggy. I love Elusive Krasis, Fathom Mage, and Ivy Lane Denizen as much as I expected and intend on using them all in my Standard deck. Frilled Oculus, Simic Charm, and Ætherize all surprised me with their usefulness. I actually almost cut Ætherize, but it did win me a game.

We stayed at the store until 4:30 a.m., playing games nonstop and only taking one quick break when Round 3 started. I won about half my games and had a really difficult time against Boros. It seemed like the most powerful of the guilds at my Prerelease, with Aurelias flying around every corner of the store. It wasn't just the flying that killed me, but the constant stream of creatures that Boros supplies. Those armies were as big as mine, but their battalion abilities always seemed to push them slightly ahead. I definitely feel my Simic pride wanting to evolve my decks into beating the Boros army this Standard season. Not that the other guilds aren't threatening, themselves. One Dimir deck milled me before I could say "Ouch!" And in many games, extort proved to be a very slow and painful death that is hard to see coming before it's too late. Unfortunately, I didn't get to play against any Gruul players, but as I said, a Gruul card was my all-star. Basically, there are many new abilities I hope to try myself and crush with my ever-evolving critters.

As a hardcore player, spellslinging is fun, challenging, and a great way to spend a Saturday night. From a marketing perspective, it's fascinating exposure to real-world product engagement. Experiencing both the acceptance and criticism from our fans in real life is completely different than feedback in any other form. While other feedback is just as important and considered, it's a great opportunity to have a face-to-face conversation and overhear people discuss what they like and don't like about the cards, the packaging, and everything else that Wizards of the Coast employees pour our lives into. Making a personal connection with someone and then hearing his or her honest reactions to my company's work is enlightening. Even in the games I lost, I had a blast and enjoyed the conversations and playing my Simic-Gruul deck. I can't wait to keep playing this set and to get in some drafts of Gatecrash!

Thank you so much, Hobbies & More, for inviting us in! For the rest of the community, I hope to have the chance to spellsling with you some day. Also, I'd love to hear your Prerelease stories via Twitter!