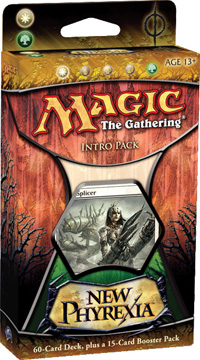 Why annihilate your enemies by hand when you can craft a magical automaton to do your dirty work for you? That's the evil scheme cooked up by the Phyrexian artificers in the "Artful Destruction" deck, and when you're playing the deck, you'll find that this is a pretty good idea!

The crux of the deck are the Splicers. Each of these 1/1 creatures creates a 3/3 Golem creature token when it enters the battlefield, and each of them grants a bonus to all Golems you control. The more Golems you make, and the more Splicers you have, the more powerful your metallic army is. Best of all, these bonuses aren't limited just to your Golem tokens. Your other Golems, such as Stone Golem and Phyrexian Hulk, get the Splicers' bonuses too!

Since both the Splicers and the other Golems are somewhat expensive, you'll spend the early part of each game developing your mana base. Copper Myr, Gold Myr, and Cultivate will all help you ramp up the amount of mana you can produce. You'll take some damage early on from aggressive opponents, but you'll more than make up for it once you start constructing your Golem army.

When you're ready to personalize the deck with other New Phyrexia cards, you might want to try adding blue to bring in Wing Splicer, which gives all your Golems flying, or Xenograft, which turns your Splicers themselves into Golems. A white card to consider is Elesh Norn, Grand Cenobite. It gives all your other creatures +2/+2, so it pumps up your Splicers and their Golems—double bonus! As if that weren't enough, it gives all your opponent's creatures -2/-2 as well! 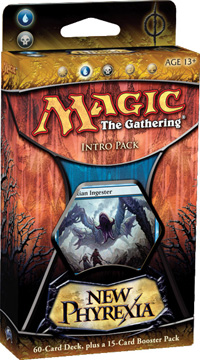 When can you be assured that no enemies stand in your way? When you dive at them from above! The "Devouring Skies" deck is loaded with creatures with flying, power-pumping Equipment, and just enough ways to keep your opponent off balance while you finish your assault.

Start things off by casting quick little fliers like Augury Owl and Hovermyr and beginning to attack. They might not deal a lot of damage yet, but every little bit helps—and once you start augmenting them with Equipment such as Viridian Claw and Warlord's Axe, they'll be carving out sizable chunks of your opponent's life total. As the game progresses, keep up the attack. Larger creatures like Impaler Shrike and Spire Monitor will join your air force. Some formidable creatures will clog up the ground, as will Equipment with living weapon.

In the meantime, use your disruption judiciously. Vapor Snag and Doom Blade get pesky blockers out of the way so you can continue your incursions. Blind Zealot and Dementia Bat can be sacrificed to deprive your opponent of key resources. It's up to you to determine whether it's more valuable to keep your creature or to sucker punch your enemy.

If you'd like to modify the deck, one option is to try some different New Phyrexia Equipment. The more Swamps you control, the more Lashwrithe pumps up the creature it's equipping. Sword of War and Peace protects your creatures from a wide range of removal spells while dealing extra damage to your opponent. And Batterskull makes any creature who's wielding it a gigantic threat, plus it can continually resupply itself with Germs! 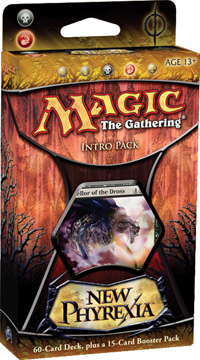 Phyrexians are among the most brutal, vicious monstrosities ever seen, and now that their victory is at hand, there's no stopping the carnage. Of course, as long as you're playing this deck, that's just the way you want it!

The primary goal of the deck is to annihilate every creature your opponent casts. Spells like Geth's Verdict, Go for the Throat, and Parasitic Implant mow down opposing creatures, often while providing an extra bonus in the process. Even your creatures get into the act: Blisterstick Shaman and Tormentor Exarch can each take out a creature when they show up on the battlefield.

In fact, not even your own creatures are safe! Casting Artillerize or Fling means you'll sacrifice one of your creatures to wipe one of your opponent's creatures—presumably a better one—off the map. This is a war of attrition, and as long as you keep all opposing forces nice and dead, any attack you can muster is sure to go the distance. Or you can just keep the battlefield clear, knowing that eventually Chancellor of the Dross or Shrine of Burning Rage will show up to finish things off.

Some other New Phyrexia cards that would fit right into the deck include Dismember, which is yet another way to efficiently axe a creature, and Sheoldred, Whispering One. This 6/6 Praetor lets you continually reclaim your dead creatures from your graveyard so they're ready to be sacrificed for the cause once again, while also forcing your opponents to sacrifice their own creatures turn after turn.

1 Chancellor of the Dross 1 Tower of Calamities
60 Cards 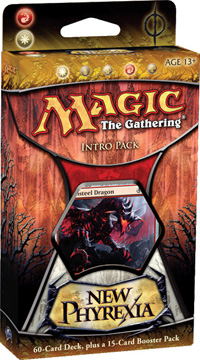 "Phyrexian mana" may be the most diabolical advance the Phyrexians have ever created, and this deck is filled with it. The red Phyrexian mana symbol is (P/

), and you can pay for it by spending

or by paying 2 life. So, for example, you can cast Moltensteel Dragon, a mighty 4/4 flier, as early as turn four by spending

and 4 life. And you should! This deck rewards aggression. Pay life early and often, casting Porcelain Legionnaires for two mana, Slash Panthers for four mana, and Gut Shot for no mana at all! If you can afford the extra mana, go ahead and pay it, but never wait an entire turn to get your creatures on the table.

Commodity trading is a two-way street, of course. Though the deck freely gives up its own life, it has many ways to earn it back. Whitesun's Passage restores 5 life just like that! Kemba's Skyguard brings you a gift of 2 life when it shows up. And you can tap Pristine Talisman for both mana and life every turn.

You may want to add even more Rage Extractors to the deck—all those spells you cast that cost Phyrexian mana can cause it to deal a hefty chunk of damage! Other New Phyrexia cards worthy of consideration include Surgical Extraction, which can rip your opponent's deck apart, Tezzeret's Gambit, which draws you extra cards, and Phyrexian Metamorph, a versatile Shapeshifter. None of those cards are red or white, but that doesn't matter. All of them have Phyrexian mana in their costs, and you've got life to spare. 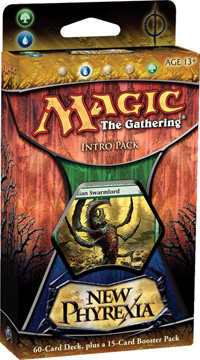 Even though the Phyrexian takeover of Mirrodin is at hand, not everyone has fallen prey to the Phyrexian contagion. That's where you come in! With the "Ravaging Swarm" deck, you'll spread the disease to anyone who would still dare to oppose you.

The deck starts off as quickly as possible, preferably with early Glistener Elves and Blighted Agents on the first couple of turns. Since they have infect, each time they deal damage to your opponent, that player gets a poison counter—and since it takes only ten poison counters for a player to lose the game, you're well on your way to victory!

A number of cards in the deck, such as Phyrexian Swarmlord and Mycosynth Fiend, get powered up if your opponent is poisoned. Even a little disease pays big dividends! And cards such as Viral Drake and Plaguemaw Beast let you proliferate, which increases the number of poison counters your opponent has, one . . . by . . . one. Once the infestation takes hold, there's no cure.

After you've played the deck a few times, you'll want to put your own stamp on it. Look for cards that pump up your infect creatures' power. Spells such as the Magic 2011 core set card Giant Growth are a good way to do that, as are Equipment like the Mirrodin Besieged card Sword of Feast and Famine. Alternately, planeswalkers such as the core set's Jace Beleren are a great way to take advantage of the proliferate abilities in the deck, since proliferate works on loyalty counters too.