A New Season of Law and Order

been seven years, so forgive me if I get the details wrong. As this aged and likely addled brain recalls, my old friend Bill Macey was running hot in the midnight Grinder. The year was 1999, and the event was U.S. Nationals. To be more precise, the last U.S. National Championship of the 20th would be contested later in the weekend, but Bill was vying for one of those extra spots Wizards of the Coast dangles in front of the unqualified players via single elimination tournaments during the days leading up to the big show.

Bill was playing "Moa-Boa" a strange Green or White weenie deck with its genesis in the wilds of Wisconsin, and not the Maher side if you know what I mean. In those days you could play Yawgmoth's favorite card advantage engines - Bargain or Will, or preferably both - but predictably, Bill went beatdown. Beatdown decks, regardless of color, could play Cursed Scroll... Bill didn't. Instead, he spent the long hours before morning enhancing his River Boas and Soltari Priests with - I kid you not – Hunting Moa (hence the strange deck's strange, if appropriate, name).

After several rounds of lucky and tight play, Bill fell one or two rounds before qualifying, to a Mono-Red Sligh deck.

"That isn't going to happen again," he decided.

Bill was a veteran of the U.S. Opens. Years before we had become friends, I remembered seeing his name in one of the old Duelist Sideboards, the only player to grind into the U.S. National Championship not playing a Necropotence variant.

"You can play Waylay. Waylay is good against Sligh..."

"My deck is good against Sligh."

"That's not enough. It's not enough to be good. They can't kill my Soltari Priest but I can't block with it, either."

"That isn't going to happen again. 'Good' is not enough. I am going to crush them."

"Well there is this new Waylay trick that..."

I went to sleep. I had been up most of the night watching the midnight Grinder cut down to John Shuler (Malka Death) and Jamie Parke (Sped Red). I woke up in time to stumble into the tournament ballroom to wee Bill putting the finishing touches on his Grinder win, Paladin en-Vec powered up by Yavimaya Hollow, tapped in the Red Zone.

It is seven years later, and Paladin en-Vec is considered one of the strongest creatures in the current Standard format.

You can tell that Paladin en-Vec is special for one reason, and it's the same reason I didn't want Bill to play that card back in 1999: Players are willing to pay three mana - two of which are color-specific - to include it in their decks. This might not seem that big a deal for those of you who might not be that discriminating in your selection of individual cards, but all you have to do is look at one of the current format's Boros or Orzhov decks to see what a commitment Paladin en-Vec really is.

You see, we constantly talk about how the Boros deck is about 20 2/2 creatures (pretend, per usual, that Savannah Lions is a 2/2), and that they are all the same... But that's really not the case. Paladin en-Vec has no more or less power than any of the creatures one third its cost, but the Maximum Number is universally played. Players move their Eight-And-A-Half-Tails between main and side, cut Kami of Ancient Law or sub in Ronom Unicorn; they remember that Samurai of the Pale Curtain is still legal and a murderer of Morning, Tide, or Evening Stars... or don't. They never mess with the Paladin.

Hand in Hand, that red-headed stepchild of Orzhov variants, the only one without a gimmick, no Tallowisps, no Nantuko Husks, has bent its mana for months, running

one- and two-drops, nevertheless expecting to hit the

on turn 3 (which, incidentally, makes for one heck of an Okiba-Gang Shinobi Red Zoning for five on four)... Why do they risk it? Why do they bother?

Paladin en-Vec has Protection from Red. 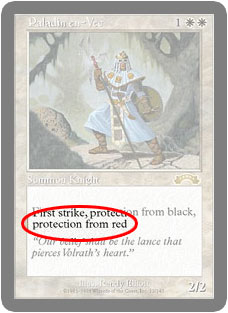 In Standard, the effectiveness of Protection from Red (and to a lesser extent, Protection from Black) is that you can reliably put Umezawa's Jitte on Paladin en-Vec and expect to make it into the Red Zone (there are no such guarantees for any other small creatures in this land of Lightning Helix and even Char). On the ground, equipped or not, Paladin en-Vec will hold off Rumbling Slum forever and frustrate anyone unlucky enough to be holding a Giant Solifuge into not playing it at all; the First Strike is especially important in this fight because it stops the Solifuge from inflicting any Trample damage should a tussle ensue.

Because it has First Strike, Paladin en-Vec can line up Jitte counters before the opposing creature has dealt any damage, winning fights with unusual speed and swordsmanship, and ultimately serving as the inspiration for Tsuyoshi's quote. I know what you are thinking right now: You don't have to sell me on Paladin en-Vec like your friend Bill couldn't sell you. I read Swimming With Sharks and every Top 8 list I can find! But by the time whatever card you are previewing hits Standard, there isn't going to be any Umezawa's Jitte!

True enough! Sadly or not, Umezawa's Jitte will in fact evaporate from Standard with the coming of Time Spiral… But, maybe like boob tube juggernaut Law & Order, Paladin en-Vec can trade in one awesome sidearm for a different – still quite serviceable – sidekick. 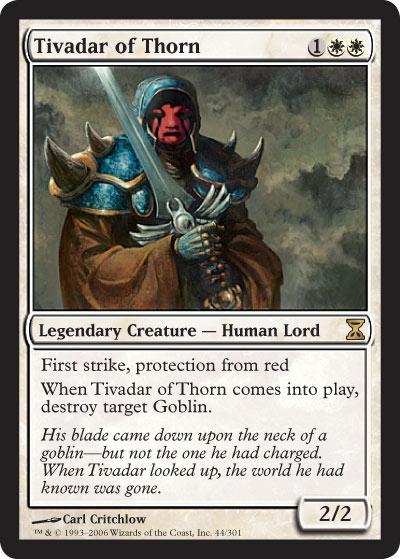 It stands to reason that Tivadar of Thorn will be a fine complement to Paladin en-Vec wherever Paladins are played, and played over the “original” a fair amount of the time in those strange places where Paladin en-Vec is not currently kicking down the doors to speakeasies and houses of ill repute. Tivadar of Thorn lacks Protection from Black, and is therefore less relevant in Standard where B/W is a heavily played color combination, but the Legendary Lord remains very strong on the fundamentals… Tivadar can still cuff the snot out of Dark Confidant, Jitte in hand or no.

People don't play very many Goblins in Standard just now, so barring some big Sparksmith, Warchief, or Ringleader incentives out of Time Spiral, Tivadar of Thorn will basically never get to show off his White Nekrataal side. Vore decks are not going to be siding their Goblin Flectomancers in against any deck that can conceivably play Tivadar (which, we would assume, wouldn't be playing, say, Compulsive Research). It stands to reason that Gruul might side in Tin Street Hooligan against some kind of Sunforger or that Tivadar might backhand the aforementioned 2/1 with his Masque of Red Death against Zoo in the main, but without heretofore unrevealed shakeups, Standard will not be the battlefield where this card's Protection from Black trade-in will shine. 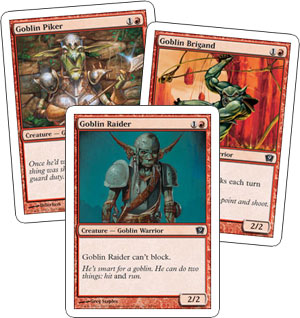 Why doesn't anybody love us?The Boros decks of Extended started with no Silver Knights when Tsuyoshi Fujita made Top 8 in Honolulu, and slowly acquired more and more Silver Knights in their sideboards and even main decks until the only logical direction the archetype could go was Paladin en-Vec inclusion. It may be difficult to see why Silver Knight was so good, or as a corollary, why someone might be willing to pay three mana for a 2/2 in a format where he could get a Psychatog. Boros Deck Wins was a massively popular Extended archetype after Tsuyoshi's Top 8 finish, a Top 8, remember, that featured two other straightforward Red Decks. In a Red Deck or Boros mirror fight, Silver Knight was basically unbeatable. You couldn't get past it with any drop, and you couldn't easily block it. This card was a tremendous asset in tempo, and Paladin en-Vec, even at a premium, represented more of the same. In Extended moving forward, Tivadar of Thorn may just be better than Paladin en-Vec at fighting other Red variants. No one picks Extended creatures for their Protection from Black – relying on that will just have Hand of Honor or White Knight looking skyward as Psychatog kills them riding an Incarnation – but Tivadar of Thorn, beyond the Protection from Red that is already so appealing, will come smashing Goblin Legionnaires on the way down.

Once upon a time, Goblins – in large part featuring zero Leginonnaires – was the most popular archetype in Extended. The allure of powerful cards in a synergistic tribe seduced scads of PTQ players, and between their lightning speed and veritable toolbox, we can say “with good reason.” However last year, the loss of AEther Vial proved too much, and the Goblins fell from popularity… Not so in Legacy. In Legacy, a format that Organized Play finally chose to recognize with Premiere Events last year, Goblins is still one of the most popular, defining, decks. Between Goblin Lackey and AEther Vial, Goblins is faster than it has ever been in any other format… and the promise of four- and five-drop killers at no mana investment proves the archetype overwhelmingly lethal. So great is the popularity of Goblins that some White players have chosen to play Tivadar's Crusade as a sort of cheaper Wrath of God, just to keep pace. For the same price, these players can get the man behind the Crusade. Instead of blowing up all Goblins and potentially allowing the Goblin player to reload anyway with his array of tempo and card advantage Goblins, Tivadar just takes out the scariest Goblin and then holds off the rest of the forces while his legions of Knights of Thorn set up to take it in the mid-game.

You didn't actually mean us, did you boss?